Growing up, what kind of toys did you play with? If you are a boy, did you play with trucks, action figures, toy weapons, or sports equipment? If you were a girl, did you play dress-up, play with dolls, or pretend kitchen sets? If you said yes to any of the examples, there is nothing wrong with that, but if you feel that those are the only types of things boys or girls should play with, it is most likely because you have been taught that that was the acceptable thing to believe.

As we grow, we learn how to behave from those around us. At a very early age, children are introduced to certain roles that are typically linked to their biological sex. The term gender role refers to society's concept of how men and women are expected to act and how they should behave. These roles are based on norms, or standards, created by society. In American culture, masculine roles are usually associated with strength, aggression, and dominance, while feminine roles are usually associated with passivity, nurturing, and subordination. Role learning starts with socialization at birth. Even today, our society is quick to outfit male infants in blue and girls in pink, even applying these color-coded gender labels while a baby is in the womb.

And when we think back to the toys that we played with growing up, we also learned certain gender roles. The types of toys that we mentioned that parents give their daughters often teach them that their role is to be nurturing or delicate and that the role playing they engage in is to take care of others or may be too fanciful to be useful in real life, like being a princess. Meanwhile, the types of toys that parents give their sons, like trucks, toy guns, and superhero paraphernalia, are meant to promote motor skills, aggression, and solitary play.

Furthermore, playing with things that promote aggression often leads to us hearing the phrase that 'boys will be boys,' which is often used to justify behavior such as pushing, shoving, or other forms of aggression. The phrase implies that such behavior is unchangeable and something that is part of a boy's nature, and boys and men accept that behavior because it meshes with the cultural script for masculinity. The 'script' written by society is in some ways similar to a script written by a playwright. Just as a playwright expects actors to adhere to a prescribed script, society expects women and men to behave according to the expectations of their respective gender role. Scripts are generally learned through a process known as socialization, which teaches people to behave according to social norms. 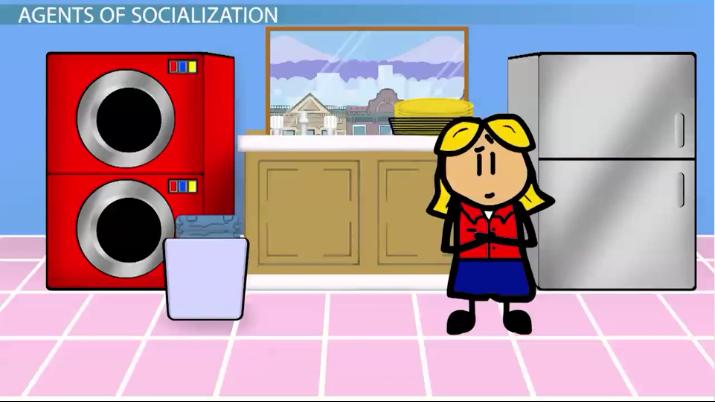 Coming up next: Theoretical Analyses of Sexuality

We've already said that children learn at a young age that there are distinct expectations for boys and girls and that one of the earliest ways that they learn gender roles is through play. And as children get older, gender roles continue to be reinforced by different groups. We call the groups that promote or enforce social norms and roles agents of socialization. Gender socialization occurs through four major agents of socialization: family, education, peer groups, and mass media. Each agent reinforces gender roles by creating and maintaining expectations for gender-specific behavior.

Family is the first and most influential agent of socialization. The gender roles that a child learns here set the tone for the child later on through life and make it increasingly difficult for a child to later change their thought process. There is considerable evidence that parents socialize sons and daughters differently. For instance, boys are allowed more freedom and independence at an earlier age than daughters. They may be given fewer restrictions on appropriate clothing, dating habits, or curfew. Sons may also be free from performing domestic duties, such as cleaning or cooking and other household tasks that are considered feminine. Daughters, on the other hand, may be limited by their expectation to be passive and nurturing, generally obedient, and to assume many of the household responsibilities.

And even when parents set gender equality as a goal, there may be underlying indications of inequality. For example, when dividing up household chores, boys may be asked to take out the garbage or perform other tasks that require strength or toughness, while girls may be asked to fold laundry or perform duties that require neatness and care. It has also been found that fathers are firmer in their expectations for gender conformity than are mothers.

Once a child reaches school age, school then becomes a major location where gender roles and stereotypes are reinforced. Think of the reinforcement of gender roles as increasing in strength as a person ages. Presumably, each child is most likely bringing their stereotypical view of the world that they learned as a child from family into the central location of a school. Now, not only have children learned gender roles in their families, but now they are being reinforced by other children who were raised similarly. In the past, schools have been known to reinforce gender roles by encouraging girls to take home economics or humanities courses and boys to take math and science courses.

Today, gender socialization still occurs in school but perhaps in a less obvious form. So, it may not be the school itself that is reinforcing gender roles, but rather the peer groups within the school that do. For example, when children do not conform to the appropriate gender role, they may face things like being criticized or excluded by their classmates. Though many of these sanctions are informal, they can be quite severe. For example, a girl who wishes to take karate class instead of dance lessons may be called a 'tomboy' and face difficulty gaining acceptance from both male and female peer groups.

Lastly, mass media serves as another significant agent of gender socialization. In television and movies, women tend to have less significant roles and are often portrayed as wives or mothers. When women are given a lead role, they are often one of two extremes: a wholesome, saint-like figure, or a malevolent, hypersexual figure. Television commercials and other forms of advertising also reinforce inequality and gender-based stereotypes. Women are almost exclusively present in ads promoting cooking, cleaning, or childcare related products. Think about the last time you saw a man star in a dishwasher or laundry detergent commercial. In general, women are underrepresented in roles that involve leadership, intelligence, or a balanced psyche. Of particular concern is the depiction of women in ways that are dehumanizing, especially in music videos, where the themes of violence and sexuality are quite common.

The impact on adhering to gender roles is significant, especially later on in the professional world. Men tend to outnumber women in professions such as law enforcement, the military, and politics, whereas women tend to outnumber men in care-related occupations, such as childcare, healthcare, and social work. These occupational roles are examples of typical American male and female behavior, derived from our culture's traditions. Following them demonstrates fulfillment of social expectations. The overall reliance on gender roles can also lead to sexism, which refers to the prejudiced beliefs that value one sex over another. This may cause young girls to be undervalued and lead to serious discrimination in women's social and professional lives.

From the moment we are born, we are socialized, or taught how to behave according to certain social norms. Part of what we are taught to believe is what it means to be a girl or what it means to be a boy. We specifically call these expected gendered behaviors gender roles. Throughout the course of one's life, gender roles are reinforced by four major agents of socialization, including family, school, peer groups, and the media. Sexism may lead to the discrimination of women in particular, which may keep them from being valued in their social and professional lives.

The Impact of Socialization on Gender
Related Study Materials

The Intersectionality Theory of Gender

Gender Stereotypes in the Media

Socialization Through the Life Course

Understanding the Impact of Gender Differences in Social Development

The Effect of Culture, Socialization & Culture Shock on Education

Characteristics of a Patriarchal Society