Obviously, you understand that an education is important. That's why you're watching this video. You would have made a good Jinshi. Don't worry, it's a compliment.

In Middle Imperial China, a period from roughly 618-1279, a group of people rose to a very powerful position in society. They were called the Scholar-Official class, civil servants who performed the day-to-day administration of China on behalf of the emperor. Their name came from the fact that they were highly educated scholars and acted as government officials. A few of these people worked in the imperial court, but most of them stayed in their hometowns as local government leaders. Their duties included teaching at private schools, supervising community projects, maintaining law and order, conducting ceremonies, assisting in tax collection, and overseeing imperial social welfare programs. In essence, anything that the emperor needed done in a town, the Scholar-Officials were responsible for taking care of it.

Scholar-Officials were a part of Chinese culture since the Han Dynasty, way back in the first century. They were important, but it wasn't until the Middle Imperial era that they became so widespread and so important that they became their own social class. 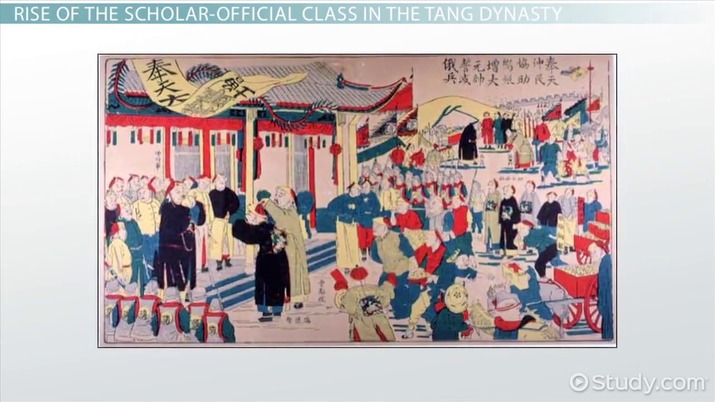 Coming up next: The Niger River: Ecosystems & Trade Routes in Africa (12th-16th Centuries)

Scholar-Official Class in the Tang

The change really began at the Tang Dynasty, a period of emperors from the same family who ruled China from 618-907. Up until this point, the Scholar-Officials were appointed by the emperor, mostly based on their connections. It was all about who you knew. In the Tang Dynasty, people who wanted to get a government job had to pass a series of rigorous tests, called the Imperial Exams. The exams tested applicants on their knowledge about government, history, society, economics, but mostly the Chinese philosophy Confucianism. Confucian philosophy had strict rules about good leadership and the responsibility of government to the people and was one of the most important teachings in Chinese society.

There were tests of different levels, which qualified people for anything from local to imperial positions. A student who passed the highest exams received an advanced degree, sort of like the equivalent of a PhD, and earned the title Jinshi, advanced scholar. To get a top government job, you had to have this degree.

The Imperial Exams changed Chinese government. Now, it didn't matter how many people you knew in the government, or how important your father or uncle or brother was; if you weren't qualified, you couldn't get a job in government. This is called a merit system, and in theory, means that China would be governed by only the most qualified administrators.

The change towards this system really took off under the reign of Empress Wu Zetian. In 655, she showered the highest imperial praise on the Jinshi graduates and opened up the examinations to everybody in China. Not just the rich, not just the people who lived near the capital city. Practically anyone in China could take the exams, and if they passed, would join the upper classes as a highly respected government worker. This meant that for the poor, who otherwise had almost no way to improve their lives, suddenly there was a promise that with enough hard work and a commitment to education, you could get out of the lower class. Enough people took, and passed, the exams to create an entire social class of people who had earned their status and wealth: the Scholar-Official class.

Scholar-Official Class in the Sung

After the fall of the Tang Dynasty, China fell into a period of war. The next family to rise to power and reunite the warring states of China came in 960 - the Sung Dynasty. They ruled from 960-1279, and reinstated the Imperial Exams. Under the Sung, the Imperial Exams became more standardized and more effort went into both writing and grading them, which reflects how important they had become to Chinese society. While Scholar-Officials in the Tang could get most jobs with the higher degrees, the Sung standardized the tests so that each one directly correlated to a level of government work. The new rules under the Sung also introduced practices like anonymous test-submissions to prevent biased grading.

The end of the Sung marks the end of Middle Imperial China. After this, the Mongol Empire invaded China and started an era of Mongol emperors of China, called the Yuan Dynasty, that lasted from 1271-1368. The Mongol emperors did not use the Imperial Examinations, but went back to filling government with family members. However, once they fell, the new Chinese emperor was determined to rid the empire of all things foreign and only keep the most purely Chinese aspects of society. The Imperial Exams, and government positions awarded by the merit system, were some of the first things reinstated.

In Middle Imperial China, which roughly corresponds to the Tang and Sung Dynasties, the rules of government changed. To get a highly respected position in government work, candidates had to pass the Imperial Examinations to prove, beyond a doubt, that they were qualified for the position. A candidate who passed the exams received an advanced degree, which qualified them for certain government positions. The highest degree gave candidates the title Jinshi. The policy that people had to earn government jobs is called the merit system. The people, who finally made it, were called the Scholar-Officials. Scholar-Officials had to be very knowledgeable about Confucianism, the Chinese philosophy that dictated moral behavior and the responsibility of leaders to the people. The Imperial Exams changed society. Suddenly, anybody could try and improve their life and get highly respected government work based on their work ethic and qualifications. This created an entire class of people who had earned their social status and wealth. Not a bad system, is it?

When you've studied the video's details, you could realize these goals: