Rebekiah has taught college accounting and has a master's in both management and business.

View bio
It is imperative for accountants to demonstrate ethics, moral guidelines that determine right from wrong, while making the financial decisions that impact every member of an organization. Learn about business ethics, the Sarbanes-Oxley Act of 2002, and why ethics are important in accounting. Updated: 09/20/2021
Create an account

Lilli is an accountant for a manufacturing company. One day her boss, Bob, calls her into his office to discuss the company's financial statements. Bob tells Lilli that he needs to impress a potential investor, so he wants her to 'fluff up' the financial statements. Lilli is shocked. She can't believe that Bob would ask her to do something like that. In her opinion, it would be totally unethical! What do you think? What do you think ethics are? Do you believe that ethics are important in the accounting profession? Let's look at a few things before you make your final decision. 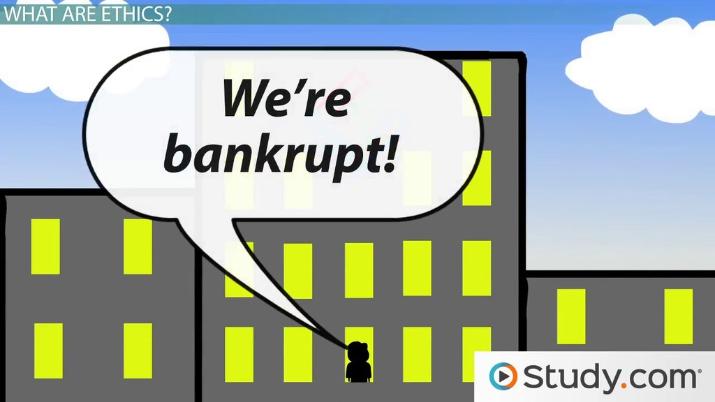 How do you define ethics? The Merriam-Webster dictionary defines ethics as the discipline dealing with what is good and bad and with moral duty and obligation (Merriam Webster, 2013). Basically, ethics means doing what is right.

There is no better way to discuss ethics and accounting than to take a look at one of the biggest scandals in the last decade - the Enron scandal. Enron was created from a merger between two companies: Houston Natural Gas (a gas company) and InterNorth (a gas pipeline company). In the beginning, Enron was on shaky ground financially. In an attempt to make the company a success, then-CEO Kenneth Lay recruited a young and shrewd business consultant. His name was Jeffrey Skilling, and he was full of ideas. Before long, the Enron company was a major player in the world of energy, dominating energy contracts, branching out to trading electrical futures, and even delving into the e-commerce world of Web-based commodities trading.

A defining moment for Enron came in the year 2000. At a meeting of stock market analysts and potential investors, Jeffrey Skilling stated that the broadband network side of the Enron business was worth over $29 billion dollars. The financial statements that Enron made available to the public supported Mr. Skilling's comments on the value of the company. People went crazy over this news, and within months, the amount of Enron stock purchased by investors had increased 50%. It's sad to say, but it was all a lie. The leaders of Enron didn't want the public to know the truth. They hid debts and losses by shifting dollar amounts to offshore accounts. They purposefully made it look as if the company was rolling in money by misstating revenue. They lied to their employees, their stockholders, and any potential investors. Was that ethical? Certainly not!

How could Enron executives pull off all these lies on their own? They didn't. They had a little help from an accounting firm by the name of Arthur Andersen. The Andersen firm provided accounting services to Enron. From posting transactions to creating financial statements, they were responsible for it all. Since that is the case, then it's obvious that Andersen executives made a conscious decision to hide the true extent of debt that Enron held. They also made the decision to provide the Enron executives with bogus financial statements that supported the boasts made by such people as Jeffrey Skilling. Why would they do such a thing? The answer is simple. The more money that investors put into Enron, the more money that went into the pockets of both Enron and Arthur Andersen executives.

It wasn't long before the Securities and Exchange Commission (SEC), alerted by the almost unbelievable statements being made by Enron executives, began an investigation into the financial practices of the company. Upon learning of the SEC investigation, two Arthur Andersen executives instructed other employees to shred all information related to the true financial status of Enron.

On December 2, 2001, Enron filed for bankruptcy, publicly revealing for the first time that financial reports had been inflated for a long time just to make the company look rich in assets. In the battle to place blame and save face, members of Enron's executive board stated that the real fault should fall on the Andersen firm for failing to notify members of the board of the questionable factors on the financial statements and for not fulfilling their responsibilities as auditors. In response, Arthur Andersen executives placed the blame on Enron itself for having a faulty business plan that caused the company's demise.

Regardless of the blaming game, key members of Enron's executive leadership committee, as well as those of the Arthur Andersen firm, were convicted of felonies for their roles in the scandal. In addition to that, the Andersen firm had to surrender both its CPA licenses and its right to practice to the SEC.

Why Are Ethics Important in Accounting?

What are some of the unethical actions that occurred with Enron and Arthur Andersen? Overstating assets and profits was unethical, as was reporting items that didn't exist. Lying to potential investors was unethical, and so was lying to employees. Shredding financial documents was unethical. Hiding debts and losses in offshore entities was unethical. Another highly unethical action was the partnership in planning the financial fraud scheme that occurred between Enron executives and Arthur Andersen executives and the intent that these individuals had to grow rich on the misfortune of others.

The Enron scandal brought the need for ethical practices in accounting to the forefront. Within months of Enron's downfall, a new law was set in the United States to protect individuals from predatory practices like that of Enron and Arthur Andersen.

This law, the Sarbanes-Oxley Act of 2002, mandates that top-level executives in a company must certify that financial information is accurate. In addition to that, the Sarbanes-Oxley Act (also known as SOX) established not only what types of financial records must be kept, but also the length of time that these records are to be kept. SOX also made the penalties for noncompliance more severe than ever before. SOX is administered by the Securities and Exchange Commission.

The information that accountants know about their clients goes far beyond what their favorite ice cream may be or what size shoes they may wear. This information is vital to the well-being of the client as well as anyone who depends on that client. For that reason alone, ethics are important in accounting. Unethical practices can and do lead to criminal charges, organizational demise, and the loss of trust of potential investors.

Ethics are the moral obligations of being able to tell right from wrong. For those working in the accounting industry, ethical decisions must be made every day. For the most part, the decisions made are the right ones. At times, as shown by the Enron and Arthur Andersen scandal, wrong decisions are made. These wrong decisions affect everyone from company owners and executives down to potential creditors and investors and everyone in between. Laws like SOX exist to help keep unethical accounting practices from happening. Even so, they still do.

Let's look back at Lilli's situation. Remember that Bob has asked her to alter financial statements to impress a potential investor. Now that you've learned what ethics are and what part they play in accounting, what do you think Lilli should do? The answer is simple. The only ethical, and legal, decision that Lilli can make is to stand her ground and refuse to 'fluff up' the financial statements. In the long run, she will have done the right thing not only for herself but also for the potential investor and every other person who has a stake in the company.

Upon completing this lesson, you will be able to:

Ethics in Accounting - A Business Case

The following business case provides students will a real-life ethical dilemma related to accounting. They are expected to use their knowledge obtained in the lesson to approach this case.

You are a newly graduated accounting clerk working at Big Bad Wolf Corporation. You have student loans to pay off, so you're happy you finally have a job and can pay down your debt. You've been working at Big Bad Wolf for three months now, and you're busy with the preparation of the financial statements for 2019. You're approached by the chief financial officer, the person who interviewed and hired you. He says:

"Listen, I need a little favor. I know you're in charge of entering adjusting entries in the accounting system. Can you enter this one?"

"Look, don't ask questions. I know what needs to be done."

You decide to go one step further and explain to him you know that the bonds have a maturity of five years and should not be classified as short-term. He replies to you:

"Alright. I don't know how you knew that, but you have to keep it quiet. We are breaching our debt covenant and need to boost our current ratio; otherwise the bank will call our loan, and we'll be out of business. And yes, that means that you'll lose your job. I don't want you to lose your job, so help me out, okay?"

Auditor Role & Responsibilities | What is an Auditor in Accounting?

What is Accounting? | Importance & Purpose in Business

Partnership Types, Formation & Examples | What is a Partnership?

The Importance of Ethics in Accounting
Related Study Materials

Auditor Role & Responsibilities | What is an Auditor in Accounting?

What is Accounting? | Importance & Purpose in Business

Partnership Types, Formation & Examples | What is a Partnership?