Olga is a registered PRINCE2 Practitioner and has a master's degree in project management.

Sometimes, the decision cannot be reached in one go. Instead, you make a step-by-step progress towards a solution. Explore the incremental model and its three phases of decision-making.
Create an account

Instead of making one huge leap towards solving a problem, the incremental model breaks down the decision-making process into small steps. The process of then moving between the steps is known as muddling through and is based on the combination of experience, intuition, guessing, and using different techniques. This model was developed by Charles Lindblom.

A small number of alternatives and consequences are considered at each stage of the decision-making process. As a result, the costs of making a decision are minimized. As each step is proposing only a small change; the immediate effect is minimal and usually not disruptive. Other benefits of the incremental model are its simplicity and flexibility. Because the difference between status quo and proposed solution at every stage is small, it's often easier to reach a consensus between different stakeholders, and conflict is avoided.

Let's also consider the drawbacks of this approach. Limiting the number of alternatives and consequences considered naturally creates a possibility of missing the best possible solution. Instead, decision-makers usually settle for an acceptable 'good enough' option, and the quality of the final decision lowers. It's often impossible to roll out a radical proposal using this approach, since the change at every stage has to be small. The incremental model will work only for situations where continuous decision-making and implementation are acceptable.

The incremental model is often used in the public sector, where significant changes are likely to cause public dispute, and in software development, where bite sized changes help to avoid big and costly mistakes. 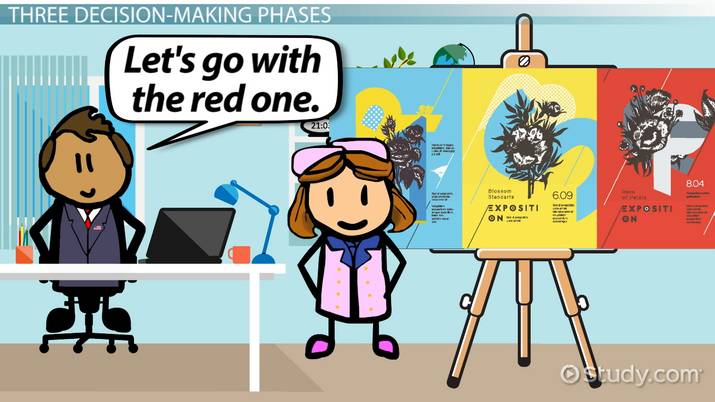 Coming up next: The Garbage Can Model of Decision Making

The small steps of the incremental model are split into three distinct phases, each consisting of several steps:

The incremental model splits the decision-making process into smaller steps. These steps occur in three phases: identification, development, and selection. The decision-makers are not fully rational and consider only a limited number of alternatives during each step. The process relies on muddling through, including the decision-makers' experience and intuition, rather than on formal procedures.

The Garbage Can Model of Decision Making

The Effects of Financial Statements on Costing Methods

The Executive Branch of the Federal Republic of Germany

The Rational Decision Making Model: Steps and Purpose in Organizations

Introduction to the Principles of Project Management