The Industrial Revolution, spanning from the late-18th to the mid-19th century, was an era that saw major advancements in production, technology, manufacturing and much more. This lesson will explore the key developments that arose during this period and how the Industrial Revolution impacted innovation around the world. Updated: 10/04/2021
Create an account

What Was the Industrial Revolution?

The Industrial Revolution was exactly what it sounds like: a revolution in industry and manufacturing. But it was also so much more because it had a profound impact on society as a whole. Let's explore this pivotal time in modern history.

Samuel Slater (1768-1835) was an Englishman who mastered textile machine operation and illegally brought that technology to the United States. See, during this time, Great Britain had extremely advanced textile-producing machinery and naturally wanted to maintain a monopoly on this type of technology. There were, therefore, British laws against importing textile machinery. Young Slater memorized the designs for cotton-spinning machines and reproduced them in the United States with wild success. For this, he is remembered in the U.S. as the 'Father of the American Industrial Revolution' and in Great Britain as 'Slater the Traitor.' Pretty funny. 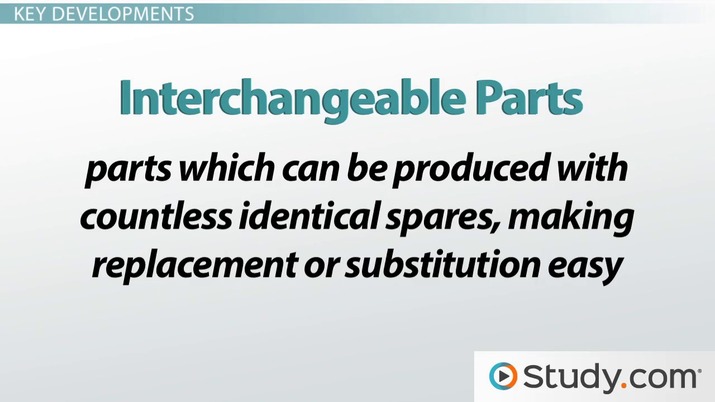 The Industrial Revolution was wide-ranging. It affected numerous areas, but its impact was especially felt in the areas of iron production, machine tools, textiles, and steam power. Let's look at these areas in more detail.

Throughout the late 18th century, blacksmiths discovered various processes for producing higher quality and more affordable iron. Improvements in blast furnaces and the use of better quality fuels, like coke, greatly enhanced iron production. In the 1780s, Englishman Henry Cort developed the processes of rolling and puddling. Rolling allowed wrought iron to be thinned out in a much more efficient manner than hammering it into sheets. Puddling was a bit more complex, but basically, it was an improved process for decarburizing pig iron and producing quality bar iron. Improvements in steel production also took place during this time, though steel tended to be more expensive.

The availability of high quality iron and steel launched a revolution in machine tools on both sides of the Atlantic. The demand for nails, screws, and other metal parts resulted in important advances in metal-cutting machinery. By the early 19th century, a number of different models of milling machines had been developed. Milling machines are simply machines used to cut metal or shave off metal until it reaches the desired design. With the introduction of milling machines, metal could be shaped to precise dimensions.

Eli Whitney (1765-1825) first used the interchangeable parts system to mass produce rifles in first few years of the 19th century. There is a degree of debate over whether or not Eli Whitney was the first to actually 'invent' interchangeable parts; at the very least, he was the leading pioneer in the United States. Whitney was a prolific inventor. His other contributions include the invention of the cotton gin and improvements to the milling machine.

Textiles experienced a major boom throughout the second half of the 18th century as spinning machines became increasingly complex. Instead of clothing being spun in the home, it was increasingly mass produced in factories. The 'spinning jenny,' invented in 1764 by Englishman James Hargreaves, was an important development within the textiles industry.

Of course, we already mentioned Samuel Slater and his 'traitorous' activity of replicating English-style textile machines in the United States. In time, Lowell, Massachusetts emerged as a leading center of textile production. If you have the time, look up 'Lowell factory girls' to learn about the culture surrounding the women who worked in the Lowell factories.

In the beginning of the Industrial Revolution, power was commonly supplied to mills and factories by wind and water, but throughout the early to mid-19th century, steam power became an increasingly important source of energy. During the 1770s and 1780s, Scotsman James Watt perfected the steam engine, thus paving the way for its eventual use in powering locomotives and steamboats. A leading pioneer of steamboat technology was Robert Fulton. Fulton is often credited with inventing the steamboat, but this is not entirely true; he was more one of many leading pioneers.

If you haven't caught on by now, it's worth mentioning that sometimes Industrial Revolution 'inventions' were actually not invented by the person you've always been told. In many cases, inventions and innovations were pioneered by numerous different people simultaneously.

The Industrial Revolution in Europe and the U.S.: Events & Innovations
Related Study Materials

Inventions in the Textile Industry

Industrialization Spreads Around the World

Types of Ideologies Along The Political Spectrum

The British Textile Industry in the Industrial Revolution

Polyploidy Number & Types | What is Polyploidy?