The insanity defense is a type of defense where the person charged admits to the action accused, but pleads not guilty due to mental illness. Explore the pros and cons of this defense type through a set of famous case studies. Updated: 10/13/2021
Create an account

What Is the Insanity Defense?

You may either recall or have at least read about President Reagan getting shot back in the 1980s. The man who attempted the assassination tried to assert the insanity defense when he was on trial for the crime.

The insanity defense is a defense where the individual who is charged with a crime admits that they committed a crime, but claim that they are not responsible for the crime due to mental illness; in other words, they are not guilty by reason of insanity. 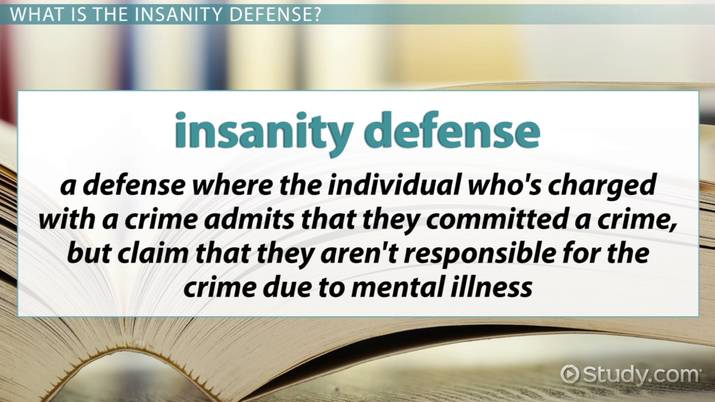 Try it now
Back
Coming up next: Acquiescence in Law: Definition & Concept

The initial case establishing the legal insanity test is commonly referred to is the M'Naghten Case from 1843. In this case, the British Prime Minister was shot and killed. The shooter claimed that he believed that the Prime Minister was in a conspiracy against him and he was defending himself. The court decided to acquit, or dismiss, the charges against the shooter, by reason of insanity. However, the shooter was then sent to a mental institution for the rest of his life. The standard created by this case, which was that there was a presumption of sanity unless one could show a defect of the mind which resulted in one's inability to comprehend the nature of the act as wrong, became the standard in the United States.

Let's return to our earlier example that opened this lesson. This was a famous case that utilized the insanity defense. It was the case involving the assassination attempt of former President Ronald Reagan. The shooter in that case, John Hinckley, apparently believed that he was part of the film Taxi Driver. He believed that President Reagan was part of the movie and that Hinckley, as the main character, had to stalk the President and engage in a shoot out with him. Hinckley then did just that, shooting then President Reagan several times. When on trial, Hinckley's attorneys used the insanity defense to defend Hinckley's actions, also citing his fixation with Jody Foster, one of the actors in the film. Moreover, the Hinckley's defense attorneys demonstrated that Hinckley had had schizophrenia for years and submitted documentation of the disease. Hinckley was successful in the use of the insanity defense.

Opponents to the insanity defense claim that there is no real way to measure one's 'sanity' and therefore, the defense is confusing and should not be permitted. Moreover, some say the insanity defense is difficult to use because of differing legal and medical standards; in other words, many different psychological experts have different professional opinions on what constitutes 'insanity,' at least to the point where the defendant isn't responsible for his or her own actions. In addition, some opponents say the defense is misused, with individuals 'faking' insanity to try and 'beat the system.'

The insanity defense has long since been used in the U.S. criminal justice system ever since the precedent was set by the M'Naghten case in Britain. The defense allows someone who cannot understand their actions to be acquitted of the crime with which they are charged and instead of serving prison time, go to a mental institution for treatment. Remember that acquit means to dismiss.

Psychological Evaluations & the Law: Competency to Stand Trial and the Insanity Defense

Larceny Types & Examples | What is Larceny?

Psychological Evaluations & the Law: Competency to Stand Trial and the Insanity Defense

Larceny Types & Examples | What is Larceny?