The invention of writing was and is important for human civilization and history. Discover how writing emerged and the advantages of writing, while taking into consideration the story of Grog's lost discovery. Updated: 10/24/2021
Create an account

Grog is a genius.

He has found that by adding tin to copper he can make a metal that is stronger than either. Through experimentation, he has found that the appropriate copper to tin ratio is 9:1. Grog teaches his apprentices this ratio in the form of a poem to help them remember it:

Sadly, Grog is better with metal than with words. One day Grog dies. His apprentices are not geniuses. They don't know why Grog's recipe works. They simply obey the formula they were given... at least as they remember it. Already, they can't agree if it was one part tin and nine parts copper or nine parts tin and one part copper.

Within two generations, the recipe is lost; there is no one alive who remembers how to make bronze, and Grog's culture must wait for another genius to re-invent bronze and hope that he comes up with a better poem. That is, essentially, the story of human civilization up until about 3,000 B.C. 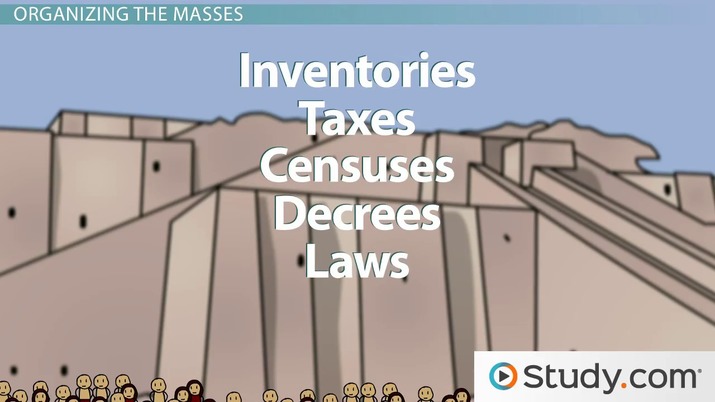 Try it now
Back
Coming up next: The History of Money and Rise of Complex Economies

Who knows how many times we've discovered fire or invented the wheel or identified a toxic plant only to lose the advances that we made? Then, somewhere in the fertile valley between the Tigris and the Euphrates, a clever person came up with the idea of representing words with pictures. To record these symbols, they took a stick and drew pictures in wet clay. Once their clay dried and hardened, their symbols were preserved so long as the clay was kept dry.

The symbols, called pictographs, were the first written language, called Cuneiform, named after the cone-shaped stick or stylus that they used to poke the clay. It is no coincidence that the first traces of writing share a location with the first traces of cities. Cities are impossible to administrate without some sort of writing. It is impossible to orchestrate the activities of thousands of people simply by word of mouth. Cities generate huge amounts of records: inventories, taxes, censuses, decrees and laws.

Thus, of all the inventions of humanity, the most important to our development was the invention of writing. Writing makes all our other inventions possible... how?

Well, let's look at what writing does. The main thing that writing does is it allows people to communicate ideas across space and time. You can learn something from someone you've never met, whether they're far away or long-dead.

This has two major advantages:

First, writing increases social memory, allowing a society to retain the progress it has made - Instead of having to reinvent bronze when the guy dies without having an apprentice, that information is written down and can be referred to by generation after generation of metallurgists.

Secondly, writing reduces the corruption of ideas by oral transmission - oral cultures must depend on what are called mnemonic devices to convey important ideas. This could be poetry, parables or any such thing. We still use this sort of thing to convey conventional wisdom today. 'An apple a day keeps the doctor away' or 'Beer before liquor, never been sicker.' Yet these things can fall apart easily. Think about a game of telephone; by the time the message has passed from one person to another, it's already changed. The more people in the chain, the more messed up it becomes. This isn't a problem if you're just playing a game, but imagine if you're trying to convey something very important like 'this plant, though delicious, is poisonous.' The slightest error in the chain of communication could mean disaster.

As we can see, with writing you can accomplish a great deal. You can retain what you've learned, and you can build upon the discoveries of others. Moreover, with writing, you can organize human activity on a much grander scale than you can by word of mouth.

You can see how these advantages played out in history. As we shall see, civilizations that had writing were able to subjugate those who did not. Moreover, even when overthrown themselves, civilizations with writing lived on to influence successors through their culture, technology and accumulated wisdom.

The Relationship Between Elements & Principles in Art

Ancient Aryans Religion & Civilization | Who were the Aryans?

The Relationship Between Elements & Principles in Art

Ancient Aryans Religion & Civilization | Who were the Aryans?