Copyright
Lesson Transcript
Instructor: Daniel Vermilya
The Iran-Iraq War showed the Middle East's tense and unpredictable political climate. Learn about the causes of the war through a timeline, explore how the stage was set for conflict and bloodshed, and understand the consequences it left in its wake. Updated: 10/21/2021
Create an account

One would be hard pressed to find a region in the world today where conflict is as prevalent as the Middle East. Seemingly every day, Americans are greeted with news reports of rocket attacks, terrorist threats, and instability in this part of the world. Yet, this is nothing new; Arab states have been warring with each other for centuries. One of the most volatile, bloody, and recent of these conflicts was the Iran-Iraq War of the 1980s. This war set the stage for many of the current problems in the Middle East, so let's learn a little bit more about it. 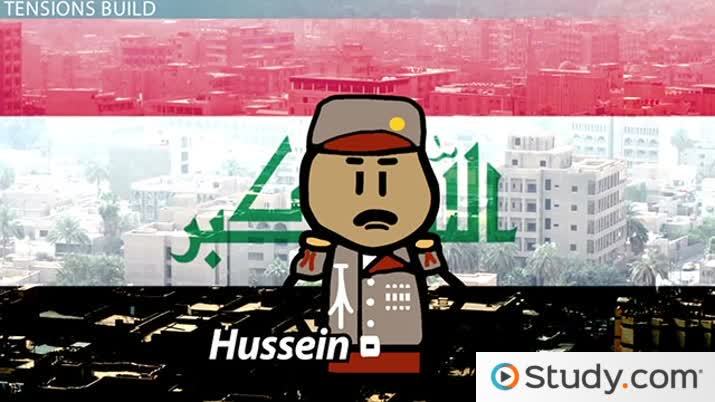 Coming up next: Causes, Events & Political Figures of the Gulf War

With a history dating back to ancient and Biblical times, the Middle East has a long tradition of conflict. The seeds for the Iran-Iraq War were laid years before the first shots were fired. Iran saw major regime changes prior to the war. For several decades, Iran had a pro-Western government. Radical factions within Iran were angered by this, and in 1979, the Iranian Revolution overthrew the government and began the new Islamic Republic.

Iraq had a similar story before the war. In the late 1960s, a coup d'état, or a seizure of power, occurred when the Ba'ath Party took control. The Ba'ath Party was a regional branch of a larger political movement sweeping the Middle East that was socialist in nature and had a strong nationalist appeal. By July 1979, General Saddam Hussein, a leading Ba'athist figure, was the Iraqi president. Thus, in 1979, both Iraq and Iran saw major leadership changes that ultimately opened the door for years of conflict to come between the two countries.

Tensions between the two countries built rapidly following the Iranian Revolution when the country's new leader, Ayatollah Ruhollah Khomeini, declared that Iraq needed to stage another coup and overthrow the ruling Ba'ath party. This threatened Hussein and the Ba'athists, who saw the new Iranian government as a threat to Iraq. Numerous border disputes intensified these disagreements.

Saddam Hussein had large aspirations as Iraq's leader. He wanted to expand his country's power, prestige, and influence, hoping to become the leading nation in the Middle East. One way of accomplishing many of his goals was to attack Iran, gaining new oil fields, more land and power, and dealing a blow to the threatening regime.

In the months leading up to the outbreak of war, Saddam began strengthening and mobilizing his massive military forces. Iraq had nearly 200,000 soldiers, with thousands of tanks and hundreds of aircraft. Conversely, the Iranian army had just undergone severe officer purges and executions. But Iran still had a strong air force, meaning that any war against them would not be easy. In September 1980, Iraq launched attacks on Iran and the fighting began in earnest.

By late September 1980, Iraq began a massive invasion of Iran along the country's southwestern border with Iraq. Because of the mountainous terrain, much of the early attacking was done by air strikes on Iranian air fields. When ground forces went into Iran, they encountered various military and police groups that were all fighting without any overall coordination. Soon, Iran began launching air assaults against Iraq, specifically targeting Baghdad, the Iraqi capital.

The Iranian Navy got involved as well, attacking oil terminals at Basra. Over the coming weeks and months, several major battles were fought, including the fight at Khorramshahr. By November, the Iraqi advance had stalled, and the fighting turned slowly from one of movements to stagnation. At that point, fighting was more in the style of World War One trench warfare, with tanks and defensive tactics being utilized by both sides.

Over the coming years, this was the pattern of the war. Air strikes, bombings, and trench warfare attacks were used. Iran focused on sending assaults of infantry soldiers to attempt to overwhelm specific parts of the Iraq lines. Iraq soon was pulling back from some of its key conquests in Iran because of massive losses, although Iranian forces were suffering heavily as well. Eventually, Iran launched an offensive into Iraq to force Iraqis out of Iranian soil, and the war intensified even further. By 1984, Iraq had lost an estimated 150,000 soldiers, while Iran had lost twice that many.

This pattern of attacks back and forth by each side continued for several more years. Thousands of civilians were caught up in the struggle and lost their lives during the war. In 1988, Hussein threatened Iran with the use of weapons of mass destruction. Iraq was using chemical bombs on Kurdish villages in Iran, killing thousands of innocents. With such atrocities quickly amounting, the Iranian leader, Ayatollah Khomeini, chose to accept a UN ceasefire agreement. The war soon came to an end.

Consequences of the War

So, what was the result of these eight years of war? Estimates of the casualties on each side are not firm and are at best just guesses. Iraq lost anywhere from 100,000 to 200,000 killed, with over 400,000 wounded and 70,000 taken prisoner. Iran likely lost over 200,000 killed, many of whom were civilians killed by Iraqi bombs and chemical weapons.

Representatives from each country convened to discuss peace terms in Geneva, but the discussions did not go well. Iraq refused to withdraw from Iran until the Iranians acknowledged Iraq's holding of the Shatt al-Arab waterway, one of the key disputes that had led to war in the first place. The fighting was over, but the disputes continued. Thousands of prisoners of war would be held for years to come.

The Iran-Iraq War was a long and bloody struggle from 1980 to 1988 that cost hundreds of thousands of lives. It occurred as a result of major political changes in the region. Each side used tanks, air power, and ground assaults to batter the other, with neither ultimately achieving its full goals for the conflict.

Many today believe that the war was a stalemate, as neither side could claim a full victory. Ultimately, the Iraq-Iran War cost the lives of hundreds of thousands and left the Middle East as an even more volatile region than ever before. Iraq and Iran would continue on their paths towards further instability, and the region would see much more conflict in the years to come.

Understanding the Yom Kippur War of 1973

The Iraq War | Timeline, Cause & Controversy

Korean War Causes, Timeline & Effects | When was the Korean War?

Suez Canal Crisis & Timeline | What was the Suez Crisis?

Causes & Conflicts of the Indo-Pakistani Wars

When Did Israel Become a Nation? | Creation, Formation & Establishment of the Nation of Israel