Italy was the birthplace of the Renaissance, a historical period in which people had a renewed interest in education, art, and philosophy of ancient Greeks and Romans. Learn about many of the reasons why the Renaissance began in Italy such as its location, and the transformation of the country driven by its wealthy merchant class in the 14th century. Updated: 10/22/2021
Create an account

Italy: Birthplace of the Renaissance

In today's lesson, we will be discussing Italy as the birthplace of the Renaissance, a historical period beginning in the late fourteenth century in which people started taking an interest in the learnings of earlier times, specifically in the cultures of Ancient Greece and Rome. As the French word 'Renaissance' implies, it was a rebirth in the appreciation and study of these classical times. It was also a rebirth in the interest of the individual and the human capacity to learn, otherwise known as humanism.

For our purposes we're going to stick with, and sort of stretch a bit, the idea of the Renaissance as a rebirth. This being said, we all know that every birth needs a mom, so for this lesson, Italy will play the role of Mamma Renaissance. The great Italian city-states of Florence, Venice, Milan, and the Papal states centered in Rome will play the roles of her very wealthy, intelligent, yet rather cantankerous children. Before we get to her offspring, let's first discuss the other reasons why Italy was the perfect mom for the Renaissance. 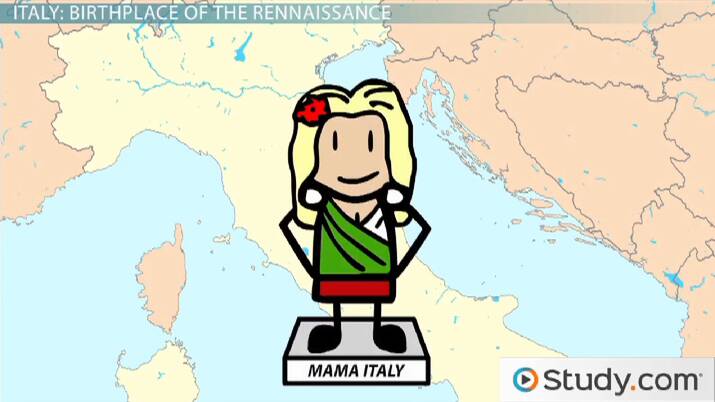 Coming up next: Humanism in the Renaissance: Recognizing the Beauty of the Individual

Why the Renaissance Began in Italy

Reason number one is quite simply her location. Italy is located directly in the middle of Eastern and Western Europe, making it very easy for her, through trade, to spread her new ideas all over the continent. Overseas trade, spurred on by the Crusades, had brought great wealth to Italy. Also, and even more obvious, Italy is actually the home to ancient Rome and many of the Greek beliefs that Rome held. Every day, Mamma Italy was able to draw inspiration from the ruins of Rome that surrounded her.

In many ways, it's as if maybe she woke up one morning and said 'Enough is enough! Why in the world am I obeying the ideas of those Northerners, those Dark Age Neanderthals, just telling me to suffer through life and wait for some eternal reward? Well, I've had enough of this. I want to live now - I want to live like my ancestors did in the ancient glorious Roman Empire!'

This very idea was trumpeted, albeit much more eloquently, in the writings of Petrarch, a citizen of Mamma Italy who has come to be known as the Father of Humanism. He too desired to trade in the stuffiness of old medieval ideals for the beautiful, human-oriented works of Ancient Rome, specifically those of Cicero and Virgil.

Reason number two for Italy being the perfect Renaissance mom was her wealthy merchant class. Unlike most of Europe, feudalism, or the idea of wealth through land ownership, never gained a firm hold in Italy. Because of this, Italy, specifically northern Italy, was urban, while the rest of Europe was mostly rural. Fortune was not to be made in Italy through land ownership but instead through commerce and trade. This gave rise to a wealthy merchant class.

The Bubonic plague struck Italy in the 1300s, decimating over 60% of her population. This brought more wealth to the common class. Simply put, because there were fewer laborers, the surviving workers could demand more money. Furthermore, this decimation of the population made it more difficult for the uber-wealthy merchant class to expand their businesses. This freed their money up to be spent on more interesting things, like the arts, architecture, and literature. A perfect example of this is the wealthy Medici family of Florence, a banking family who financially backed many Renaissance artists, the greatest of these being Michelangelo himself.

And now we come to reason number three, our final reason for the success of Italy as the mother of the Renaissance: her four city-state children. Again, they are Florence, who grew powerful due to the trade of wool; Venice, who gained power through trade at sea; Milan, who had a strong monarchy and was ruled by a powerful line of dukes; and the Papal states, funded by the Church centered in Rome.

Here it should probably be mentioned that Italy had a very different parenting style than that of the other European countries. Unlike them, she did not rule over her household with an iron fist. She did not unite her children under one kingdom or one supreme head. Instead, her kids were much more independent, each forming their own sovereign city-states, making their own decisions, and having their own forms of government.

Now, as I mentioned earlier, these four children, like any other children who are given a bit too much freedom, had the nasty habit of fighting and causing some real trouble. The beginning period of the Italian Renaissance was marked with warfare between not just the four wealthiest siblings but also the smaller, unmentioned city-states.

Ironically, most of these wars were not fought by the actual citizens of Italy but were instead fought by mercenaries, or condottieri as they were called back then. No matter their name, they were soldiers for hire drawn from the northern countries of Europe, specifically Germany and Switzerland, to do the dirty work of the squabbling siblings. As you can probably guess, the city-states with the most money who could hire the most soldiers - therefore the four wealthiest siblings, Flo, Vinny, Millie, and Roma - quickly absorbed the smaller ones into their folds.

After decades of fighting on land, Florence, Milan, and Venice emerged as the most dominant players. At sea, there were also many battles with the weaker siblings of Pisa and even Genoa. Again, in this contest, the wealthier Venice reigned supreme, giving her hegemony, or a fancy word for domination and absolute rule, over the Italian seas.

As the power of these northern city-states continued to grow, the Papal states of Rome were also growing and changing. The Pope, who held the responsibility of the Catholic Church, also ruled Rome. However, as the wealth of the city-states increased, the Pope became more of a politician than a spiritual leader. Corruption infiltrated the Church, and, as often happens, money followed the corruption, giving Rome her place as one of the wealthy siblings of Mamma Italy.

As these four siblings matured in power and wealth, they finally decided to play nice, setting aside their differences with the Peace of Lodi in 1454. With this truce, a period of peace reigned over these cities. Without the need to spend money on war, the siblings decided to grow up a bit, turning their attention to the culture of the arts, ancient Latin, architecture, and the humanistic ideals. Because of this, we have been given the beauty of Michelangelo, the wisdom of Leonardo, and the architecture of Brunelleschi.

To summarize, Italy was the birthplace of the Renaissance, a historical period beginning in the late fourteenth century in which people again started taking interest in the learning of the earlier times during Greece and Rome. As the French word 'Renaissance' implies, it was a rebirth of these ideals.

There are three main reasons why Italy was the perfect place for the birth of the Renaissance. Reason number one was simply her location. Reason number two, as we discussed, was her wealthy merchant class. And finally, reason number three: because of her wealthy merchant class, she also had four wealthy and powerful children - the great Italian city-states of Florence, Venice, Milan, and the Papal states centered in Rome. All of these reasons made Italy the perfect mom of the Renaissance, enabling her to not only spread her ideals past her boundaries to Northern Europe but also to history and to our modern world. For this, we owe Mamma Italy our thanks and our gratitude!

Mongol Empire History, Expansion & Army | Who were the Mongols?