In this lesson, we will summarize the short story 'The Jewelry' by Guy De Maupassant. Furthermore, we will examine the theme that things are not always as they seem. Then you can test your knowledge with a quiz!
Create an account

Characters of The Jewelry

Have you ever thought you knew someone and then found out years later they were not what they seemed? The Jewelry, a short story written by Guy de Maupassant explores this notion. In this story, M. Lantin, the chief clerk for the office of the Minister of Interior, meets the girl of his dreams and marries her. Years later, he learns that the minor irritations that always bothered him about his wife were a signal that she had a big secret. Let's find out more about this short story. 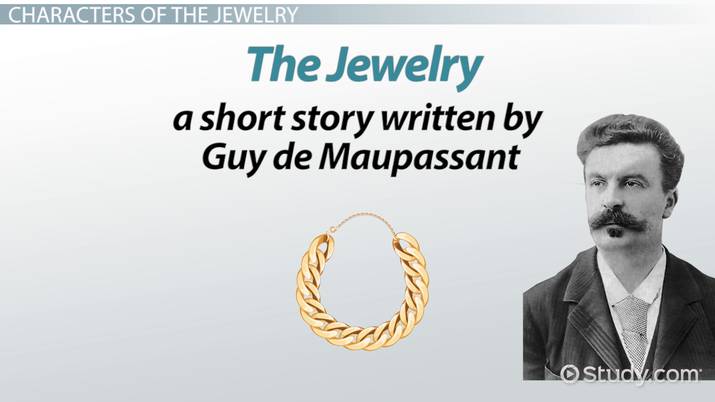 Coming up next: My Uncle Jules: Summary & Analysis

Plot Summary of The Jewelry

When a beautiful, modest, and respectable young lady moves to Paris with her mother in hopes of getting married, M. Lantin immediately recognizes her as a great catch and marries her. They live together happily for many years. He admires her loving playfulness, and how adept she is with the family's economics.

The only things about her that he finds irritating are her love for the theater and the gaudy fake jewelry she wears. Eventually, he's able to convince her to go to the theater with friends so that he doesn't have to endure it. However, he can't convince her to stop wearing the jewelry even though he tells her, 'My dear, when one has not the means to afford real jewelry, one should appear adorned with one's natural beauty and grace only--and these gifts are the rarest of jewels.' She begs him to tolerate this one idiosyncrasy.

One night after the Opera, she gets pneumonia and dies eight days later. Lantin is beside himself with grief. To make things worse, he does not seem to be able to stretch the household budget as his wife did and finds himself in debt. He decides to sell off some of her fake jewelry, hoping he can get about 8 francs for a necklace. He is surprised to learn that it is worth about 15,000 francs. Immediately, the shopkeeper assumes he has stolen it and Lantin assumes his wife has been having an affair.

Lantin brings the rest of his wife's jewelry to the store and makes a total of about 200,000 francs. The first thing Lantin does is resign from his position, telling his supervisor that he has inherited 300,000 francs. After celebrating with a fine meal, he tells a man at the restaurant he has inherited 400,000 francs. That night he enjoys the theater for the first time. Six months later, he marries an uptight, angry woman who makes his life miserable.

Themes and Analysis of The Jewelry

One of the themes of this story is that things are not always as they seem. Lantin believes that his wife is as in love with him as he is with her, but she's evidently not as satisfied with their marriage. In the second marriage where Lantin is unhappy, it leaves the reader wondering if his second wife realizes how he feels. Perhaps the reason why Lantin is less happy with his second wife is that he no longer keeps his eyes half closed as he did in his first marriage.

This theme is further supported as once Lantin receives his inheritance, he begins to live a lie, just as his first wife did. Lantin keeps increasing the amount that he claims to have received and starts enjoying, or at least pretending to enjoy, things that once bored him. Perhaps this experience changes him to the point that he's no longer able to be authentic in a relationship. Maybe we're happier when we're in the dark.

Let's review. The Jewelry is a short story written by Guy de Maupassant that explores notions of how well we really know each other. Its main character is M. Lantin, the chief clerk for the office of the Minister of Interior, and he thinks he is a lucky man when he meets a modest and beautiful wife that seems to adore him and does a fine job taking care of the household finances. But even though he loves her and is happy, he doesn't like going to the theater and hates the fake jewelry she wears.

When she dies of pneumonia, he is distraught and unable to make ends meet. He tries to sell some of her fake jewelry but discovers it is real. He brings in close to 200,000 francs for it. However, he is upset when he realizes that she must have acquired it through an affair. He quits his job and brags that the inheritance is double its actual amount. Lantin begins to enjoy things like theater, but when he remarries, he is miserable. The themes are that things aren't always as they seem and that perhaps we're happiest when we're ignorant of the truth.

The Lady with the Dog: Theme & Analysis