This lesson will explore the ancient religion of Judaism, the faith of the Jewish people. In doing so, it will highlight the concept of monotheism, Yahweh's covenant with Abraham and the Jewish texts of law. Updated: 08/29/2021
Create an account

Today's lesson will be a brief exploration of Judaism, one of the world's oldest religions. It is a faith system that has survived throughout the centuries—a belief structure that has shaped, and continues to shape, cultures around the globe.

For starters, Judaism is the ancient faith of the Jewish people and still has millions upon millions of followers throughout the world over. As a faith system, it sets itself apart from most ancient religions in that it is monotheistic, or believes in only one God.

There are four different denominations of Judaism, including Reform, Conservative, Orthodox, and Reconstructionist, which all have the same foundational beliefs but have some differing traditions and rules. 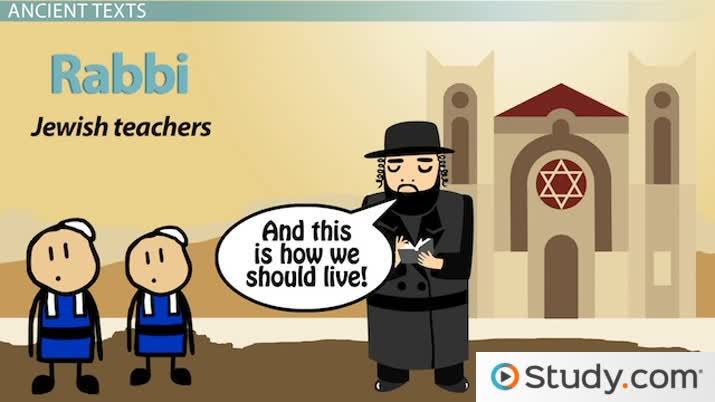 Coming up next: Christian Antisemitism in Medieval Europe

With its origins in the ancient cultures of Israel and Palestine, Judaism has its roots in the belief that God made a covenant with the man known to history as Abraham, the father of Judaism. This covenant was a promise that God would give Abraham's descendants the lands of Canaan, today parts of Israel and Palestine. It is this promise that has taken, and definitely still takes, center stage in the politics of the Middle East.

Adding to this land grant of sorts, the Jewish God, is believed to be a loving God who chose the Jewish people as his very own. This idea is found scattered throughout the pages of Judaism's ancient texts. For example, the Torah, or the Jewish law, reads:

''Not because you are more numerous than any people did the Lord delight in you and choose you, for you are the least of all the peoples. But because of the Lord's love for you, and because He keeps the oath He swore to your forefathers, the Lord took you out with a strong hand and redeemed you.''

Adding to these passages from the Torah and its monotheistic beliefs, Judaism also holds to the teachings of the Talmud, the body of Jewish civil and ceremonial law. Written by ancient Jewish teachers, or rabbis, the Talmud deals with topics ranging from history to customs to ethics.

As a religion, Judaism continues to be heavily ritualistic. It revolves around the many laws of the Talmud, and the famous Ten Commandments, a set of principles relating to behavior and worship. Just like in ancient times, fundamental Jews of today still hold these laws as sacred.

With this, ancient Jews (and today's fundamental Jews) believed that the punishment for sin can be alleviated through things like prayer, cleansing rituals and sacrifice.

As one of the world's oldest religions, Judaism is the faith of the Jewish people. Being monotheistic, it believes in one true God. As a faith system, Judaism asserts that God made a covenant with Abraham, the father of Judaism.

Adding to this, it also contends that God gave the land of Canaan, parts of modern day Palestine and Israel, to Abraham's descendants. It also teaches that God chose the Jewish people as his very own. With these beliefs, Judaism also holds to the ancient laws of the Torah, the Talmud and the Ten Commandments of the Bible.

Villages to Cities: How Cities Were Invented

What Is the Silk Road? - Goods & Ideas Crossing China