The Four Phases of Matter

Solids, liquids, gases, and plasmas: these words should be quite familiar to you because they are the four phases of matter, which are simply the different forms matter can take on. What's neat is that many substances can exist as more than one phase. Take water, for example: water can exist as a solid (ice), a liquid (liquid water), and a gas (water vapor).

The difference between these states is the amount of energy. Solids have the least amount of energy, which is part of why their particles hang so tightly together. Liquids have more energy than solids, which is why they will take on the shape of their container but only up to the surface.

Gases have even more energy than liquids. So much more in fact that their particles spread out to fill the entire space of their container. Gas particles have so much energy that they just can't keep still. They fly around in all directions, putting as much distance as possible between themselves and the rest of the gas particles.

Plasmas are ionized gases, and in their natural form are uncommon on Earth. You've seen them as man-made things, like neon signs and fluorescent light bulbs. But in the rest of the universe, plasma is actually the most common phase of matter! Most stars are plasma, as are the northern lights you see around the Polar Regions. Plasma only exists under certain conditions though, so we'll end our discussion of it here for this lesson. 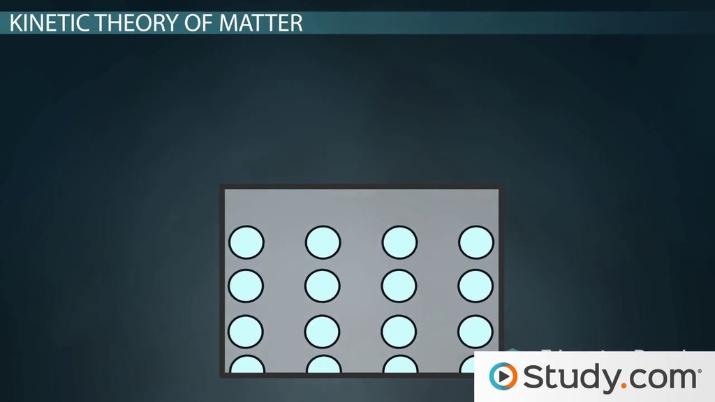 Coming up next: What is Electric Energy? - Definition, Sources & Examples

The kinetic theory of matter states that all matter is made of small particles that are in random motion and that have space between them. This means that no matter what phase matter is in, it is made of separate, moving particles.

This theory sounds pretty simple, but it actually explains a lot about the physical properties of matter and how it behaves. You might be surprised to learn that the particles of a solid are actually moving, just not enough for you to see. This type of vibrational movement is why a solid won't change shape no matter what kind of container you put it in.

Remember how liquid particles have more energy than solids? The extra energy in this state allows the particles to move around more freely, and they spread out more than those of a solid, putting more space between those particles. This is why a liquid will take the shape of its container up to its surface.

And since gases have even more energy than liquids, their particles are moving around a lot more, too. This is why a gas will expand to fill its entire container, not just to its surface like a liquid. Not only do the particles of a solid not move very much, but they're also held very close to each other by strong attractive forces. These forces are what hold the particles in place and are what give a solid its fixed size and shape.

The kinetic theory of matter is also useful for explaining why substances can change phase under certain conditions. You know that water can be solid, liquid, or gas, but how does this happen? A phase change occurs when energy is added to or taken away from matter, usually in the form of heat.

When you heat an ice cube, it melts, turning into liquid water, right? This happens because the particles of the ice cube are heated, meaning they have more energy. Just like when you get energized after eating a cookie and start bouncing around, particles that have more energy also move around more. When they have enough energy, they change phase from solid to liquid.

The same is true for liquid particles that are heated. When you heat a pot of water on the stove, you eventually heat the water enough so that it starts boiling. When liquid water reaches its boiling point, it turns to water vapor, which is water in the gaseous phase. The particles have so much energy that they have undergone a phase change - this time from liquid to gas.

We can also create a phase change in the opposite direction by removing heat and therefore removing energy. When you freeze water, it turns to ice because you have removed heat from the water. The particles slow down and turn solid because they don't have enough energy to move around like a liquid anymore. This is also why water collects on the outside of your glass on a hot day. The water vapor in the air cools as it hits your glass of lemonade, so the water particles slow down and change from gas to liquid.

The kinetic theory of matter tells us a lot about different phases of matter. This theory states that all matter is made of small particles that are in random motion and that have space between them.

Though this theory describes all matter, not all matter is the same. The different phases of matter exist because of differences in the motion of and space between those particles. In solids, the particles have very little motion and are held together very tightly, with little space between them.

Matter can change from one phase to another when the amount of particle energy is changed. If enough energy is added to a solid, it can change to liquid, and adding even more energy will change that liquid into gas. But even though matter can change phase by adding or removing heat, each type of matter requires different amounts of energy for these changes to occur.

The Structure of the Skin