In this lesson, we will examine the characters from Frank R. Stockton's 'The Lady, or the Tiger?' It is a fairytale about love, jealousy, and justice. Updated: 12/13/2019
Create an account

Imagine being faced with the choice of having your love eaten by a tiger in front of your eyes or having him marry a beautiful woman and watching them live happily together for the rest of your life. This is the question that the princess faces when her father arrests her lover. Let's examine the characters from 'The Lady, or the Tiger?' by Frank R. Stockton. 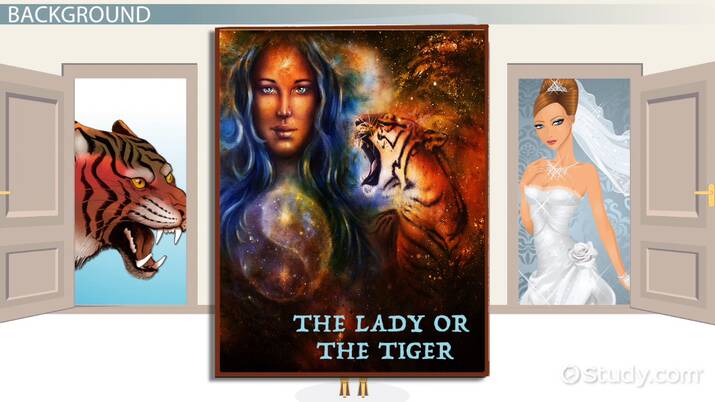 Coming up next: The Lady, or the Tiger? - Summary & Analysis

The king is a semi-barbaric ruler whose civilized side made him a 'bland and genial' problem-solver while his barbaric side resulted in 'exhibitions of manly and beastly valor.' To determine justice in all situations, he has men enter an arena where all of the citizens of the kingdom watch while the accused opens one of two doors. Behind one door is a man-eating tiger; behind the other door is a woman of the proper age that the man must immediately marry regardless of his current marital status. While most people would consider this unreasonable, the people of his kingdom enjoyed the entertainment.

The princess shares her father's semi-barbarism and is 'the apple of his eye.' The princess doesn't tell her father about her lover, as it's against protocol for anyone to love the princess. When her lover is arrested, the princess uses her position to find out which door the tiger is behind and who the lady is.

When the princess discovers which lady is behind the door, she is incredibly jealous. On the day of judgment, most women would not have been there, but because of 'the moiety of barbarism in her nature. . . her intense and fervid soul would not allow her to be absent on an occasion in which she was so terribly interested.' The princess signals to her lover which door to choose, but the story does not say if she led him to the tiger or the lady. The question remains whether the jealous and semi-barbaric princess would rather see her lover dead or with another woman.

The princess' lover is a man 'of that fineness of blood and lowness of station common to the conventional heroes of romance who love royal maidens.' The lover is handsome, brave, tall, and passionate about the princess. He recognizes as soon as he enters the arena that the princess knows which door he should choose. When she signals the door he should pick, he trusts her implicitly.

Let's review what we've learned. In 'The Lady, or the Tiger?,' the semi-barbaric king arrests his daughter the princess' lover, who was a man 'of that fineness of blood and lowness of station common to the conventional heroes of romance who love royal maidens', for attempting to love someone above his station. The lover is forced into an arena where he must open one of two doors. Behind one door is a tiger. Behind the other door is a lady that he would be forced to marry. The lady is a beautiful woman of whom the princess, the semi-barbaric king's semi-barbaric daughter, is jealous. The princess tells her lover which door to open, but it is left up to the reader to decide if her semi-barbaric jealousy led him to the arms of another woman or his death.

The Lady or the Tiger Characters
Related Study Materials

The Lady, or the Tiger? - Summary & Analysis

The Adventure of the Dying Detective Story Summary

The Most Dangerous Game by Richard Connell | Summary, Theme & Plot

The Cask of Amontillado: Setting & Tone

Suspense in The Most Dangerous Game

The Adventure of the Dying Detective Characters & Analysis

The Interlopers by Saki: Theme & Analysis