Latin isn't really spoken anymore, but it's still an incredibly important language. In this lesson we'll explore the history and development of this ancient language, and see how it impacted European history.
Create an account

While you may know Latin as one of the most influential languages of Western history, you probably also know that it's been called a dead language because nobody speaks it conversationally anymore. That moniker may not be entirely appropriate. Latin is more like a ghostly language. It's technically dead, but it still pops up every now and then to haunt us. For example, have you ever been asked to fill a quota, finished a list with et cetera or explained something vice versa? All of these commonly used idioms come from the Latin language.

However we define it, Latin played a major role in European history. It was, for a long time, the primary language of the Western world. It was one of the first great literary languages of Europe. It was spoken by millions, and influenced the rise of other written languages. It's a bona fide part of our past. 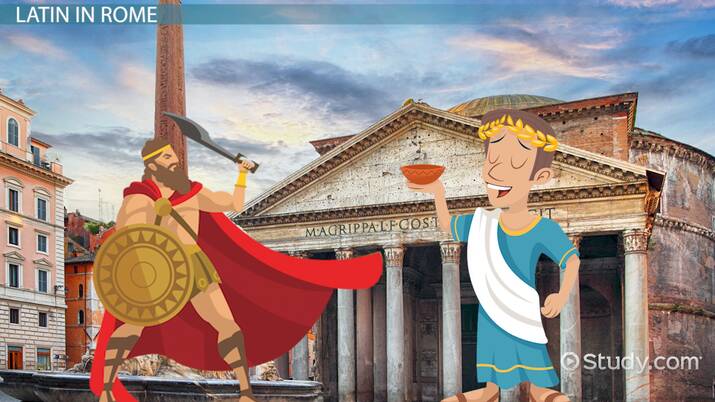 The Origins of Latin

While its exact origins are mysterious, the ancestral form of Latin seems to have been one of the oldest members of the Indo-European language family, a large category also including Greek, Celtic, and Germanic languages. Linguists theorize that the ancestors of Latin appeared in the Italian Peninsula around 1000 BCE, where it started to form into the oldest version of true Latin, known as Archaic Latin, somewhere along the Tiber River. The people who spoke Archaic Latin eventually built their own city in this same spot and called it Rome.

While Latin interacted with the Oscan, Umbrian, and Faliscan Italic languages of the peninsula, it was most influenced by a central Italian language of mysterious origin. Etruscan was one of the only non-Indo-European languages of Italy. In fact, Etruscan doesn't seem to be clearly related to any other known language. Its written form, however, was partly based on Greek and Phoenician models. Both the spoken and written forms of Etruscan greatly impacted Archaic Latin, and the Roman people developed a writing system for their language some time around the 7th century BCE.

Latin continued to develop as Rome itself grew. In 509 BCE, the Romans overthrew their king and established the Roman Republic. By this time, they were speaking and writing a pre-classical form of Latin. As the Romans developed their republic, they used this language to write out their histories, philosophies, and political treatises. Latin became more standardized as Rome developed a sophisticated intellectual culture.

Finally, around 100 BCE the Romans had codified their language into what we call Classical Latin. This was the language of intellectuals, poets, and philosophers, and it helped issue in the golden age of Latin literature. Lasting from the late Republic through the early years of the Roman Empire, this period featured the works of Rome's greatest literary masters, including Cicero, Virgil, Ovid, and Livy.

As the Roman Empire spread, Latin moved into Roman colonies. It became so widely spoken that it was the de facto language of the Western world. No matter where you went, you could find someone who spoke Latin. This made it easier for merchants, philosophers, generals, and rulers to interact, and even places outside of Roman control learned Latin so they could participate in mainstream Mediterranean economies and politics.

As Latin spread, it was also impacted by other languages, most notably the Celtic and Gaelic languages to which Roman soldiers were highly exposed. From the 2nd to 6th centuries, formal Latin was slowly molded into something infused with other idioms and vocabularies, known as Vulgar Latin.

In the 5th century, Rome officially fell. Without Roman control, there was no one left to maintain Latin as a standardized language. Vulgar Latin quickly evolved into the Romance languages of French, Spanish, and Italian, and impacted the development of new Germanic and Celtic languages.

This does not mean Latin was abandoned entirely. The Roman Catholic Church, based in Rome, maintained Latin as its language of scholarship and worship. The Church was the center of intellectual culture once Rome fell, and maintaining the language of Roman intellectuals communicated that.

Latin would see a resurgence in the Italian Renaissance, the period of rapid social, cultural, and scientific advancement from the 14th to 16th centuries, in which Italian painters, poets, and philosophers looked back to the examples of ancient Rome. They translated the Classical Latin masterpieces, expanded upon them, and built the largest intellectual culture Italy had seen in centuries. Latin was once again the language of scholars, and that tradition spread again throughout Europe. As the Renaissance ended, Latin was maintained by scientific and religious communities. Sir Isaac Newton wrote in Latin, as did Galileo. Sir Francis Bacon, Shakespeare, and Mozart were all educated in Latin, the primary language of schooling in Europe at that time.

By the 18th and 19th centuries, Latin was again diminishing in use and was eventually replaced by local languages. It's impact, however, remained evident. To this day, we recognize the Latin names of animals because the scientists who developed our taxonomic systems knew Latin. National mottos are in Latin because that was the language of political intellectualism. Many European languages sound similar because they're either descended from or were influenced by Latin. Latin may be considered dead, but its legacy is all around us.

Let's take a couple of moments to review what we've learned about the history of the Latin language. Latin was one of the most influential languages of Western history. Originally developed by the ancestors of the Roman people, this was an Indo-European language, which is a large category also including Greek, Celtic, and Germanic languages. Latin was also heavily influenced by the isolate Etruscan language of central Italy, with Etruscan being one of the only non-Indo-European languages of Italy. Finally, it was a language that was also largely influenced by the writing systems of the Greeks and Phoenicians.

By the late Roman Republic and early Roman Empire, the Romans were writing a highly standardized Classical Latin, the language of intellectuals, poets, and philosophers in a golden age of literature. As the empire expanded, Latin became the de facto language of the Mediterranean, and was also impacted by the languages it encountered. It developed into Vulgar Latin, or the language of the lower classes infused with other idioms and vocabularies, which in turn became the Romance languages.

Latin was maintained by the Catholic Church and other intellectual institutions and was the language in which many of our scientific foundations were first recorded, especially when Latin would see a resurgence in the Italian Renaissance, the period of rapid social, cultural, and scientific advancement from the 14th to 17th centuries. So, is it correct to say that Latin is dead per se? Or is it just the status quo? Either way, it's the de facto language of our past.

Romulus and Remus Facts & History | The Founding of Rome

Etymology: Study of Word Origins | What Does Etymology Mean?

The Political Structure of the Roman Republic