An orange has three protective layers. The first one is the thick and hard layer that gives the fruit its color. Beneath that is this white layer that resembles a spider's web as you pull the orange peel away. And the layer underneath that, the one that attaches directly to the pulp, is this very thin, semi-transparent, delicate membrane.

And, perhaps not too surprisingly, these layers remind me of the layers of the meninges, three fibrous membranes that enclose the central nervous system, which consists of the brain and spinal cord.

Let's see what they are called and why they remind me of an orange. 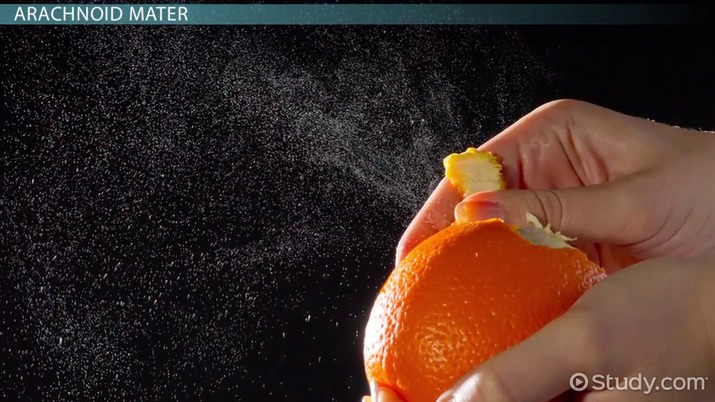 Coming up next: Cerebrospinal Fluid in the Brain: Functions & Production

Alright so, our orange has an orange peel. This is the thick and hard outermost layer that surrounds the fruity goodness inside.

What in the world, does this connective tissue have to do with your mother? Well, the interesting story goes like this. A man named Stephen of Antioch, an Italian translator of the 12th century, was translating the work of a 10th century Persian physician called Haly Abbas into Latin, the common language of the learned European men at that period in time.

At the time of Abbas's writing, Arabic medicine believed the meninges were the source of all of the membranes in the body and used real-world familial relationships like mother, son and so forth, to describe the relationships between different tissues. And as you'll soon learn, all the layers of the meninges end with the Latin for mother, mater.

Anyways, inside of the cranium, the portion of the skull holding the brain, the dura mater is split into two layers itself:

These two layers stick to one another in the cranium except when they are separated by structures called the dural venous sinuses (venous channels that allow for blood flow), ones that are similar to the epidural venous plexus of the vertebral (spinal) canal.

In the vertebral (aka spinal) canal, the cavity in the backbone where the spinal cord passes through, there is no periosteal layer to the dura mater, only the meningeal layer encloses the spinal cord. The vertebral canal (aka spinal canal, aka the spinal cavity) should not be confused with the epidural space, the space lying within the vertebral canal but outside the dura mater. An epidural (extradural) space is also possible between the cranial bones and the endocranium although this becomes less likely barring an underlying pathology as an individual gets older because the endocranium becomes superglued to the cranial bones with age.

Under normal conditions, there shouldn't be any space between the arachnoid mater and dura mater. However, when there is an underlying pathology something known as a subdural space may exist between the two. This can happen, for example, during trauma from something like a car accident.

Finally, when you've peeled the thick outer orange peel and web-like white stuff from the orange, you're left with this final thin and delicate membrane covering the orange's pulp (see the third orange in the image above).

This is like the pia mater, the very thin, delicate, vascular and innermost layer of the meninges. 'Pia' means 'delicate.' Its role is to provide oxygen and nutrients to the brain and spinal cord.

The cerebrospinal fluid (CSF) found in the subarachnoid space, ventricles of the brain and the central canal of the spinal cord serves to protect and cushion the brain and spinal cord. Another lesson goes into more detail about its function.

Now you're a pro at peeling and pulling apart oranges and the meninges!

The meninges are three fibrous membranes that enclose the central nervous system, which consists of the brain and spinal cord.

Watch the lesson on the layers of the meninges and then attempt to realize these objectives:

The Layers of the Meninges: Medical Vocabulary
Related Study Materials

Cranial Nerves: The Vagus Nerve and its Functionality

Regions of the Peritoneum: Medical Vocabulary

The Inner Ear: Sense of Balance and Hearing

Muscles of the Head and Neck: Anatomy, Motion & Support

What is a Neurotransmitter? - Definition, Types, Function & Examples