In this lesson, we will learn about the followers of John Wycliffe, the Lollards. We will learn who they were, what they believed, and how people reacted to them. We will identify the central tenets of their theological approach.
Create an account

Introduction: Who Were the Lollards?

The Lollards were a group of anti-clerical English Christians who lived between the late 1300s and the early 1500s. The Lollards were followers of John Wycliffe, the Oxford University theologian and Christian Reformer who translated the Bible into vernacular English. The Lollards had profound disagreements with the Catholic Church. They were critical of the Pope and the hierarchical structure of Church authority. The Lollards emphasized personal piety, humility, and simplicity in their relationship to God, rather than formality. The term 'Lollard' was a derogatory term given to the group by the established Church. The exact origin of the term remains uncertain, but it is believed by many etymologists to have come from the Dutch word 'lollaerd,' meaning 'mumbler.' By the mid-1400s, the word had essentially become synonymous with 'heretic.' 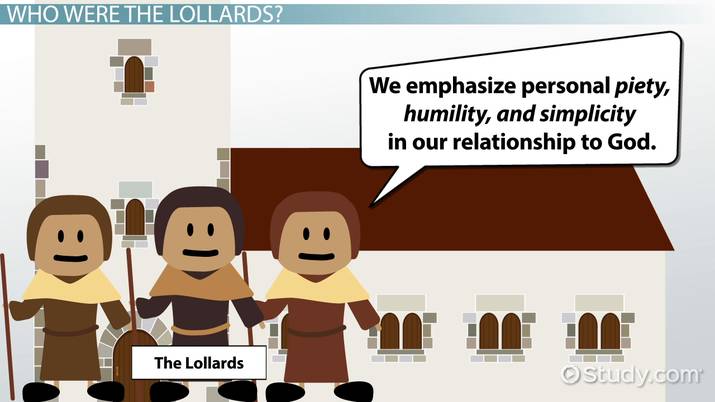 Coming up next: The Pope: History & Timeline

Who Was John Wycliffe?

We can't understand who the Lollards were without first looking at who John Wycliffe was. John Wycliffe, who was born some time in the 1320s and died in 1384, was an English Christian theologian who became popular for translating the Bible into vernacular (or common) English in 1382. During this time, the Bible was usually only available in Latin, which was the language used by the Church and those of the upper classes. Therefore, many regular men and women were not able to read the Bible for themselves. Wycliffe wanted to change that, and he did by translating the Latin Bible (the Vulgate) into the people's common language. As a professor of theology at Oxford University, Wycliffe challenged the Catholic Church on numerous points of doctrine. He felt the Church was too institutionalized and had become corrupt. He promoted a personal type of Christianity - one that emphasized piety, humility, and simplicity. He died of natural causes in 1384. After he had been dead for a number of years, the Church declared him a heretic and had his body dug up and burned.

At Oxford University, Wycliffe's radical views attracted many followers. Within a few years after Wycliffe's death, these followers picked up the derogatory nickname 'Lollards.' It should be noted that the origin of the term is not certain, and a number of views have been put forth. To the officials of the Catholic Church, Wycliffe's followers were nothing but 'mumbling fools.' After Wycliffe's death in 1384, the Lollard Movement exploded. In 1395, the Lollards petitioned Parliament by posting The Twelve Conclusions of the Lollards on the door of Westminster Hall. The document highlighted points of theological disagreement with the established Catholic Church. For example, the first 'Conclusion' dealt with greed; the Lollards felt Church officials were too concerned with their own economic status, and not devoted to true spirituality. Another 'Conclusion' addressed the theology behind the Eucharist, and attacked the doctrine of 'transubstantiation,' which is the view that during the Eucharist, the bread and wine at the Lord's Table actually turns into the literal, physical body and blood of Jesus Christ. The Twelve Conclusions became a sort of unofficial doctrinal guide for the Lollards.

The Lollard Movement had supporters at Oxford University and elsewhere. A group of wealthy men sympathetic to the Lollards even became known as the 'Lollard Knights.' Realizing the growing popularity of this new 'heresy,' the Church began to crack down on the Lollards by the early 1400s. In 1410, John Badby, a Lollard, was burned at the stake for refusing to recant. Another Lollard, Sir John Oldcastle, attempted and failed to kidnap King Henry V, and was also burned alive. Throughout the 1400s, Lollards were commonly thrown into prison, executed, or persecuted in other ways. The Lollard Movement was eventually absorbed into the Protestant Reformation, which Martin Luther helped ignite in 1517.

The Lollards were followers of John Wycliffe. They were an anti-clerical group of English Christians who lived between the late 1300s and early 1500s. The Lollards protested what they saw as corruption and excess in the Catholic Church. They rejected the Church's hierarchical system, and instead promoted a form of Christianity based on personal piety, humility, and simplicity. The term 'Lollard' was a derogatory term given to them by Church officials. The term is commonly believed to have been derived from a Dutch word meaning 'mumbler,' although no one is certain about it. The Lollards were persecuted throughout the 1400s. Their movement eventually became absorbed into Luther's Protestant Reformation.

The Renaissance Heresies of Wycliffe and Hus

Thomas Becket and the Constitutions of Clarendon

Poll Tax History, Significance & Abolition | What is a Poll Tax?