In a feudal system, vassals are subordinates who pledge their loyalty to powerful lords. Learn about the lord-vassal system during Japan's Kamakura period. Explore the Kamakura Shogunate, and review land and loyalty in the Kamakura Shogunate to understand feudalism in Japan, including the beginning of the Samurai class. Updated: 10/31/2021
Create an account

The Japanese warrior culture is pretty well-known to us. Most of us have heard of the samurai, elite warriors that lived by a code of honor. But where did these warriors come from? They were part of an intricate system of lords and subjects in a period of wars and loyalties.

The name for the beginning of this era was the Kamakura Shogunate, which lasted from 1192-1333. A shogunate is a system where a military leader, called the 'shogun', ruled Japan. Japan still had an emperor, but the shogun was so powerful that he was the real power and directed the politics of the empire. The shogun was the leader of a powerful family. The Kamakura Shogunate was dominated by the Minamoto clan, who based their capital in the city of Kamakura. 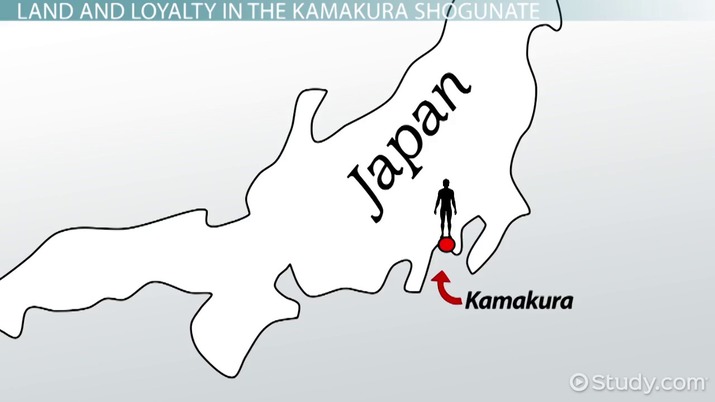 Land and Loyalty in the Kamakura Shogunate

When the Minamoto Shogun rose to prominence, he began reorganizing Japanese society. For the Minamoto to stay in power, they relied on a series of very loyal subjects called vassals. The vassals gave the shoguns soldiers or supplies and fought to control local territories in the name of the shogun. The vassals were rewarded for their service by being appointed as lesser lords and were given land that could be used for farming.

The vassals did not work the land; they simply owned it and hired peasants to do the hard labor, but owning agricultural land gave them the opportunity to increase their wealth and build their armies. These lands were called fiefs. The system in which a lord receives his power from owning land that is worked by peasants is called a feudal system.

The feudal system was introduced to Japan by the first shogun, named Minamoto no Yoritomo. In order to rise to power, Minamoto had created several alliances. Once he had consolidated Japan under his authority, he moved the capital to Kamakura and began confiscating land from former officials and gave that land to his vassals.

This was the first time that a military governor had taken control of the empire, and although the emperor was still officially in charge, Minamoto was the real power in Japan. His vassals controlled the lands that he gave them and formed the basis of a loyalty system that kept Minamoto in power.

The introduction of the feudal system to Japan changed their society. By owning land, the lesser lords could start building up their wealth and create their own armies. This created a society that highly valued both business and war. The lords surrounded themselves with a new class of highly-elite warriors called the samurai.

Samurai did not own land themselves but were financially supported by the lords they worked for. Japan in the Kamakura Shogunate became very militarized, with laws and social customs changing to reflect a new ethic of 'might makes right.' As a result, this was not a time of peace or stability. Warlords were constantly fighting for power, shoguns and emperors were overthrown as vassals developed enough power to form their own shogunates, and samurai battled across Japan in the name of the lords who wanted it all.

Japanese culture changed drastically during the Kamakura Shogunate, a period when Japan was ruled by a military governor called the shogun. Although Japan had an emperor, he was really just a figurehead. The shogun had the real power, and his power came from a series of vassals who gave their support in exchange for land.

The vassals ruled over these lands as lesser lords and used peasant labor to build up their own fortunes. The system of lords building power by owning land that is worked by peasants is called feudalism. The feudal system in Japan was started by Minamoto no Yoritomo, the first shogun who used military alliances to take control of Japan and then repaid his supporters with properties.

Although the lord-vassal system was great in theory, realistically it created a highly militaristic culture in Japan and started an era of war and instability. Lesser vassals fought for control, and when they became powerful enough, they fought the shogun.

This lesson provided a foundational knowledge in some key concepts, preparing you to:

Samurai Overview, History & Code | What is a Samurai?

Bushido Code Virtues | What is the Samurai Code of Honor?