In ''The Masque of the Red Death,'' there are only two major characters: Prince Prospero and the mysterious masked figure, who we later find out is the Red Death.

To start out by looking at Prospero, let's be honest here: the prince isn't a very likable protagonist. This shouldn't really come as a surprise to us, though, since Poe is not necessarily known for creating admirable characters. So why is the prince unlikable? To begin with, he's a terrible and insensitive leader. During the plague, he only cares about saving himself and his friends, and he does nothing to help the majority of his kingdom. He's also a fool, as he thinks he can escape death by locking himself in his castle and partying with his friends.

We also get the impression that Prospero is a little bit crazy. What sane person throws a terrifying masquerade party during the middle of a plague? Who takes the time to create a room so frightening that his guests don't even want to enter it? Finally, the prince can be described as proud. When the masked figure appears at his party, he becomes outraged. He yells out, ''Who dares insult us with this blasphemous mockery?'' He's so offended by the guest's 'costume' that he runs up to him and threatens him with a dagger. Little does he know that he just confronted the Red Death, the very thing he was trying to avoid.

Now let's look at the Red Death. He's the mysterious figure that arrives at Prospero's party at midnight. When he first appears, he is described as ''tall and gaunt.'' He's dressed in burial shrouds, and his 'mask' looks like the face of a corpse. While at the party, this ghastly creature doesn't say anything. He only stalks around the rooms and scares the other guests. When Prospero confronts him, he quickly kills the prince by simply facing his direction. After he kills Prospero, he's attacked by the others. They try to take off his mask and see who is behind the costume, but as we already know, he isn't wearing a costume. He then takes over the castle and kills every last person at the masquerade party. 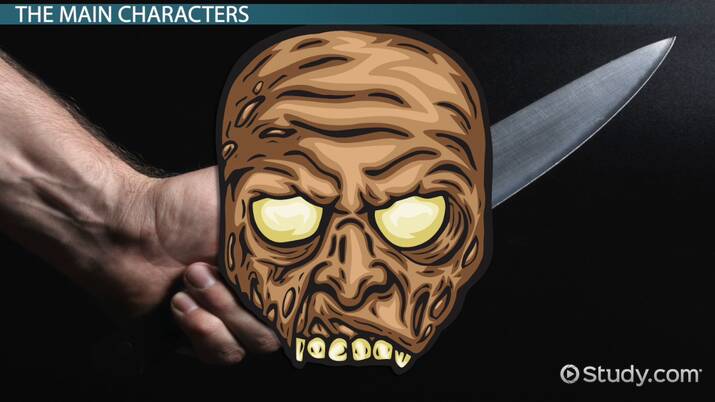 Coming up next: The Purloined Letter: Setting & Themes

Now let's take a look at some of the minor characters, starting with Prospero's friends. These are the unnamed people who Prince Prospero invites to his castle during the plague. They think that they will be safe in the isolated castle, but they end up facing the same fate as Prospero after confronting the Red Death at the party.

There's also the entertainment. Before Prospero welds shut the iron gates of his castle, he makes sure to hire various entertainers to amuse his friends. He hires ballet dancers, clowns, and musicians. Unfortunately, they also fall victim to the Red Death.

The Setting of the Story

Poe's short story has a fantastic setting, which is where a story takes place. In this case, it's set in a fictional country sometime during the Middle Ages. The descriptions of the plague remind us of Italy during the Bubonic Plague, and the Prince's last name also suggests that he's either Italian or Spanish. Although we have these clues, the specific location of the story is never revealed.

The events of the story take place in Prospero's castle, which is described as being ''deeply secluded.'' After about five or six months of being in the castle, Prospero throws an elaborate masquerade party for his guests. This party takes place in a suite of seven dimly-lit rooms. Prospero gives each room a certain color theme. The first room is blue. It has blue walls, and all of the decorations in the room are blue as well. The other rooms are purple, green, orange, white, violet, and black. The last room is especially horrifying with its blood-red windows and a large clock that rings loudly at the top of every hour. Many of the guests are so intimidated by this room that they avoid it entirely.

In his short story, Poe takes a long time describing the scene of the party. He does this because he wants his readers to feel the same sense of fear that the guests would feel. The atmosphere and overall effect of the story would not have been as profound without taking the time to write about the specific details of the setting.

In Edgar Allan Poe's ''The Masque of the Red Death,'' the major characters are Prince Prospero and the Red Death, who first appears to be another guest at Prospero's masquerade party. The minor characters in the story are the prince's guests and hired entertainers.

The setting, or where the story primarily takes place is in Prospero's castle in a fictional country during the Middle Ages. Prospero and his guests lock themselves in this remote castle to avoid the Red Death. After several months, Prospero throws a party in a suite of seven differently colored rooms. These rooms seem to symbolize the stages of life, with the blue room representing birth and life and the black room representing death.

The Masque of the Red Death: Theme & Quotes

The Man Higher Up by O. Henry Summary

The Pit and the Pendulum: Setting & Characters

The Murders in the Rue Morgue by Edgar Allen Poe | Summary, Analysis & Characters

Satire in The Devil & Tom Walker

The Pit and the Pendulum: Theme & Symbolism