The Mexican-American War between Mexico and the United States took place in the mid-1800s. In this lesson, learn about the conflict that led up to the war and what brought it to an end. Updated: 02/29/2020
Create an account

Well, just like arguing neighbors, Mexico and the United States couldn't agree about the border of Texas. Mexico is located directly below the U.S., and its government felt the Texas land should end at the Nueces River (pronounced noo-ey-suh-s). Can you guess why? Because it gave Mexico more land! But the United States disagreed, saying that Texas should end at the Rio Grande River because (you guessed it!) this would give more land to our country. 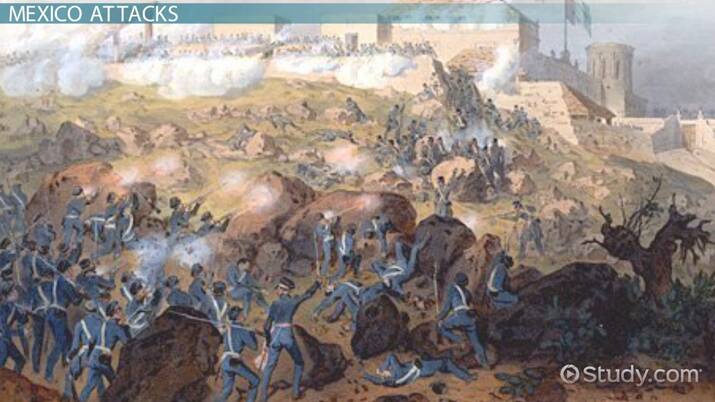 Mexico got so mad about the situation that its government decided not to work with the United States anymore. It gave the U.S. the ultimate silent treatment! The country's president at the time and the eleventh president of the United States, James K. Polk, sent a secret mission of government leaders to Mexico in hopes that they could work with the other country to resolve the issue. But the Mexican government refused to meet with them.

President Polk got news of this refusal, so he began preparing for war. However, Mexico beat him to it. Mexican soldiers went across the Rio Grande River and attacked American troops. War had begun. There were many battles and several American victories. More American troops died from disease and illness instead of actual combat. Even with these struggles, the American forces conquered Mexico City in 1847.

President Polk sent a representative named Nicholas Trist to Mexico to create a peace treaty, but the president got impatient that it was taking so long. He asked Trist to come back so he could send another person instead. If the President of the United States gave you an order, you would probably follow it, right? Not Trist! He stayed and signed the Treaty of Guadalupe Hidalgo, which was a document that officially ended the Mexican-American War.

So what did the United States get for winning the war? Quite a bit of land. The land that became a part of the United States after the Treaty of Guadalupe Hidalgo was signed included what today is most areas of New Mexico, Utah, Nevada, Arizona, Texas, California, and the western area of Colorado. In exchange, the United States paid Mexico $15 million.

After Texas was annexed by the United States, there were disagreements between the U.S. and Mexico about the border. President James K. Polk, the eleventh president of the United States, led America through a war with Mexico after Mexican troops attacked American soldiers. After a United States victory, the Treaty of Guadalupe Hidalgo was written, and it officially ended the Mexican-American War.

The Fight for Tennessee: Battles at Chickamauga, Chattanooga & Knoxville

The Texas Revolution: Lesson for Kids

The Mexican-American War, Treaty of Guadalupe Hidalgo & the Wilmot Proviso