Migration describes a person or entire population moving from one place to another seeking a better life or by force. Learn more on the migration of humans since the year 1500, and the time frames used to describe different periods of migration in history, including colonization and persecution, industrialization, and the 20th century. Updated: 10/28/2021
Create an account

Living in the Northeastern United States, many of my community members trace their ancestry back to Europe. For instance, on any given spring or summer weekend I don't have to travel too far before I hit a Polish dance competition or a German Folk festival.

Although this seems just like everyday life to me, it's an excellent example of how migration has played a huge role in our modern world. In today's lesson, we'll take a look at migration and its effects on our world, specifically migration since the 1500s.

For starters, migration is simply defined as movement from one place to another. When speaking of human migration, historians often consider anything after the 1500s to be more modern human migration. Also, due to the relative isolation of Asia during this time period, this topic usually deals mostly with European migration. With this in mind, today's lesson will break this very large time span down into three general time frames, giving a very brief survey of each. These time frames will be colonization and persecution, industrialization, and the 20th century. 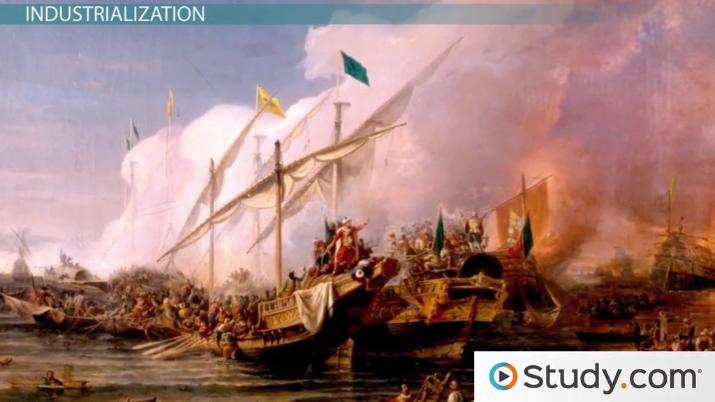 Try it now
Back
Coming up next: Colonialism History, Effects & Examples | What is Colonialism?

To get things going, we'll start with the period of colonization and persecution. When speaking of colonization, all one needs to do is open up any American History textbook and read page upon page of European powers establishing colonies in the Americas.

For example, the late 15th century saw Columbus sailing the ocean blue, which rather quickly led to the rush toward colonization. With this rush toward colonization, the 1600s saw the English, the Dutch, the Germans, and several other European powers migrating to the Americas. Not simply limited to the Americas, the period of colonization also saw European powers colonizing Africa, parts of Southeast Asia, and even Australia.

According to historians, one of the main catalysts for internal European migration was religious and racial persecution. This is known as forced migration, in which people are coerced away from their home regions. Excellent, yet tragic, examples of forced migration were the Atlantic slave trade systems and the thousands of Jews and Muslims who fled Spain during the infamous Spanish Inquisition. The time period also saw Eastern Europeans moving westward to escape the ever expanding Ottoman Empire of modern day Turkey.

With this brief summary of colonization and persecution, we move our way up to industrialization, the process in which a society moves from a mainly agricultural society into one centered on the manufacturing of goods and services.

Being usually linked to the late 18th and 19th centuries, industrialization was a huge catalyst for labor migration, people moving from their home regions in search of employment. An excellent example of this was the influx of Irish immigrants into the United States, most of whom were looking for work after the devastating 19th century Potato Famine which devastated their lands.

The industrialization of the global economy also saw migration greatly affected by urbanization, the movement from rural to urban areas. In other words, thousands upon hundreds of thousands of farm workers left their fields and moved to the cities in search of employment. According to many historians, the process of urbanization had its origin in the United Kingdom and then spread throughout the world.

With this we come to the 20th century. According to many sources, the late 19th and 20th centuries saw unmatched levels of human migration. For instance, it's estimated and rather well documented that this time period saw millions of European immigrants coming to the US. In addition, immigrants from Asia also made their way to the American shores.

Turning our eyes away from migration to America, it's recorded that internal migration also occurred in Asia during this time period. For instance, the region of Southeast Asia saw immigrants coming from places like India and Southern China.

Migration is defined as the movement from one place to another. Since the 1500s, human migration can be discussed in the time frames of colonization and persecution, industrialization, and the 20th century.

When speaking of colonization and persecution, the 1600s saw many Europeans migrating to the Americas. This general time frame also saw Europeans moving into Africa, Southeast Asia, and Australia. As for persecution, this same time period also saw many examples of forced migration, in which people are coerced away from their home regions.

Industrialization, the process in which a society moves from a mainly agricultural society into one centered on the manufacturing of goods and services, was another catalyst for human migration. This was seen in the form of labor migration, or people moving from their home regions in search of employment, and urbanization, the movement from rural to urban areas.

The 20th century saw unprecedented levels of migration as millions upon millions of Europeans and Asians came to the shores of America. However, it also saw internal migration occurring in Asia.

The Migrations of Humans Since 1500
Related Study Materials