The Mughal Empire practiced religious tolerance and consolidated smaller kingdoms within present-day Pakistan and India. Learn about some characteristics of the empire's culture, its rulers such as Babur and Abu Akbar, and the Hindi influences on God-ism. Updated: 11/03/2021
Create an account

Throughout history, the lands of India and Pakistan have been ruled by many differing empires and forces. Today, we'll travel back to the past, discovering one of these ruling entities as we explore the Mughal Empire.

To begin, the Mughal Empire ruled over India and Pakistan in the 16th and 17th centuries. This empire gets special kudos from history in that the Mughal rulers were Muslim, yet for most of their reign they peacefully ruled over a predominately Hindu population. In other words, the rulers were Muslim while most of the commoners were Hindu. However, and very unlike many other empires, the Muslim Mughals were surprisingly tolerant of other religions. In fact, it's recorded that they even allowed Hindus to hold senior positions within the civil government and the military. 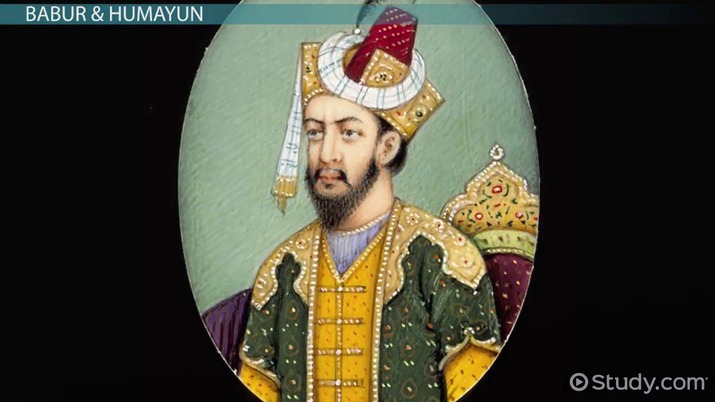 Coming up next: Babylonian Captivity of the Church and the Decline of Papal Authority

As an empire, the Mughals were able to consolidate the smaller kingdoms of South Asia (specifically within India and Pakistan) into one centralized government. They also succeeded in bringing Persian and Muslim culture into Hindu life. However, it must be mentioned that Hindu culture was not lost. In fact, under Mughal rule the Persian language combined with Arabic and Hindi to form the language of Urdu.

When taking into account their propensity toward religious tolerance and the way they were able to combine both Muslim and Hindu culture, I like to use some alliteration and think of them as the Great Mixing Mughals or to borrow an American term, the Melting Pot Mughals. Whichever you choose, history usually gives them a nod for their respect for the rights and cultures of those within their borders.

Keeping this key point in mind, let's fill in some history for this empire. The Mughals were descendants of the Mongol Empire. Like the Mongols, the Mughals were a military force to be reckoned with. In fact, it's asserted that they were some of the first in the region to use guns in warfare.

Babur is often considered the first Mughal emperor. Interestingly, he was believed to be a descendant of the great Genghis Khan. Coming to power in Delhi sometime around the year 1526, Babur was a religiously tolerant leader, who mixed the cultures of the Mongols, Persians, and Hindus into one. It's even reported that he respected the Hindu practice of not butchering cows. Remembering that he was tolerant to other religions and that he was the first emperor, I think we'll be safe remembering him as Babur the Benevolent at the Base of the empire.

Unfortunately for the people of the empire, Babur's son, Humayun was a catastrophic ruler. He lost much of the lands established by Babur and was more interested in a life of frivolity and drug use than ruling. Although he did at one point try to regain some of the empire, we can remember him as Humayun the Horrible.

The last emperor we'll discuss is Abu Akbar. He is considered by most to be one of the greatest rulers in Asian history. Fortunately for the Mughals, he regained much of the land lost by previous emperors.

Taking this even a step further, history tells us that Akbar's reign saw the birth of a new state religion known under the rather broad term of God-ism. Stated rather simply, the Mughal God-ism was a mixture of Hindu, Islam, Christianity, and Buddhism. On an interesting side note, within this system of God-ism, Akbar took the liberty of declaring himself a deity! Overlooking this little sojourn into self-aggrandizement, we can remember this guy as Akbar the Absolutely Admirable.

With religious toleration, the Mughal Empire ruled over India and Pakistan in the 16th and 17th centuries. Descending from the Mongols of the Far East, they were Muslim rulers who, for the most part, peacefully ruled over a predominately Hindu population. Not only were they religiously tolerant, they also combined the cultures of the people within their lands. For instance, their reign saw the use of Urdu, the Persian language combined with Arabic and Hindi.

Babur is considered the first Mughal emperor. He was a religiously tolerant ruler who took power in Delhi around the year 1526. For this reason, we can remember him as Babur the Benevolent at the Base of the empire.

Babur's son, Humayun was a disastrous ruler. Losing much of the empire's lands, we can remember him as Humayun the Horrible.

Abu Akbar is given the title of one of the greatest rulers in Asian history. He regained much of the land lost by previous emperors, he married a Hindu princess, and removed a prejudice tax against non-Muslims. Going even a step further, he mixed the religions of his lands into a belief system known as God-ism, a mixture of Hindu, Islam, Christianity, and Buddhism. In this religion, he was considered a god. With this, we'll remember him as Akbar the Absolutely Admirable.

Post-Modernism & Historiography in the 20th Century

Controversies Surrounding the Study of Adult Development and Aging

Early Human Communities Around the World

What is a Village Panchayat?