Steve is campaigning to be a county commissioner on the board for his county. His friend, Gary, is a professor at the local college and has agreed to help Steve with his campaign. Gary and Steve are putting together campaign buttons for a rally they are both hosting in a few days. There are 30 buttons total, 13 buttons are blue and 17 buttons are red. Gary puts all of the buttons into a bag. Steve and Gary both want to wear red buttons to the rally. What is the probability that Gary will pull two red buttons in a row out of the bag without looking? To solve this problem, you need to understand the Multiplication Rule of Probability. The Multiplication Rule of Probability means to find the probability of the intersection of two events, multiply the two probabilities.

Steve and Gary's button scenario is an example of dependent events. This is a slightly more complicated problem, so let's start with independent events first. 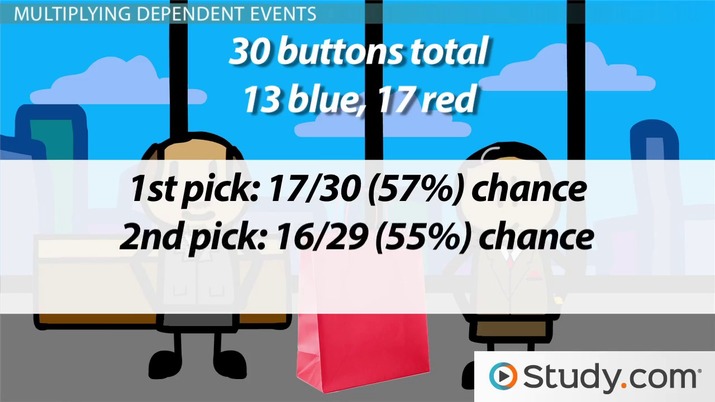 Coming up next: Math Combinations: Formula and Example Problems

Gary wants to help Steven in researching the voting trends in each of the towns in the county. Steve covers the two towns pretty well in his campaign. Steve talks to the townspeople about his policies. He passes out flyers and puts up signs in the two towns to spread the word about his candidacy. After doing this, Gary and Steve collect data about each town's feelings towards Steve as a candidate. Steve wants to know the probability of winning over two towns in the county. This is an example of independent events, because we are assuming that one town's voting patterns do not affect or depend on the other town.

In Town A, one out of every four people felt favorable towards Steve as a candidate. Steve has a 25% chance of winning the votes from Town A.

In Town B, five out of every seven people felt favorable towards Steve as a candidate. Steve has a 71% chance of winning the votes from Town B.

Steve asks Gary, what is the probability of winning the votes in both towns? To figure this out, Gary will use the multiplication rule of probability and this formula: P(A and B) = P(A) * P(B).

This is the multiplication rule for two independent events. This formula is read: the intersection of event A and event B equals event A multiplied by event B.

This means that Gary has a pretty good chance of pulling out two red buttons independently, but for both to happen together is pretty unlikely!

Now that you understand the multiplication rule of probability, let's practice with a few examples.

Lisa, Gary and Steve are playing a game at their weekly game night get-together. They decide to play Pretzel first, a game that has different colored squares on a mat where each player places a hand or a foot on a different color depending on the spinner. There are two different spinners, one is labeled right hand, left hand, right foot and left foot. The second spinner is labeled with colors; there are four purple squares, three blue squares, four pink squares and three orange squares randomly arranged on the spinner. What is the probability of Gary getting left hand, purple square?

The correct answer is seven percent. The two spinners are separate spinners, and they do not effect one another. Therefore, we have two independent events. We can determine the probability of the intersection of these independent events by using this formula: P(A and B) = P(A) * P(B).

The probability of getting left hand is one out of four, since there are four selections on the spinner and only one is the left hand. The probability of getting purple square on the second spinner is four out of 14, since there are four purple squares with a total of 14 squares on the spinner. To find the intersection of these independent events, simply multiply the two events like this: 1/4 * 4/14 = .07 or 7%.

Addition Rule of Probability Uses & Examples | What is Additive Probability?

Matrix Concept, Parts & Examples | What is a Matrix?

How to Calculate the Probability of Permutations

Permutation Formula & Examples | What is Permutation?