The nature of modern wars and conflicts is that they generally occur because of a country's nationalism. Explore why war exists and look into the various types of war, apart from nation-states fighting other nation-states. Updated: 04/10/2022
Create an account

Why does war exist? What causes war? This is very much a philosophical question, and it's not my place in this lesson to delve into existential questions on the problems that cause war. The sad reality is that war exists. It has since the dawn of time, and there seems to be no signs of it letting up.

For example, Slavic nationalism in the Balkan region helped lead to the assassination of Archduke Franz Ferdinand, which proved to be the 'spark' that ignited World War I. And of course, there was Adolf Hitler's National Socialist Party, with its fanatical belief in the supremacy of the Aryan race. The bottom line is extreme nationalism has been a leading cause of 20th-century conflicts.

War has broken out for other reasons, too. While religion has been a major cause of war throughout world history, its role in 20th-century conflicts has been more limited. Still, elements of religion have worked their way into modern conflicts. The Indo-Pakistani Wars, lasting a half century, had strong religious elements. This conflict pitted Hindu India against Muslim Pakistan. And of course, modern Islamic terrorism is fueled primarily by the terrorist groups' interpretations of Islam. In this sense, we can also think of war as arising from a clash of cultures.

Ethnicity has also been a source of conflict. Sometimes this is tied in with religion but not always. Think of the Nazis in World War II. The Nazis believed the German race was superior and sought to wipe out the Jewish race and subjugate Slavic peoples. The Yugoslav Wars of the 1990s were ethnic conflicts, pitting various Eastern European ethnic groups against one another. A term closely associated with ethnic conflict is genocide. Genocide is the systematic destruction of a specific ethnic or racial group. The Holocaust is probably the most famous example of genocide. 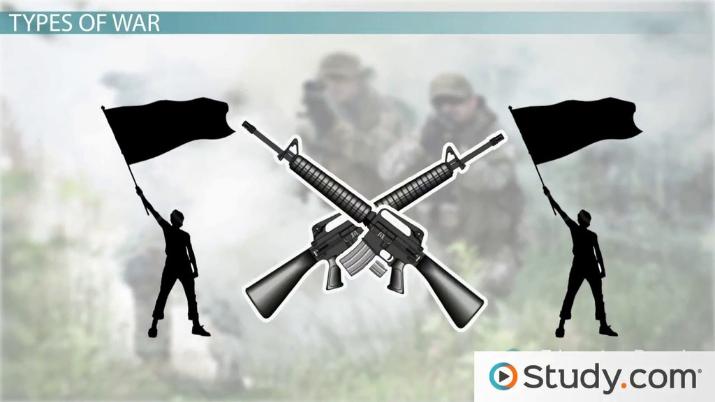 Coming up next: Understanding the Balance of Power, Polarity & Collective Security in World Conflicts

Now let's look at a few different types of war. We tend to think of war in terms of nation-states fighting other nation-states, but it's more complex than that. Not all twentieth century conflicts follow the typical model of World War I or World War II.

A civil war, as we know, is a war between competing factions within the boundaries of a nation. For example, in the early twentieth century, the Russian Civil War pitted the Bolshevik government and its Red Army against the anti-Bolshevik forces in Russia. As of the summer of 2014, there is a civil war taking place in the country of Syria.

We already discussed the role of ethnicity. Ethnic wars are fought between competing people groups. In the United States ethnic conflicts do still occur amongst groups, perhaps on a different scale than other parts of the world like Africa and the Middle East where ethnicity is a major source of conflict. Ethnic war is often associated with genocide, which we have already discussed.

A resource war is a war in which one country or group attacks another in order to acquire its resources. This might include oil, diamonds, gold, or other resources. Some experts have considered the recent Iraq War to be a resource war, although this is a controversial view. Many experts believe resource wars are likely to be more common in the future.

Terrorism is a type of war that has existed throughout history and seen quite a bit in modern day. Terrorism consists of violent acts intended to invoke fear. Terrorism is typically carried out against non-military targets. Not all acts of terrorism are fueled by religious ideology, but some can be.

One last thing I want to mention, and this is kind of a freebie. I just want to make sure everyone understands the concept of total war. Total war is a war in which a belligerent mobilizes everything available for the sake of making war. Industry is harnessed, civilians take part in war efforts in one way or another, and the whole of society is placed on wartime footing. World War II is a great example of total war. By contrast, the Vietnam War and the Iraq War are not considered total war.

Let's review. Nationalism is extreme pride in one's country. It has been a leading cause of war throughout the course of the twentieth century. Genocide is usually associated with ethnic war. It is the systematic destruction of a specific ethnic or racial group. A civil war, as we already know, is a war fought between competing factions within the confines of a nation. Ethnic wars are fought between various competing ethnic or racial groups. Terrorism consists of violent acts intended to invoke fear. It is usually directed against non-military targets. Finally, total war takes place when a belligerent mobilizes everything available for the sake of making war.

Whew, all this talk of war makes me want to listen to some John Lennon. 'All we are asking is give peace a chance.'

Reference this lesson's details as you prepare to:

War Causes & Factors | What is War?

The Impact of Globalization on Developing, Transitional & Developed Countries