Fungi are organisms scientists theorize evolved from an aquatic environment before migrating to land. Learn about the origin of fungi and understand how they may have adapted to living on land by forming symbiotic relationships with plants. Updated: 11/09/2021
Create an account

The Origin of Fungi

Look at the three images on your screen. From left to right is a plant, fungus, and animal. Look at another set of images. Again, from left to right is the microscopic structure of a plant, fungus, and animal. Based off of these photos, do you think that a fungus is more closely related to a plant or to an animal? The answer may surprise you: fungi are more closely related to animals than they are to plants, despite their appearance.

However, DNA and other molecular analyses have shown us that fungi are even more closely related to unicellular protists than animals. In fact, both fungi and animals evolved from unicellular protists, although they evolved to become multicellular organisms independently of one another. These ancestors diverged from one another around one to one and a half billion years ago. 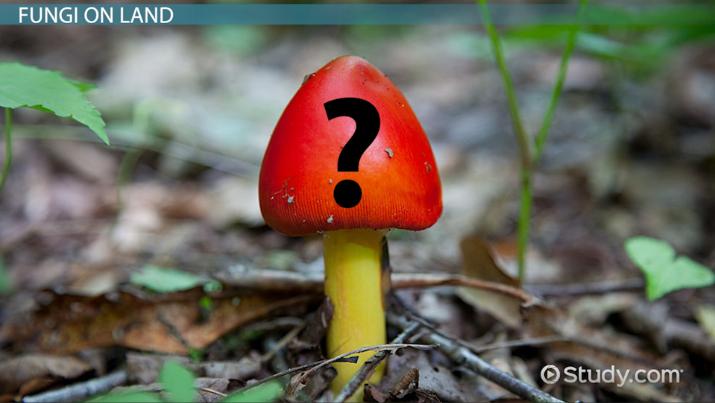 Try it now
Back
Coming up next: The Diversity of Fungi

It's a matter of debate right now whether fungi first evolved in an aquatic environment or on land. The prevalent belief among biologists right now is that fungi evolved in water, but the oldest fossils of fungi are those that have been found on land.

The reason it's so hard for us to figure what happened when and where with fungi is because fungal structures preserve very poorly as fossils, unlike bone for example. On top of that, fungal morphology is many times so broad or vague that it's difficult to tell in a fossil whether or not an observed structure was indeed part of a fungus or another living organism altogether.

What we can say with more certainty is that the earliest life on land was probably characterized by lots of green slime all over the place. This green slime was a mixture of algae, cyanobacteria, as well as fungi. This means fungi likely colonized land before plants.

It is believed by some biologists that the world's first very large terrestrial organisms were actually multi-cellular fungi that grew as massive tree-trunk-like organisms, up to 26 feet tall, dwarfing the plants and other living organisms around them. They were able to grow to such large sizes by feeding off of the large amounts of living matter, as well as debris of everything from bacteria to algae to early plants that had accumulated over billions of years.

Eventually, certain fungi formed symbiotic relationships with plants on land. Symbiosis means the living together or close association of two different organisms. In fact, some of the best fossils of fungi are found associated with plant fossils, where mycorrhizal fungi are present.

Mycorrhiza is a symbiotic association between a fungus and a plant root. The fungi can either form around the roots of a plant or penetrate into the root itself. Some of these relationships are mutualistic, where both the fungus and plant derive needed nutrients, although they can be parasitic, where either the plant or fungus benefit to the detriment of the other.

If it wasn't clear, the origin of fungi and how they came to be on land is not exactly clear. It's suspected that animals and fungi evolved separately from a common ancestor long ago. Although it's believed fungi first evolved in aquatic environments, the best fossil evidence suggests they arose on land.

Here, long ago, fungi, not skyscrapers or trees, dominated the skyline as they shared the land with bacteria, algae, and early plants. Some of these fungi, mycorrhizal fungi, even developed symbiotic relationships with these plants. Symbiosis is when two different organisms live together or share a close relationship, and mycorrhiza is a symbiotic association between a fungus and a plant root.

The Origin of Fungi and Its Move to Land Overview

Work on the lesson on fungi in preparation to:

Try it now
Back
Create an account
The Origin of Fungi and Its Move to Land
Start today. Try it now
Campbell Biology: Online Textbook Help