In geometry, the parallel postulate argues that if a third line is used to connect two straight lines, and that third line creates two angles on the same side that are each less than 90 degrees, then the two straight lines will eventually intersect. Review examples and recognize why this postulate is important in geometry. Updated: 09/29/2021
Create an account

What Is the Parallel Postulate?

Thousands of years ago, a Greek mathematician named Euclid laid out the foundations of plane geometry in five postulates, which are statements assumed to be true without proof. In today's lesson, we will cover his fifth postulate, called the parallel postulate, which states that if a straight line intersects two straight lines forming two interior angles on the same side that add up to less than 180 degrees, then the two lines, if extended indefinitely, will meet on that side on which the angles add up to less than 180 degrees.

Confused? You probably are, and that's okay. Let's simplify what that technical mess of a definition actually means. Suppose we have two lines, as shown here on screen.

We draw a third line that intersects the other two and label the interior angles alpha and beta, as shown here.

Imagine extending the two lines indefinitely. In our figure, it can be clearly seen that they would eventually intersect.

And not this side:

Also note that the postulate states that the intersection would only occur if the sum of alpha and beta is less than 180 degrees. If you're still confused, then why don't we take a closer look at the parallel postulate with some examples? Hands-on stuff never hurts, right? 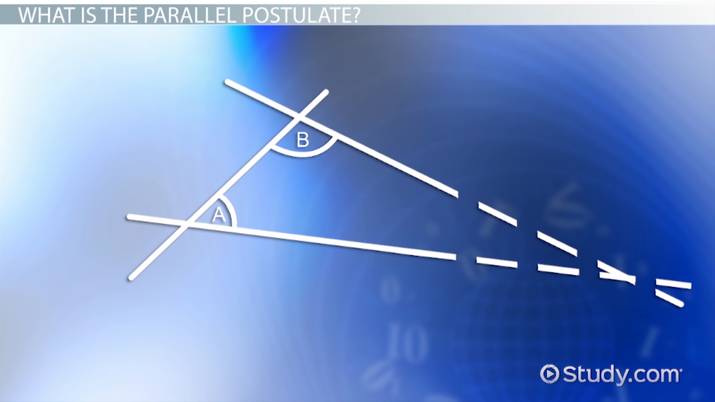 Coming up next: What Are Polygons? - Definition and Examples

We can have three general cases with respect to the parallel postulate, starting out with drawing two parallel lines labeled m and l and a transversal labeled n. We place the angles alpha and beta to the right of the transversal. In the resulting figure, it's easy to see that lines m and l would never cross each other.

Oh, and here's a quick and important note: recall from geometry that when m and l are parallel, the angles alpha and beta are supplementary. That is, they sum up to 180 degrees. Now suppose that we rotate line m clockwise. Our rotation reduces the angle measure of alpha, meaning that the sum of alpha and beta also become less than 180 degrees. In this case, it's easy to see that the lines m and l would eventually cross to the right of transversal n.

The same scenario would have resulted if we kept line m fixed and instead rotated line l counter clockwise.

Now let's go back to lines m and l being parallel. We now rotate line m counter clockwise, as shown on the screen.

This rotation increases the angle measure of alpha, making the sum of alpha and beta more than 180 degrees. In this case, we can see that lines m and l would never cross to the right of the transversal, in accordance with the parallel postulate.

Hopefully, we're all squared away here. (Catch that geometry joke?) Okay, a postulate is a statement assumed to be true without proof. The parallel postulate states that if a straight line intersects two straight lines forming two interior angles on the same side that add up to less than 180 degrees, then the two lines, if extended indefinitely, will meet on that side on which the angles add up to less than 180 degrees. We have looked at what this definition means with visual examples and, in our analysis, the parallel postulate held in every scenario. You should now feel pretty confident in understanding this important postulate.

Geometric Proof Types & Formats | What is a Proof in Geometry?

The Perpendicular Transversal Theorem & Its Converse

Types of Subgroups in Abstract Algebra