In this lesson, you will explore the architectural and artistic design of the great Athenian temple called the Parthenon. Then, you can test your understanding with a brief quiz.
Create an account

Some buildings are just great. I mean, they just turned out amazing. The Empire State Building. The Coliseum. The Forbidden Palace. Architectural masterpieces. Ancient Greece, as the first major civilization of the Western world, is not about to be excluded from this list. The Parthenon, an Athenian temple to the goddess Athena, is one of the great architectural achievements of world history. Built between 447-432 BCE, it was a symbol of Athens when the city was at the height of its power. The Parthenon is exemplary of everything that ancient Greek architecture aspired to and has continued to inspire for millennia. 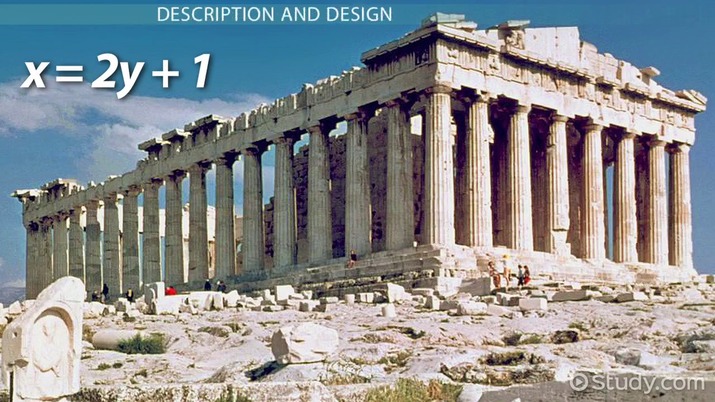 The Parthenon is built in the Doric order, the oldest of the Greek architectural styles. By the fifth century BCE, Greece was transitioning into a new style, the Ionic, and the Parthenon is seen as the crowning piece of the Doric style. The Doric order is defined by the use of tapered, grooved columns that have a wide, smooth capital, the top stone of the column on which rests the structure. The Doric entablature, the structure on top of the columns is most distinguished by an alternating series of marble panels. Half of the panels contain three vertical columns; these are called triglyphs and are thought to represent the wooden beams that Greeks used before stone temples were created. In between the triglyphs are metopes, blank panels that were commonly decorated with scenes carved in relief, so that the figures appear elevated from the background. Although the Parthenon is considered a Doric temple, it does contain a few Ionic elements, reflecting its place in this transitional time.

The Parthenon is the largest of the Doric temples, at 228 feet long and 101 feet wide, with columns 34 feet tall. It was designed by the architects Iktinos and Kallikrates but was commissioned by Pericles, the leader of Athens during the rise of the Athenian Empire. The Greeks were very conscientious about their art and modeled both sculpture and architecture on an image of ideal beauty that was based on perfect mathematical ratios. The Parthenon, for example, is centered around a ratio of x = 2y + 1, where x and y are the two aspects being compared.

Let's look at some concrete examples of this. The shorter sides of the Parthenon each have 8 columns, so y = 8. Since 2(8) + 1 = 17, there are 17 columns on the longer side of the Parthenon. You didn't know this lesson on art would require math, did you? Welcome to ancient Greece. This ratio is found everywhere in the Parthenon, defining the size of each part of the column, the distance between the columns, the height and width of the interior worship hall, and so on.

Art of the Parthenon

For the ancient Greeks, simply building this massive temple wasn't enough. It also needed to be filled with sculpture. The interior room once held a 38-foot tall gold and ivory statue of Athena, which has since been lost. Additionally, every one of the 92 metopes was carved, as was the 524-foot frieze, a section above the columns, that wrapped around the inside of the building. These are mostly in very high relief, meaning they are carved so that they are almost completely free of the background. The triangular section of the entablature above the entrance to the temple was also filled with marble statues.

The carvings throughout the Parthenon are narrative; they tell stories from Greek mythology. The 32 metopes on the long, north exterior wall depict the Sacking of Troy. The 32 metopes on the south wall are called the Centauromachy, or a battle with the centaurs. The east pediment, guarding the main entrance, contains scenes from a battle with giants, or Gigantomachy and the birth of Athena. The west pediment displays a battle with the Amazons, the Amazonomachy and a contest between Athena and Poseidon.

The interior frieze is a massive sequence of the Panathenaic Festival procession, a major religious ceremony held every four years, in which the people of Athens led a major procession to the temple in honor of Athena. The frieze shows people of all ages participating in this massive parade. The appearance of normal, mortal people in a temple is irregular in Greek art and displays just how highly the Athenians thought of themselves at this time. Thus, the temple to Athena is also a temple to Athens, center of the ancient world.

In ancient Greece, the city of Athens was noted for its advanced architecture. At no point was this more deserved than with the construction of the Parthenon, from 447-432 BCE. The Parthenon was a temple to the goddess Athena, patron of Athens, built at a time when Athens was at the height of its power and prosperity. It is built in the Doric order, the oldest form of Greek architecture, defined by smooth capitals, tapered columns, and alternating triglyphs and metopes. Like most Greek art, it was focused around mathematical ratios to create a sense of harmony, balance, and beauty.

The Parthenon was also heavily decorated, containing large statues, as well as long, narrative sequences of panels carved in relief. The most notable of these is the interior frieze, a 524-foot depiction of the Panathenaic Festival procession, a parade to honor Athena held every four years. Between the art and architecture of this temple, the Parthenon is well deserving of a place amongst the greatest architectural masterpieces in human history.

Once you have finished this lesson, you should be able to:

The Lost-Wax Casting Technique in Antiquity

The Struggle of the Orders: Plebeians and Patricians