Learn about the Pergamon Altar, one of the ancient wonders of the world and one of the best examples of surviving ancient sculpture. Afterwards, take the quiz and see what you've learned.
Create an account

The Pergamon Altar of Zeus

The Pergamon Altar is a wonder of the ancient world that was built in Pergamon, a Greek city in Asia Minor. The altar featured intricate carvings and was fairly large, measuring 36 meters wide and 34 meters deep, with a frieze (or the middle part of a wall) 2.3 meters high and 123 meters long circling it. The carvings in the frieze showed the war between the Greek gods and the Titans, called the Gigantomachy. They featured both Zeus and Athena.

There was a second frieze in the inner courtyard where the actual fire altar was. It stood 1.58 meters high, and it showed the life of Telephus. Telephus was the son of Heracles and a king of Mysia in Asia Minor. Bronze and marble statuettes of gods, mythological creatures, teams of horses, and women have been found among the ruins.

The image you're looking at on screen now isn't the original Pergamon Altar but rather a reconstruction of it on display in Berlin. The original site can still be visited in Asia Minor. 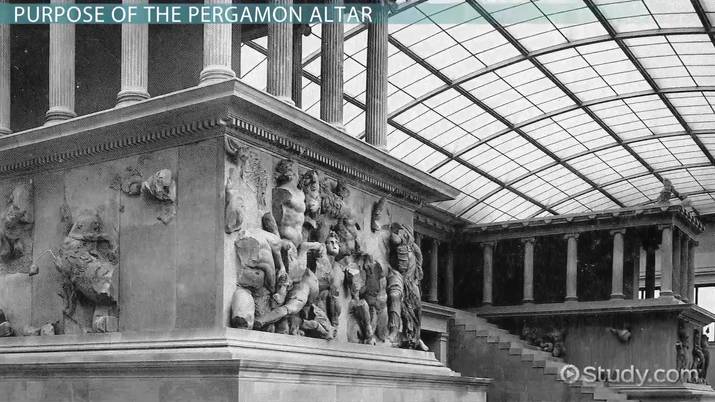 Coming up next: The Greek God Hermes: Facts, Myths & Symbols

Purpose of the Pergamon Altar

Despite its status as a wonder, ancient writers didn't mention the Pergamon Altar much, and never said for whom it was built. However, we can take a good guess. In 228 B.C.E., Attalus I declared his kingdom of Pergamon independent from the Seleucid Empire. Attalus and his son, Eumenes II, would have had the same problems every new kingdom has - trying to establish its credibility.

The friezes are key to this. The Gigantomachy showed the war between the gods and the Titans. The gods were traditionally the underdogs and only help from some Titans and Haphaestus' weapons helped them win. That would have been a perfect symbol for Pergamon, an undersized kingdom trying to stay independent from the Seleucids.

The inner frieze depicts Telephus, son of the greatest Greek hero Heracles. Telephus' kingdom hadn't been in the same area as Pergamon, but tradition said he built the city. The Pergamon kings might have hoped to get some of his fame and respect by featuring their city's founder.

Despite all of its political uses, and even its artistic quality, it was still just an altar. It was larger and better decorated, so it showed more respect for the gods, but its main purpose would have been animal sacrifices. They were killed in honor of the gods and in the hope of good luck in war, agriculture, trade, and even marriage.

Why Was the Altar a Wonder?

The Pergamon Altar was huge, but what is really impressive is the consistency. The Gigantomachy frieze was the most amazing feature. Despite it being almost 300 meters squared, it had a single design that made it clear one artist created it, even though around 40 artists must have worked on it.

There was also amazing detail. Each god was specifically crafted with their traditional weapons and allies, near the gods to whom they were closest. Aphrodite, the goddess of love and beauty, for instance, is on one side. Adjacent to her on the other is Ares, her husband, and the god of war. Their postures, hairstyles, shoes, outfits, and even sometimes opponents, were specifically chosen for each of the gods. There aren't any colors left, but we're pretty sure it was all painted, too. Visitors would have been awed by the site even before they came to it. The altar opened from the direction of the entrance, with a stairway of around twenty meters leading up to the actual altar.

The Pergamon Altar was a wonder of the ancient world that was built in Pergamon, a Greek city in Asia Minor. It was a wonder of the ancient world because it was massive and because of the amazing detail and consistency of the frieze, which is the middle part of a wall. The art found there is some of the best from the ancient world, featuring various depictions ranging from Telephus, the son of the greatest Greek hero Heracles and founder of Pergamon, to the Gigantomachy, which was the war between the gods and the Titans. But the altar was only built for the purpose of giving the new kings of Pergamon a connection to the past, and with it, the credibility they needed.

Human & Animal Forms in the Art of the Ancient Near East

Cave Paintings of the Paleolithic Age

What is a Reflective Essay? - Definition, Format & Examples