One of the interesting things we do in math is look at lines and angles, and we try to figure out a way to prove whether they are the same or have any other similarities. Even if two things look the same, mathematicians will never say they are unless they can prove it mathematically. That is where our theorems come in. A theorem is a proven statement. By using a theorem, mathematicians can prove a certain situation is definitely true or not. When mathematicians can prove that a certain situation is true, then they can move on and build on that information. This is how the field of mathematics has grown over the past hundreds of years. All the mathematics that we learn is based on layers and layers of mathematical proofs and theorems. 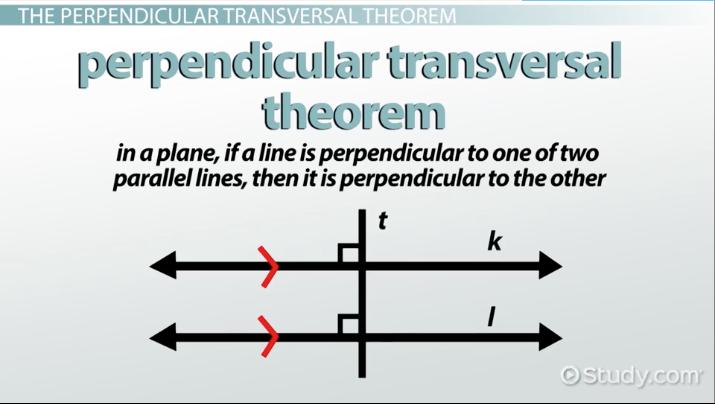 Coming up next: How to Find and Apply The Slope of a Line

The Converse of the Theorem

This converse statement now allows us to prove that two lines are parallel if the line that crosses both of them is perpendicular to both. In math, we need to be able to prove everything! So, sometimes you're given a problem where they tell you that these two angles are perpendicular. Then it might ask you if this information tells you anything about a pair of lines. If the two angles are corresponding angles of a line that crosses two other lines, then you can use our converse theorem to prove that the two lines are parallel.

Skew Lines in Geometry | What are Skew Lines?