The office of the President of the United States includes many advisors. This lesson explores the president's cabinet, the bureaucracy that handles the president's day-to-day operations, and other governmental bodies that advise the president. Updated: 10/07/2021
Create an account

The Chance of a Lifetime

You stare at your boss in open-mouthed surprise. You can hardly believe what you're hearing. It's the chance of a lifetime for a journalist like you. She has just asked you to write an exposé on the inner workings of the bureaucracy surrounding the president. You immediately agree to your boss's request and assure her that you'll get right on it and that you'll get the scoop on this subject like no one ever has before. She smiles at your enthusiasm and leaves you to your work.

Then it hits you. You haven't got the slightest idea about anything having to do with the bureaucracy surrounding the president. After a moment of panic, you pull yourself together and turn to your computer. Time for a little research. You know that the bureaucracy is the administrative organization that handles the day-to-day business of the government, but now it's time to learn some basics about the relationship between the bureaucracy and the president. You decide to focus your search on three main elements of the executive, or presidential, bureaucracy: the president's cabinet, independent regulatory agencies, and the Office of Management and Budget. 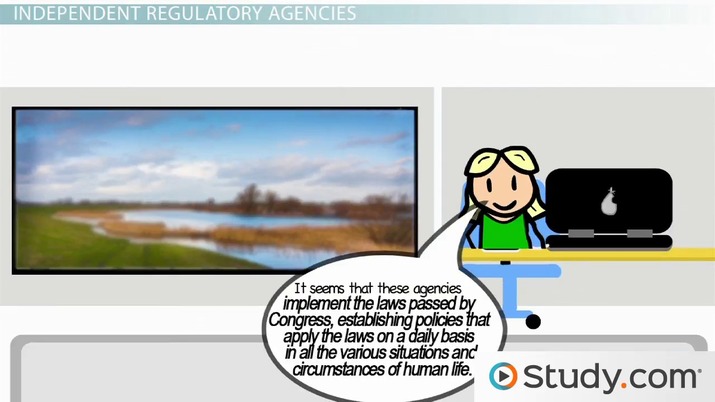 Coming up next: The Bureaucracy and Congress: Sources of Power & Influence

You begin hunting for background information about the president's cabinet, and pretty soon, you are wrapped up in all the interesting facts you are learning. The cabinet, you discover, is the president's advisory body. It is composed of 14 secretaries and one Attorney General who head up 15 different executive departments and who advise the president on the state of the country and on matters of policy. The president appoints his own cabinet members, but the Senate must confirm his choices by a majority vote.

You dig a little deeper, hoping to uncover a few interesting details to use in your article. You soon learn that the word 'cabinet' comes from cabinetto, an Italian word that refers to 'a small, private room' perfect for serious, confidential discussions. You also discover that the president's cabinet was established by George Washington and that it originally included only three members: the Secretary of State, War, and the Treasury.

By this time, you're already feeling slightly overwhelmed. This is going to be one huge project, but you plug away bravely, figuring that once you have all the background information in place, you can draw up your plan of attack and start setting up interviews with cabinet secretaries and workers.

You still need to find out about another part of the executive branch's bureaucracy - the independent regulatory agencies. You quickly discover that independent regulatory agencies are governmental bodies that create and enforce rules and regulations for a wide variety of activities supervised by the government. These agencies implement the laws passed by Congress, establishing policies that apply the laws on a daily basis in all the various situations and circumstances of human life. Although the president appoints the heads of these agencies (with the Senate's approval), he has no direct control over them. They operate independently and, ideally, free from political influence, but they are subject to review from Congress and the courts.

You hunt around for some examples and learn that the first such agency was the Interstate Commerce Commission, set up in 1887 to regulate the nation's railroads. Since that time, the ICC has been joined by such familiar organizations as the Food and Drug Administration (FDA), the Federal Communications Commission (FCC), the Environmental Protection Agency (EPA), the Occupational Safety and Health Administration (OSHA), and the Consumer Product Safety Commission (CPSC). 'Wow,' you think, 'these independent regulatory agencies play a huge role in the everyday lives of nearly all Americans, and most of the time, we don't even realize it!'

The Office of Management and Budget

You still have one more area to explore in your quest for background information, and this one could be a bit trickier because you've never heard of it before! The Office of Management and Budget, which was established in 1939, performs the critical task of implementing the president's policies throughout the executive branch and into every area of the government.

The OMB, as it is usually called, is responsible for five primary activities:

The OMB, then, is essentially the president's mouthpiece and assistant in financial matters and in making sure that the executive branch runs smoothly and effectively and communicates well with the rest of the government. It is responsible directly to the president.

By now, you have several pages of notes and a much better understanding of how the executive bureaucracy works. Now it's time to review.

As you glance back over your notes, you highlight a few key points:

You now feel that you have a solid foundation when it comes to understanding the executive bureaucracy, and you are ready to reach out and grasp your journalistic chance of a lifetime. 'Time to dig up some dirt,' you think with a smirk as you pick up the phone. Look out bureaucracy! Here you come!

The Presidency, the Cabinet & the Bureaucracy
Related Study Materials

Presidential Power Types & Examples | What Are the Powers of the President?

The Problems of Bureaucracy: Contributing Factors