Khadija is a geometry teacher. Not every student comes into her class understanding shapes and spatial relationships. Khadija believes that she can teach her students better if she understands the basic stages of geometric thinking. That is, she wants to know how her students might develop their thinking about shapes and space.

To help Khadija out, let's look at the different basic stages of geometric thinking. 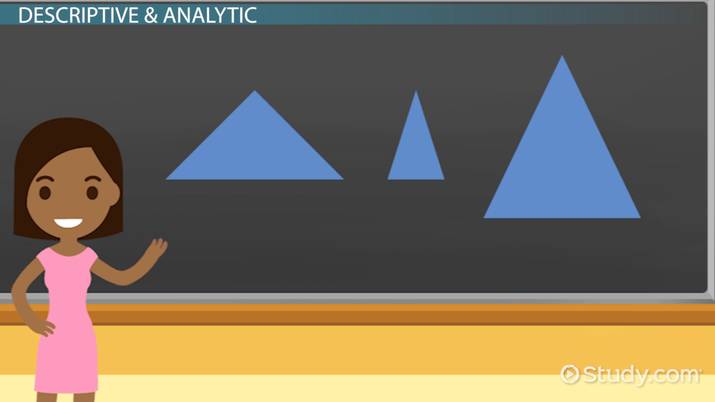 The first stage in geometric thinking is the visual stage, which involves noticing the way figures look. Students in this stage can recognize common shapes, like circles, squares, and triangles. They might also recognize a single component of a shape, such as the sides of a triangle or rectangle.

Most of Khadija's students have at least reached this stage when they come to her class. If she shows them a rectangle and a triangle, for example, they will be able to say which one is which. If she asks them to point to the sides of a triangle, they can do that, too.

But, what if Khadija's students were younger? What if they didn't know their shapes yet or weren't able to identify elements like sides or angles? Teachers can help students achieve success in the visual stage by incorporating activities in the classroom, such as working with blocks of varying shapes or labeling shapes with the correct term.

The next stage in geometric thinking is the descriptive stage. This can sometimes be referred to as the analytic stage as well. This stages involves recognizing more than one component of a shape and recognizing basic concepts about the components.

An example of this might be what happens when Khadija shows her students an array of triangles. Those in this stage are able to recognize different components, like sides and angles, and their relationship to each other. They also might understand ideas such as the concept that all angles in a triangle do not have to be equivalent.

This is where some of Khadija's students get stuck. To help them out, she can offer hands-on activities. For example, she might allow them to practice drawing different triangles, making sides longer or shorter and then seeing what happens to the corresponding angles when they do that.

The third major stage of geometric thinking is the abstract stage, which involves understanding the relationships between shapes and categories of shapes. At this stage, students are able to think in abstract ways about categories and relationships.

For example, Khadija might ask her students what the difference between rectangles and squares is. As they think about it, they might answer that because rectangles have four straight sides and four right angles, every square is a rectangle. However, they might also realize that because squares also have sides that are all of equal length, not all rectangles are squares.

Khadija might use hands-on activities to help her students reach this stage. Because this stage is about abstractions, though, she also might simply pose thinking questions, like whether all squares are rectangles and all rectangles are squares. They can then approach the problem the way they need to in order to understand the abstract geometric concepts Khadija wants them to understand.

What Is Math Fluency? - Definition & Components

Algebra vs. Geometry | Similarities & Connections | What is Algebraic Geometry?