Due to the increase in commercial activity during the Renaissance, the banking industry began to expand to make it easier for merchants to conduct business away from home. Learn more about the rise of banking in the Renaissance era, the Black Plague's impact, double system entry, and bills of exchange. Updated: 10/26/2021
Create an account

Introduction to the Rise of Banking

This is Claude. Claude lives somewhere between the 14th and 15th centuries. Claude peddles wool. Claude doesn't know it, but he's about to come into some money. Claude's going to need a bank. Lucky for Claude, banks are popping up all over Europe. Let's follow Claude to learn a few things about these new banks, their prominent members and their impact on Renaissance society. Before we get to all this, let's see how Claude gets his money.

Claude acquires his money through tragedy - other people's tragedy. He's a member of the Woolmen's Guild, a group of craftsmen who work together to control prices and fair trade practices. At their monthly meeting, Claude notices his fellow members aren't looking so hot. Henry is complaining about swollen joints, Fred has red spots and Sam is acting plain crazy. By the end of the week, everyone but Claude is dead. They all had the Black Plague. Realizing this signals the end of his Woolmen's Guild, Claude decides to branch out on his own. Trusting his former guild members won't mind ('cause they're dead), he takes their tools, their products and their trade routes. Claude now has a huge group of customers looking to him for all their wool needs. He's in such high demand, he can charge way more for his product. Claude begins to make some real money. 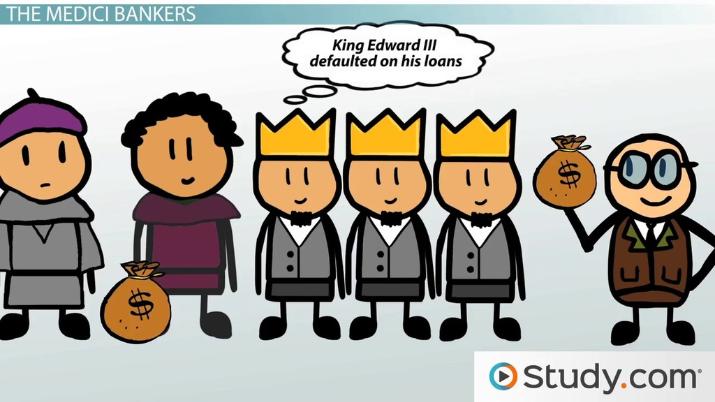 Coming up next: The Formation of Modern Nation States

Rise of the Middle Class

Soon Claude tires of traveling and looks for a place to set up a permanent shop. This brings him to Florence, Italy, a city made wealthy by the Crusades, overseas trade and Claude's personal favorite, wool. He sets up shop, and business starts booming. Soon he hires an apprentice, or a worker who learns his or her trade from a skilled employer. Before long, Claude's quite the merchant. With his thriving business, he joins a new breed of other merchants who become known as the middle class. Claude and his new middle-class friends soon come up with ways to diversify, or enlarge the range of products sold. Claude decides to add ladies' garments to his portfolio. His friend the candlemaker adds torches to his. These new additions will require funding, and Claude and his friends just don't have enough gold florins - gold coins made in Florence that were the standard money for most of Europe - the first coins to be mass-produced for trade across countries.

Lucky for Claude, another citizen of Florence, Giovanni di Bicci de' Medici, has just started a banking business across town. Giovanni and his family used the rise of trade and industry as a catalyst to grow their banks. This has made them one of the wealthiest families of Italy, if not all of Europe. Claude and his candle-making friend go see Giovanni, who tells them he's going to charge interest on their loans. This surprises Claude, since his priest always told him it was against the rules to charge usury, or interest.

Although Claude is a bit annoyed about the usury part, he decides to borrow the money. It can't be too bad an idea, since while he's there he runs into the Pope, who is also borrowing money. He also sees several of the European monarchs trying to take out money. He overhears one of them saying they need money to raise their own armies to protect their lands. He hears another gossiping how King Edward III of England defaulted on his loans from the Hundred Years' War. Goodness! No wonder the Medici can give so much of their money to support artists like Michelangelo, Brunelleschi and da Vinci. It seems everyone, even the Pope, owes them money! As Claude is leaving the bank, Giovanni's son Cosimo de' Medici calls out, 'If you're ever traveling abroad, we've got you covered. We've got branches in Bruges, Barcelona, even Cairo!'

With his money in hand, Claude's new business ventures continue to thrive, allowing Claude to spend his money on things like education and the arts. He even decides to imitate the Medici by becoming a patron, or financial backer, for a local artist. Seeing all the enjoyment Claude gets from this, his friend the candlemaker finds his own artist to back. Soon art is flourishing all over Italy!

All of these expenditures make it very necessary for Claude to keep better track of his finances. Lucky for him, the new banking system has come up with a practice called the double-entry system, an accounting technique that records each transaction as a debit or a credit. This makes it much easier for Claude to calculate his incomes and his outputs.

With his money finally under control, Claude decides to branch out from Italy into the rest of Europe. Since Claude doesn't want to carry a wagonload of florins across the borders, he avails himself of another banking advancement: bills of exchange, or promissory notes endorsed by the lender and the borrower. This new system is a precursor to our modern check writing and cashing system. This makes it much easier, and safer, for Claude, and the rest of the middle class to expand their businesses, while also allowing the banks to yield large commissions from the borrowed money. With these new banking inventions, Claude continues to grow his business, opening up sites all over Europe. Each time a new location opens, he hires new people, creating new wage earners, who in turn need more banks.

By the time Claude is ready to call it quits, he has money all over the continent. At his location in Venice, he deposits his gold ducats, the currency of Venice, which has joined the florin in international popularity. In Genoa, he places his money in the Bank of St. George, which has overtaken the bank business of the Mediterranean. At his location in France, he deals with Jacques Coeur, a Frenchman who used his personal wealth to become the Master of the Mint, or the guy in charge of the money, for King Charles VII. In Germany, he gives his money to the Fugger Banking family of Augsburg, whose founder was a clothsman, just like Claude.

In the remaining years of Claude's life, he and his money will continue to travel the European continent, visiting the banks that made his fortune possible. In his elder years, he will pass on what he has learned of banking to future generations. He will teach them the value of borrowing wisely to increase business. He will explain to them the double-entry system, he will show them the benefits of bills of exchange and he will regale them with stories of his dealings with the Medici family. Most important, he will tell them they too can grow their fortunes through proper banking practices. Who knows; he might even give a tiny head nod to the Black Plague!

Upon completion of this lesson, you should be ready to:

The Renaissance Economy: The Rise of Banking
Related Study Materials

The Birth of Parliament: Monarchs vs. the Aristocracy

Eastern Europe During the Reformation

Adoration of the Magi by Sandro Botticelli | Analysis, Overview & Themes

The Rise of the Dutch Republic & Their Golden Age: History & Timeline