In this lesson, you will explore the history of the powerful African kingdom of Axum and discover how the international economy affected both its rise and decline. Then, test your understanding with a brief quiz.
Create an account

Ok, that was a bad joke. But it was a good way to introduce the Kingdom of Axum, a powerful state from 100-940 CE in Africa, near modern-day Ethiopia. Axum was one of the most important kingdoms you've never heard of and a major trading nation. By this, we mean that its economy was almost entirely dependent on export and international trade.

Axum was a major facilitator of trade in the ancient world, responsible for moving goods between the eastern and western worlds that came from civilizations as distant as Rome and India. Just to give you an idea about what an important trading center this was, the capital city of Axum is considered one of the potential resting places of the Ark of the Covenant. 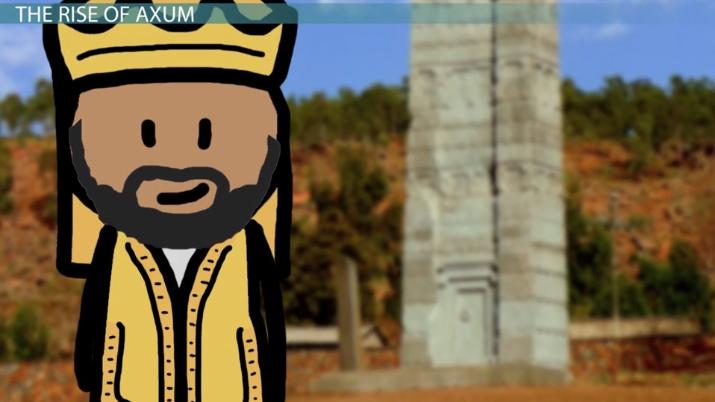 Coming up next: Ancient Trade Cities on Africa's East Coast

The Rise of Axum

Ethiopia is one of the oldest inhabited areas on Earth so naturally, Axum arose from a series of influential ethnic and cultural groups. Major influences include the Sabaean people from Southern Arabia, the local Da'amot people, and the declining Kingdom of Kush in modern-day Sudan. As Kush lost power, it presented the people of Axum an opportunity to grow and they took it.

Various Axum kings slowly expanded their influence in the first several centuries CE, formally conquering Kush by 350. With this, they became the political and economic power of the region. In fact, the Iranian prophet of the 3rd century, Mani, named Axum one of the four great powers of the time, along with Persia, Rome, and China.

Axum interfered in the Arabian Peninsula and northern Africa, expanding its control to an area of almost a million square miles that included parts of modern Ethiopia, Sudan, Egypt, Yemen, and Saudi Arabia. Axum adopted Christianity around 325 CE under the powerful King Ezana as well, connecting it culturally to a growing number of Christian kingdoms.

The majority of their wealth came from the rise of a new sailing technique that used seasonal winds to cross the Red and Arabian Seas, increasing the amount of trade that could pass through that region. Axum was right at the intersection of trade routes between the Mediterranean and these seas and was able to dominate the market on international trade.

The Decline of Axum

In the 7th century, the new religion Islam began spreading extremely quickly across the Middle East and Africa. The new Islamic powers grew in power and size and constantly clashed against rival Christian kingdoms. Axum, however, maintained good relations with their Islamic neighbors, since the city had safely harbored the early followers of the religion back in the year 615. Nevertheless, as the Islamic kingdoms grew in prominence they came to economically dominate the region, undermining the power of Axum. As Islamic powers gained control of the most important ports, Axum began a gradual decline near the end of the 7th century.

As the kingdom lost wealth, the cities became more vulnerable to raiders and eventually the capital city was abandoned as people moved into stronger kingdoms. The southern region of the kingdom was still connected to overland trade routes with the Arabic kingdoms, but they never had quite the same power.

According to local legends, a Jewish queen finally defeated the last Axum cities in the late 10th century, bringing an end to the kingdom. Scientists have also identified signs of climate shift around this time, leading to the decline of once-abundant resources, soil erosion, and drought.

If you had asked anybody in the first centuries CE about the Kingdom of Axum, they would have known exactly what you were talking about. Axum was a powerful kingdom in ancient Africa, near modern-day Ethiopia. From roughly 100-940 CE, it was a major economic center that mediated trade between Europe and India.

Axum was a trading nation, meaning that its economy was almost entirely dependent on export and the international economy. Axum was perfectly located between the Mediterranean, Red, and Arabian Seas, so when new sailing techniques emerged that made maritime trade easier, Axum thrived. At their height, they covered almost a million square miles of territory around Northern Africa and the Arabian Peninsula.

Eventually, the rise of powerful Islamic states in the 7th century spelled the end of the Kingdom of Axum. Although the Christian Axum managed to maintain good relations with the Islamic kingdoms, these new powers started to dominate the market of international trade and soon controlled the most important ports. Cut off from their main source of wealth, Axum fell into decline. By the 10th century, invading kingdoms and climate change formally dissolved the Kingdom of Axum. It may not be a name that many of us are familiar with today, but to the people of the ancient world, Axum was something worth remembering.

Assess your ability to do the following things when this video lesson ends:

Create an account
The Rise & Fall of the Axum Kingdom in Africa
Start today. Try it now
History / World History I
World History I

What Is the Kush Civilization?

The Age of Meroe & its Achievements

The Kush & Axum Civilizations on the Swahili Coast: Development & Interactions

The Kushite Conquest of Egypt

Frankish History: Clovis and the Merovingians