Governments often take a secondary role in a market economy, imposing minor regulations to support their interests. Explore the role of government on the economy related to environmental protection, consumer and property rights, and public services. Updated: 11/10/2021
Create an account

A market economy is a system in which the supply and demand for goods and services plays a primary role in a competitive marketplace. In your own life, you can see the market economy at work when you look at prices. For example, when you go to buy a banana, the price has a lot to do with how many people want to buy bananas, and how many bananas are available.

In this lesson, we'll consider what role the government can play in this form of economy. Note that there is a great deal of disagreement among politicians about just how much influence government should have in market economies. We'll use this lesson to cover the basic concepts, not the detailed controversies. 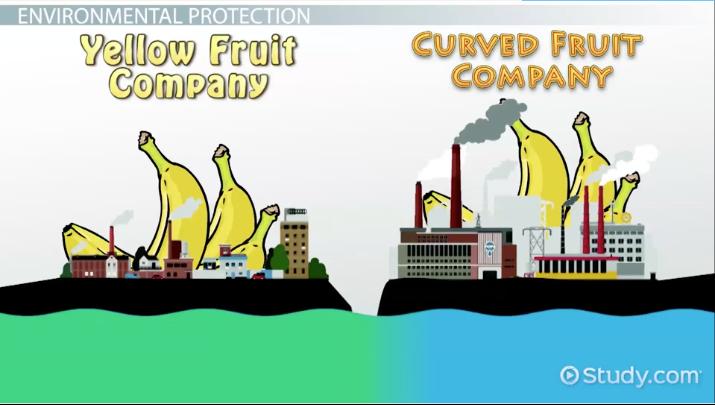 Coming up next: Government Fiscal Policies: Goals and Influence

A market economy with no government intervention also has the potential to trample on some of the rights we usually take for granted. For instance, have you ever seen the price of gas suddenly shoot up sky-high during a natural disaster? At times like these, certain businesses take advantage of an emergency situation by price gouging, or Inflating the price of a needed good to turn a profit. Not all price increases are considered price gouging, but when the issue does arise, the government may step in to protect consumers. In addition, when one company grows so large that it controls an entire market for a product or service, the government may also take steps to prevent a monopoly, which is when one company controls the supply (and thus profit) of a particular type of product or service, and restore competition back to the industry.

One of the central elements of a market economy is the right to own and use private property, or ownership by non-governmental bodies. Yet, private property is more than just buildings and land. If the Curved Fruit Company comes up with a way to protect their bananas from bruising during transport, they may pursue a patent to protect their discovery. A patent is an exclusive, legal right to a new invention or process, usually for a specific period of time, which prevents others from reproducing, selling or otherwise exploiting the product or process.

Sometimes private business cannot provide everything that society needs, so government may take the lead when it comes to building roads or overseeing public school systems. Government programs may also be used to protect individuals from living in poverty, such as offering unemployment compensation after a job loss or providing food assistance to families at risk. Businesses still have their rights to conduct business when there are challenges to national security, yet the government may sometimes restrict certain actions. For example, the Yellow Fruit Company may not be allowed to do business with a nation that represents an enemy.

A market economy is a system in which the supply and demand for goods and services plays a primary role in a competitive marketplace. There is a lot of debate about how much the government should interfere in the economy. However, the government does play a role in certain areas, such as those related to consumer rights, environmental protection and property rights, like those of private property (or ownership by non-governmental bodies) and of patents (which are exclusive, legal rights to new inventions or processes, usually for a specific period of time, which prevents others from reproducing, selling, or otherwise exploiting the products or processes).

The government may also ensure national security by not allowing businesses to transact with enemy countries and providing services that are not typically handled by private business. While not all interested parties agree on how much government should intervene in the economy, sometimes government does need to step in to prevent a monopoly (when one company controls the supply,and thus profit, of a particular type of product or service) or price gouging (inflating the price of a needed good to turn a profit).

The Role of Government in a Market Economy
Related Study Materials

What Are the Economic Functions of Government?

How the Government Protects the U.S. Economy

Governmental Regulation & Deregulation of the Economy

The United States' Market Economy Impact on Its Regions

Roles of Consumers & Producers in a Resource Market

Public Goods Overview & Examples | What is a Public Good?