Dr. Nathan Hurwitz is a tenured Associate Professor in Theatre and has three books in print, two textbooks and a coffee table book.

Look at any great silent film. What makes Charlie Chaplin, Buster Keaton, Mary Pickford, or Douglas Fairbanks so expressive? There's no voice, no sound, except perhaps for a musical score dubbed into the movie long after it was originally released. Seeing their body movements and facial expressions, however, communicates everything to us. Perhaps the most important tool of expression in any actor's toolkit is their physicality, the use of their bodies in movement.

Throughout the history of theatre, actors have used different movement types to complete their communication. Sometimes you can tell what a character is thinking without them speaking a word, and sometimes you know that the words a character is speaking are not true by the way they move or hold themselves. 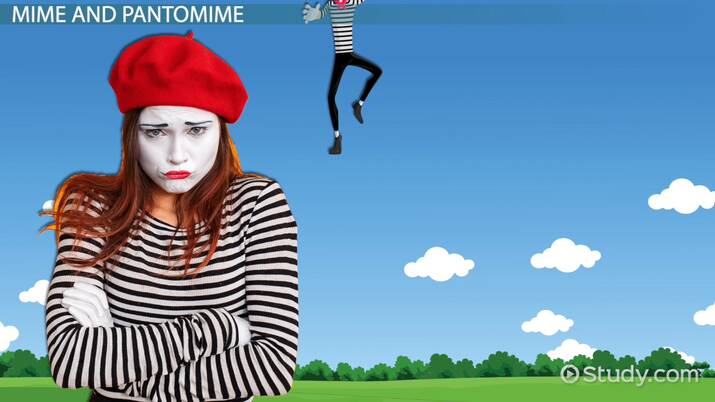 The theatrical forms of mime and pantomime are often confused. They actually spring from the same source, a highly gestural form of ancient Roman theatre. Mime, as practiced today, is a completely physical, non-verbal performance style. In mime, actors represent circumstances (such as walking against the wind or being trapped in a box), an activity (such as peeling a banana or trying to hold a rising balloon), or an emotion (such as sadness or joy) using only facial expression and gestural movement.

Pantomime, however, is a theatrical form in which a single dramatic or comic story is performed by a troupe of actors who speak, sing, and use an exaggerated movement style. Contemporary pantomime is primarily performed as family entertainment in England and is most often associated with Christmas pantomime. These are frequently retellings of beloved children's stories such as Puss in Boots or Peter Pan.

Modern mime began as a stationary art form, using the body to imitate statues and other works of art. Étienne Decroux began a form of mime called corporeal mime, in which the body and body movements are considered the primary source of storytelling, rather than just an adjunct to words and speech.

Slapstick is a form of choreographed roughhouse physical comedy. One of the most familiar slapstick actors is The Three Stooges, with all of their hitting, punching, smacking, falling, and tumbling. While it traces its roots back to Italian ''Commedia del' Arte,'' contemporary slapstick came of age in vaudeville. Vaudeville acts needed to hold an audience's attention, and so many comedy acts chose this particularly movement-oriented form of comedy. Historically, slapstick has been accompanied by sound effects. It gets its name from the two hinged pieces of wood that would be smacked together to accentuate the sound of a person slapping another.

Physical theatre is a form of performance including spoken or sung text, but the primary means of telling the story is physical. This can take the form of story-driven dance, clowning, and mime. One leading school of physical theatre today is L'École Internationale de Théâtre, founded by Jacques Lecoq in 1956. Most mime is physical theatre, as is dance theatre, in such shows as choreographer Twyla Tharp's Moving Out, a musical with dancing to the songs of Billy Joel that are used to tell the story of the characters, or the ballet, The Nutcracker.

Now let's take a look at a few of the most well-known, innovative, movement-based theatre artists. This short list only begins to scratch the surface of this fascinating area of theatrical performance.

Rudolf von Laban (1879-1958) developed a form of dance and movement notation known as Labanotation. Additionally, his work in being able to break down movement into isolated and repeatable component parts paved the way for most of the innovation in the fields of dance, dance notation, and movement study that followed.

Born in 1939, Tadashi Suzuki developed an acting method that emphasizes the importance of the actor's body over spoken text. Suzuki's training and exercises attempt to disrupt and disorient the actors breathing, and center of gravity, in order to heighten the actor's body awareness. His methods are fully explained in his book, The Ways of Acting.

Pina Bausch (1940-2009) was a German ballet director and dance teacher who evolved a form of movement theatre based on her ballet and dance training. Her dance-based theatre work was avant-garde, representing the cutting edge. In her 1978 dance-theatre piece Café Müller, which featured dancers stumbling around the stage crashing into tables and chairs, Bausch required her dancers to perform with their eyes closed.

In 1975, Loyd Williamson founded a conservatory named the Actors Movement Studio. Williamson's basic principle is, ''an actor's every moment must occur in the entire inner physical life of the actor's body.'' Williamson strictly teaches actors how to use the body and voice. Whereas many traditional acting styles suggest that acting is reacting, Williamson contends that acting is interacting.

Movement has been an essential part of acting as long as there has been theatre. Mime is a non-verbal performance style that uses movement, gestures, and facial expressions.Pantomime comes from the same roots as mime but includes singing, dancing, and highly exaggerated physicality, usually in the retelling of a beloved children's story. Slapstick is a form of choreographed, roughhouse physical comedy and it's an outgrowth of ''Commedia del' Arte'' in which comedians roughhouse with each other in the style of the Three Stooges. Physical Theatre is a theatrical form in which the primary means of telling the story is the actors' physicality.

Of the innovative movement-based theatre artists, Rudolf von Laban was the first to break movement down into its component parts and notate it, paving the way for all who came after him. Tadashi Suzuki developed an acting method that stresses the actor's body over spoken text. Pina Bausch created an avant-garde form of movement theatre from her ballet roots. Loyd Williamson founded the Actors Movement Studio in 1975.

The Role of Movement & Dance in Theatre
Related Study Materials

The Role of Music in Theatre

Reading & Interpreting Dialogue from a Script or Play