Ribosomes live on the endoplasmic reticulum surrounding the nucleus and are key in the process of polypeptide assembly. This is essential for genetic translation because amino acid chains are linked together by peptide bonds. Explore the structure of ribosomes and how peptide bonds are formed. Updated: 08/18/2021
Create an account

So far, we've had a lot of practice with the process of translation. It's the second step in the central dogma, which involves converting the genetic code in mRNA into a chain of amino acids. During translation, tRNA molecules first match up with the amino acids that fit their attachment sites. Then, they attach to the mRNA strand by matching their anticodons to the mRNA codons. We know that amino acids are assembled in the correct order because of good codon recognition. But, how do we begin polypeptide assembly? Do the amino acids just magically bond together? How do we make sure we get the tRNA, the mRNA, and the amino acids all in the same place at the same time?

You may recall a tiny structure in the cell called a ribosome. Ribosomes are the little 'dots' that live on the rough endoplasmic reticulum surrounding the nucleus of a cell. They are very important organelles that make polypeptide assembly possible. In this lesson, we're going to focus on the ribosome and the role it plays in helping to begin genetic translation. 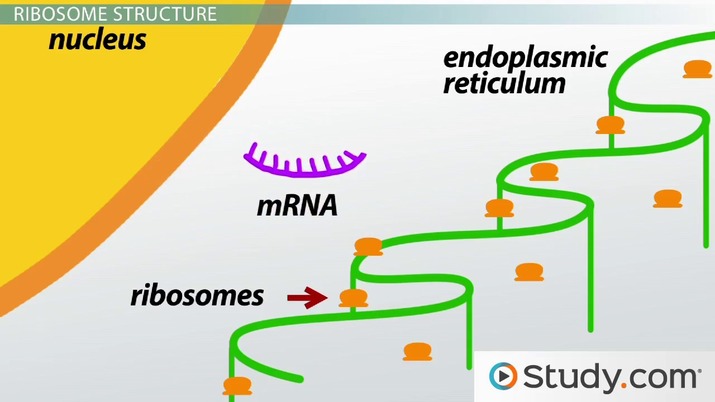 Try it now
Back
Coming up next: Translation of mRNA to Protein: Initiation, Elongation & Termination Steps

Translation is easier to understand when you think of it like following a recipe for your favorite dish. The mRNA strand is like the recipe because it contains all the instructions for making a product. mRNA is the type of RNA that encodes the genetic information found in DNA. When mRNA leaves the nucleus, it first goes looking for a tiny structure called a ribosome. This will be the actual site of translation.

You might recall that a ribosome is a cell organelle that helps in assembling chains of amino acids. It's made of ribosomal RNA, or rRNA, and protein. Ribosomes are located on the rough endoplasmic reticulum, or RER, that surrounds a cell's nucleus. In fact, ribosomes are the reason that the RER is called 'rough;' they give the endoplasmic reticulum a rough appearance when viewed under a microscope.

The ingredients for our protein product are going to be the amino acids. You may recall that amino acids are the organic molecules that serve as the monomers for proteins. There are 20 different amino acids to choose from, and their exact combinations are unique to every protein, so it's crucial that we put the amino acids in the correct order.

We've got a lot of new terms and molecules floating around here. So, let's look at how everything fits together. We'll start with the cell. Inside the cell is the nucleus, and surrounding it is the endoplasmic reticulum. We can see dots on the rough ER, which are the ribosomes. They like to sit close to the nucleus because they're waiting for the mRNAs to come out. The mRNA strands result from transcription, which happens inside the nucleus. So, once transcription is done, mRNA comes out, and sitting there waiting are all the ribosomes. The mRNAs link up with the ribosomes in order to start translation.

You can think of the ribosome subunits as sort of sandwiching the mRNA strand. When the subunits come together, we call the whole complex a ribosome. Typically, we'll make the mRNA visible in our drawings so it looks like it's separating the ribosomal subunits. But keep in mind that in reality, the subunits connect all the way around - like a roll of toilet paper. The mRNA is threaded right through the middle of the ribosome.

Next, we're going to need the tRNA molecule. It carries with it an amino acid, and on the bottom of the tRNA is an anticodon. The anticodon is going to match with a codon on the mRNA. So, the tRNA positions itself inside the ribosome in its special spot. The first amino acid hangs out on the tRNA, and the tRNA is connected to the mRNA codon. This is what the beginning of translation actually looks like. As it continues translating, the amino acid chain will grow longer and eventually trail out from the top of the ribosome.

As you're watching these molecules move in and out of the ribosome, don't get too concerned about how it actually works. The ribosome isn't completely solid all the way through. It's got tons of molecules twisting and weaving all through the inside. Think of the ribosome like a ball of yarn. Have you ever tried to wedge your fingers into a ball of yarn? If the string is loose enough, you can sometimes dig your way through to the center. In the same way, a ribosome can allow molecules to find their way to the inside so that translation can occur. Obviously, it's much more complicated than that. But, we're not going to talk about the molecular structure of the ribosome here. Just imagine that, generally, the RNA strands can move in and out of the ribosome whenever they want to.

As translation continues down the mRNA strand, a new amino acid will be added on for every codon. If there were 15 codons in a particular gene, then the polypeptide would be 14 amino acids long - 14 because the last codon is always the 'stop' codon. The links between the amino acids are the peptide bonds. Peptide bonds occur by a process called dehydration synthesis. You've probably heard in earlier lessons that 'synthesis' means the joining of two structures. 'Dehydration' means the removal of water, or just a water molecule. When two amino acids are lined up side by side, one of them gives up a hydrogen molecule, and the other gives up an oxygen and a hydrogen. The two hydrogens and one oxygen form H2O, or water. The water molecule leaves, and the amino acids are stuck together. The bond attaching them, as you know, is a peptide bond.

Genetic translation results in a chain of amino acids, which are linked together by peptide bonds. Translation occurs inside the ribosomes, which are tiny organelles on the rough endoplasmic reticulum. A ribosome is a complex protein made of two subunits. It houses the mRNA and tRNA strands as they work through the process of translation. mRNA codons match to tRNA anticodons. tRNA molecules carry in the amino acids. The peptide bonds that link amino acids are formed by the release of water molecules. A chain of amino acids is also called a polypeptide.

At the end of this lesson, you should be able to:

Vesicle Types, Structure & Function | What is a Vesicle?

Starch vs. Cellulose Structure & Function | Is Cellulose a Starch?

Vesicle Types, Structure & Function | What is a Vesicle?

Starch vs. Cellulose Structure & Function | Is Cellulose a Starch?