Discover how the Punic wars came about as Rome continued to increase in power. Learn about the similarities between Rome and Carthage, a summary of the causes and results of the Punic Wars, and the involvement of generals Hannibal and Scipio Africanus. Updated: 08/12/2021
Create an account

By the mid-third century BCE, the Romans reigned supreme in Italy. They'd squashed the Sabines, vanquished the Volsci, trounced the Etruscans, slaughtered the Samnites, unmanned the Umbrians, messed up the Messapians and even grappled with Greeks. They only stopped fighting because they'd run out of land to conquer. Italy was now entirely under the control of the Roman Republic.

Yet, a threat to Roman supremacy was growing right at their doorstep. Just off the toe of Italy sits the island of Sicily. And, that island was being conquered by another ambitious city-state with its own imperial designs. Just across the Mediterranean, on the shores of Africa, stood Carthage. 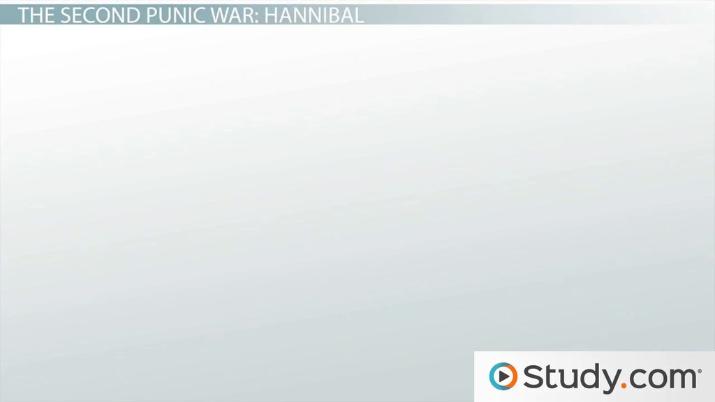 Coming up next: Roman Engineering and Architecture

Rome and Carthage: Similarities and Differences

Carthage is, in many ways, a mirror of Rome. Carthage was founded as a Phoenician Colony around 800 BCE; Rome was founded fewer than 50 years later. As a result of this slight delay, the Carthaginians had a small head start on the Romans, and the fact that theirs was a naval empire while Rome was a land empire gave them a still greater advantage. But, Carthage's greatest advantage was that it was a Phoenician colony trying to unify other Phoenician colonies, with whom they shared a common language and culture. By contrast, the Romans were invaders forced to fight against dozens of independent peoples who all spoke different languages.

By contrast, Rome was the capital of a mere peninsula, albeit a densely populated one. Yet, relative size was not the only difference between the Carthaginians and the Romans. Carthage was a city of traders. They were ruled by a council of merchant princes. They were highly civilized, literate and scientifically advanced, though they also may have engaged in human sacrifice. What's important to know now is that the Carthaginians had built their empire through trade and wealth as much as through force.

By contrast, Rome was a nation of soldiers and farmers. Their republic was run, in many respects, like an oversized military camp. Roman culture was relatively primitive compared to the advanced Carthaginians. They did not have Carthage's wealth or intercontinental trade routes at their disposal. But, what the Romans lacked in money and refinement, they made up for in manpower, strict organization and ferocity. Combining these attributes, the Romans had built their empire through conquest and bloodshed.

In 264 BCE, the ambitious Roman Republic and the wealthy Carthaginian Empire collided on the island of Sicily in the first Punic War. This war was very similar to Athens' battle with Sparta in the Peloponnesian War in that it pitted a powerful army against a large and maneuverable navy. It was a drawn-out, bloody affair, with the Carthaginians trying to keep the battle at sea, and the Romans trying to force the battle to land.

After 24 years of continuous warfare that exhausted both cities, Carthage was driven from Sicily and forced to pay Rome a huge war indemnity, or fine. Bankrupted by the war and the indemnity and unable to pay its mercenaries, the Carthaginian Empire was thrown into a mercenary war. Rome took advantage of the chaos to add the islands of Corsica and Sardinia to its growing Mediterranean empire.

The Romans were once again nervous about the growing power of Carthage, or at least that's what the Roman historians say. Personally, I think that Rome was just looking for a new target for their annual warfare since they'd just finished conquering Illyria across the Adriatic in 219 BCE.

Whatever the reason, in 218 BCE, Rome declared war, and the Second Punic War began. The Roman navy had improved significantly since the beginning of the last Punic War, and they were confident they could hold off any Carthaginian invasion. Yet, while the Romans had been beefing up their navy, the Carthaginians had been building up a huge army in Spain.

Rome was so fixated on rebuffing the Carthaginian navy that it never occurred to them that someone might be crazy enough to march that big Spanish army over the Alps and invade Italy by land. Yet, that is just what the Carthaginian general did.

That general's name was Hannibal, and his military genius made him one of the most fearful figures in Roman history. When Hannibal's army, which included dozens of war elephants, descended from the Alps, he must have felt much like those first Latins had felt looking down on the Italian peninsula a thousand years earlier. Here was a lush land just begging to be conquered. Indeed, had Hannibal not lost his siege engines during his passage through the Alps, he very well might have conquered all of Italy.

Hannibal smashed every army the Romans put in front of him, but without siege equipment, he was unable to take Rome itself. Instead, Hannibal laid waste across the countryside and tried to entice other Italian cities to rebel. For some reason, not one Italian city took up arms against Rome. Perhaps it was loyalty, or perhaps these cities feared Rome more than they feared this invader. Whatever the reason, Hannibal's plan to turn Rome's subjects against it failed. Nevertheless, through his military genius, Hannibal ravaged Italy for 16 years.

You may be wondering - how did Hannibal catch the mighty Romans with their pants down? Shouldn't they have been better prepared? After all, they were the ones who started the war. There are two reasons Rome fared so poorly. I've already mentioned the first problem. No one had expected Hannibal to take his army over the mountains. Rome had been expecting another naval war like the first Punic War, so Roman troops were scattered across numerous islands.

The second problem was that Rome had overextended itself. While Hannibal was ravaging his way across Italy, Philip V of Macedon had taken advantage of the chaos to expand his own kingdom. Philip's invasion of Greece and Illyria prevented the veteran armies Rome had deployed to the east from returning home to reinforce Italy. Unable to bring its full strength to bear against Hannibal, the Romans had to resort to delaying techniques.

Once Philip had been dealt with, some of Rome's best armies were once again available for battle. Rather than running home to oust the invader, the Roman general Scipio brought the fight to Carthage. Scipio invaded Africa, earning him the name Scipio Africanus and, more importantly, cutting off Hannibal's supply lines. Hannibal hurried home with his army and was soundly defeated at the Battle of Zama in 202 BCE. The following year, Carthage surrendered.

The mighty Carthaginian Empire was reduced to little more than the city of Carthage itself, and Rome further burdened Carthage with an even larger war indemnity than for the first Punic War. Meanwhile, Carthage's holdings in Spain were added to the Roman Empire. Rome had also gained territory during their simultaneous war with Philip V of Macedon and gained a foothold in Africa by establishing Numidia as a client state.

Things were looking pretty good for Rome and pretty terrible for Carthage. In a single lifetime, little more than 60 years, Rome and Carthage had reversed positions. Rome was now the dominant force in the western Mediterranean; it had added Carthage's European territory to the empire and extended its reach eastward. By contrast, Carthage was now the underdog, allowed to live only because the Romans could get more money out of Carthage through Carthage paying the indemnity than they could by pillaging the city.

Fifty years later, Carthage had finally managed to pay off that huge indemnity, meaning that Rome no longer had any interest in keeping them alive. In an act of pure tyranny, Rome demanded that the Carthaginians abandon their city and resettle 10 miles inland. For a trading nation, this was a death sentence. Carthage naturally refused, and Rome descended upon its old nemesis with all its might, besieging the city for two years before it fell at last in 146 BCE.

To review: from 264 to 146 BCE, the Romans fought a series of three wars with the rival state of Carthage. These wars are collectively called the Punic Wars. The first Punic War was over ownership of Sicily. It stretched for 24 years before the Romans were finally victorious. Rome gained the island of Sicily, and Carthage paid a huge fine.

The second Punic War was fought over a perceived threat to Roman power. Carthage had begun colonizing Spain, and Rome responded by declaring war. The Carthaginian general, Hannibal, marched his army from Spain to Italy and laid waste to the Italian countryside for 16 years. Rome only won by bringing the war to Africa under the leadership of Scipio Africanus. Rome gained dominance over the western Mediterranean, and Carthage lost almost all of its territory and received another, even larger fine. The third Punic War brought an end to Carthage. After a three-year siege, Rome burned Carthage to the ground.

Geography of Greece: Lesson for Kids

The Fall of Rome

The Layout and Purpose of the Roman Forum

The Political Structure of the Roman Republic