The roots of the Enlightenment laid the foundation for a highly influential intellectual movement. Learn when and how the Enlightenment began and identify the central themes associated with its formation. Updated: 10/21/2021
Create an account

Enlightenment thinking was revolutionary. Enlightenment philosophers opposed superstition and in many cases, tended to be anti-clerical (which means anti-church). Instead, they embraced reason, logic, and science. Leading figures of the Enlightenment were René Descartes, Voltaire, John Locke, Francis Bacon, and others. Sometimes the Enlightenment is called 'The Age of Enlightenment' or the 'Age of Reason,' but it all refers to the same thing. 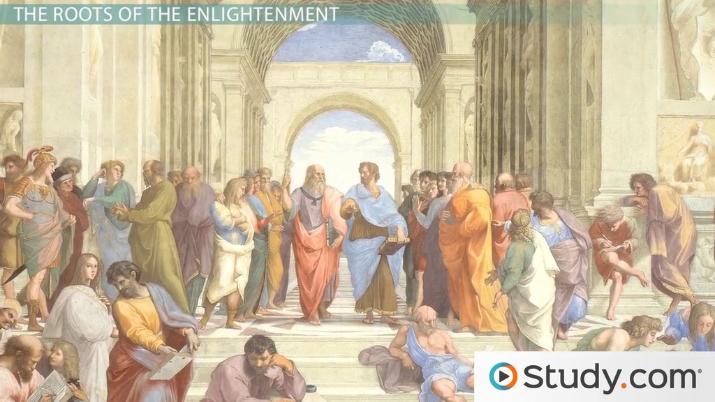 Coming up next: The Enlightenment Thinkers & Their Ideas

The Roots of the Enlightenment

Have you ever seen a very thick rope? You know a thick rope has many different strands. That is kind of how the Enlightenment was: there were many different 'strands' or parts of it. One of the 'strands' was humanism. Humanism, in its simplest form, is a belief system that emphasizes human actions and places great value on human nature. The Enlightenment stressed the ability for human beings to use reason to make society a better place. Many Enlightenment thinkers were progressive in terms of issues of race, sex, class, etc. This means they stressed equality and justice for all.

The Reformation not only weakened the power of the Church but also of European governments, creating greater opportunities for the spread of democracy. Democracy and the rights of individuals were central themes of the Enlightenment. Many historians believe the Enlightenment began in France and then spread throughout the rest of Europe, and eventually to the Americas.

Okay, so here's the bottom line on the roots of the Enlightenment. We can identify three major 'roots' of the Enlightenment: the humanism of the Renaissance, the Scientific Revolution, and the Protestant Reformation. Together these movements created the conditions in Europe for the Enlightenment to take place. Now, let's review the key terms of this lesson:

After this lesson is over you should be able to:

The Roots of the Enlightenment
Related Study Materials

Women During the Enlightenment: Roles & Treatment