Tennessee Williams' award-winning play 'The Rose Tattoo' explores the dynamic relationships in a Sicilian neighborhood in Louisiana. Explore a summary of the play, which won a Tony award in 1951, and the characters as they interact through each of the three acts. Updated: 10/13/2021
Create an account

The Rose Tattoo Act I

Let's start with a quick statement of fact. The Rose Tattoo is a play by Tennessee Williams that won a Tony award in 1951 for Best Play. It's widely considered a classic and centers around the drama and comedy of the lives of characters living in a Sicilian neighborhood in Louisiana.

In the opening scene of The Rose Tattoo, we meet the the character around whom the play revolves, Serafina delle Rose. She's a stereotypical Italian wife and mother: plump and passionate; religious and superstitious. She is deeply in love with her husband, who she sees as very handsome and manly. We also learn that she's pregnant and that she has a twelve-year-old daughter named Rosa.

Rosa is precocious and a beauty. She is older than her years. Serafina's husband, Rosario, appears to be living an upstanding life, but he is actually smuggling illegal goods in his truck. Rosario is an important character in the play, even though he's never seen. He represents deceit and unfaithfulness.

We learn much of this biographical information through a conversation Serafina has with a woman named Assunta. Assunta is a wise woman who's probably Serafina's only friend. When Assunta leaves, Estelle Hohengarten comes by the house. She's looking for Serafina, who's a seamstress, to sew a shirt for her to give to the man she loves. When Serafina isn't looking, Estelle steals a photograph of Rosario, and the audience realizes that she is love with Serafina's husband. As Estelle leaves, the neighbor's goat comes into Serafina's yard, and this upsets Serafina terribly because she believes the woman who owns the goat is a witch. Serafina is convinced that she has given her the evil eye. Now the stage is set for an engaging tale of love, despair, and gossip.

Serafina has been working hard on the shirt for Estelle to give to her lover because Estelle has offered to pay a lot more for it if she can have it in one day. While she is sewing, she hears people gathered outside her door. The women of the neighborhood have learned that the police shot Serafina's husband, and they're trying to figure out who should tell her. Serafina can hear them and falls into deep mourning. 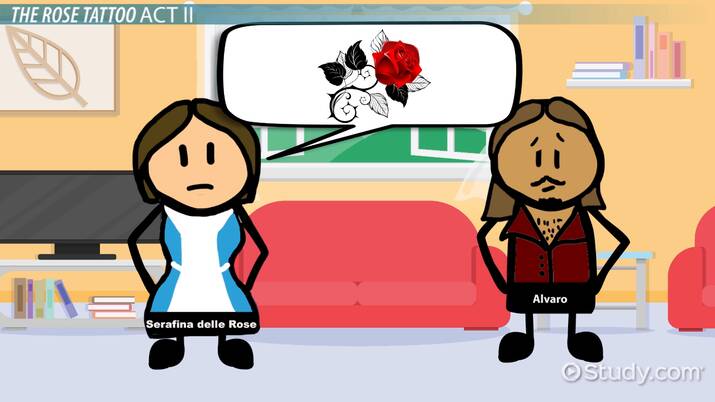 Coming up next: Three Sisters by Chekhov: Summary & Analysis

The priest, Father De Leo, and the doctor are talking, and the priest is trying to convince the doctor that the body shouldn't be cremated. Father De Leo believes that if the ashes are placed in an urn Serafina will worship them rather than moving on with her life. The doctor tells him that it is too late; the body was burned after his truck crashed when the police shot him. The neighborhood women, in an effort to protect Serafina, ban Estelle from the property because they know she was having an affair with Rosario. Serafina loses the baby and falls into a deep depression.

Three years later, it's the day of Rosa's graduation, and Serafina has refused to give her the dress she has made for her big day. The women of the neighborhood are there to get the dresses she has made for their daughters, but she refuses to answer the door when they knock; she doesn't want to give the women their dresses. Rosa has a fit, and scratches her arm, which prompts Serafina to run from the house in a panic thinking that Rosa has tried to commit suicide. A teacher from the high school who had been standing outside offers to help and realizes that Rosa is just trying to scare her mother. She steps in to convince Serafina to give Rosa her dress. Assunta, who is at the house, convinces Serafina to give the women the dresses.

After Rosa leaves, Serafina tries to pull herself together so she can attend the graduation, but she's a mess. The priest's predictions have proven true; she has been wallowing over the loss of her husband for the past three years. While she's trying to get ready, two women, Flora and Bessie, show up to pick up a blouse that Serafina was supposed to make for Flora. The blouse isn't ready, and this causes Flora and Bessie to become comically agitated. Before too long, all three women are angry, and Flora and Bessie begin to fight. In their anger, they tell Serafina that her husband, the man she loved so much, was having an affair right under her nose with Estelle Hohengarten. Serafina knows they are telling the truth.

Rosa returns from the graduation with a young man named Jack Hunter. Rosa has a crush on him. They believe that Serafina is out because the house is dark. Rosa cajoles Jack into kissing her, letting him know that she's attracted to him. Serafina hears them in the house, and comes to see them. She looks disheveled, and Rosa tries to make her look more presentable. She and Jack try to improve her spirits by telling her about the graduation. She learns that Rosa received an award, and that the crowd thought she looked lovely, and that her daughter recited a poem. Serafina is finally more herself.

Serafina begins to question Jack about his intentions toward her daughter. She is worried because he's a sailor, but he's adamant that his intentions are honorable. When Serafina finds out that he is Catholic, she makes him swear to the Virgin Mary that he will honor her daughter.

Serafina wanders around in the garden by herself. Rosa and Jack have left to attend a graduation party. Serafina is lamenting the fact that her husband had an affair. Father De Leo tries to help her by telling her to get her act together and stop this nonsense. She wants him to tell her if he knew Rosario was having an affair, but he refuses. Finally the neighborhood women have to intervene and get her away from the priest.

Serafina prays to the Virgin Mary, asking for a sign. Just as she's praying, a traveling salesman shows up at her door. He's soon accosted by a very handsome Italian truck driver, Alvaro, who's angry that the salesman's reckless driving forced him off the road. The trucker is so angry that he wants to fight, and the salesman's response is to knee him in the groin. Before we know it, Serafina and the truck driver are both crying and lamenting their situations. She notices that his jacket is ripped and offers to sew it for him.

As Serafina and Alvaro talk, she tells him of her husband's death. She looks at him and realizes that he has a beautiful body, like her husband. She tells him about her husband's rose tattoo, and before too long it is clear that they are falling for each other. Alvaro practically asks her to be his partner for life. She tells him to leave and come back when his route is done to pick up his jacket.

When Alvaro comes back, he's cleaned up and looking presentable and has roses and chocolates. He has been to the barber and has rose oil in his hair, something that Serafina's husband used to use. He also tells her that he has a tattoo of a rose on his chest, and Serafina is shocked, but he finally admits that he got it that day. Things are going well until a condom falls out of his pocket, and Serafina gets mad and tells him to leave. He begs her to allow him to stay. Serafina gives in. She tells him that she has just learned that her husband may have been having an affair. Alvaro says he knows Estelle, and he would be happy to call her to see if she will tell him about it. Alvaro gets Estelle to admit the affair, and an angry Serafina throws the urn to the ground and throws herself into Alvaro's arms. She invites him to spend the night.

Rosa and Jack return very early the next morning, and Alvaro, who is half asleep, sees Rosa asleep on the couch. He thinks she is beautiful, but he believes it's a dream. Rosa wakes and screams, and Serafina rushes into the living room. When she sees what has happened she starts screaming that there's an intruder so the neighbors and Rosa won't know she had a man stay the night. Rosa knows better and calms her mother down. Alvaro expresses his love for Serafina, and Rosa tells her mother that she's going to meet Jack before his ship sails. With hesitation, Serafina gives her blessing.

The women of the neighborhood hear all of the commotion, and they can see a bare-chested Alvaro and his rose tattoo. Serafina learns from Assunta that her husband's ashes have flown away. The women are laughing. Serafina doesn't really care all that much because she is happy, and she believes that she has conceived a child. At the end of the play, we see Alvaro and Serafina clearly happy and in love. It's important to note that this kind of happy ending is something that's actually pretty unusual for Tennessee Williams. Nevertheless, it's how the story ends.

Let's take a moment to review what we've learned in this lesson. The Rose Tattoo is a play by Tennessee Williams that won a Tony award in 1951 for Best Play. This is a play that brings drama and comedy to life on the stage through the lives of characters living in a Sicilian neighborhood in Louisiana. The audience is taken through a wide range of emotions from the characters. We laugh, we cry, we're angry, and sometimes we're disappointed, but there is a happy ending. And, while that's typically odd for a Tennessee Williams play, it does help make the entire thing more memorable, if only for that contextually unusual outcome.

A Woman of No Importance: Analysis & Themes

All My Sons By Arthur Miller: Summary & Characters

Dogberry in Much Ado About Nothing: Character Analysis & Purpose