The royal house of Spain currently includes King Felipe VI of the House of Bourbon who holds more of a symbolic, ceremonial role as opposed to a governing role. Explore the Spanish royal family and their history, roles, power, and structure. Updated: 10/21/2021
Create an account

In the United States, when someone talks about 'the royal family,' they are usually referring to Queen Elizabeth II of England and her relatives, such as her grandson and his wife, known in the tabloids as simply 'Will and Kate.' Considering how much attention is lavished on them in the American press, you wouldn't be alone in not knowing that other European countries still have royal families, as well! In this lesson, we'll explore the royal family of Spain, its history, and its current roles. 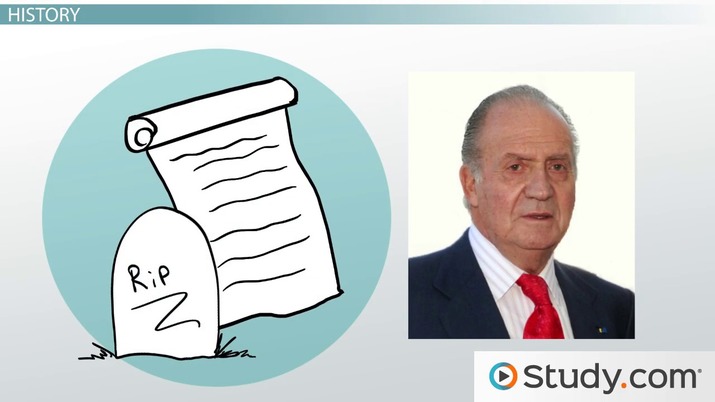 Coming up next: Lower House of Parliament (Congreso) of Spain

The current royal family of Spain is part of the House of Bourbon, an illustrious family name that has technically ruled Spain since Philip V first succeeded to the Spanish throne in 1700 and subsequently fought off other claimants in the War of the Spanish Succession. The actual crown itself changed hands as recently as early 2014, when King Felipe VI of Spain took the throne officially on June 19, 2014. He succeeded his father, Juan Carlos I of Spain, who had ruled since the death of the fascist Spanish dictator, General Francisco Franco, in 1975.

Though Juan Carlos technically ruled before that date, he was not allowed to officially take the throne by Franco's dictatorship. Juan Carlos is still living, despite abdicating in favor of his son. Felipe's wife, Queen Letizia, and two daughters, the Princess of Asturias, Leonor, and the Infanta Sofia, complete the royal family.

As touched on before, the House of Bourbon has ruled over Spain for over three centuries. However, the Spanish crown goes back even further, dating to the 15th century, when the crowns of Castile and Aragon were united by the marriage of Isabella I and Ferdinand II. Later in the century, their combined forces defeated the Muslim rulers in Southern Iberia, forming much of what is today modern Spain.

The Spanish monarchy continued to rule over Spain through the centuries until the 1930s. In 1931, in the midst of political turmoil as the Spanish government tried to turn Spain into a constitutional monarchy, Alfonso XIII abdicated the throne and moved the royal family to Rome. As the political upheaval grew worse, Spain descended into civil war between the socialists and communists who controlled the government and the fascists who controlled much of the army. It was the fascists who prevailed, and General Francisco Franco declared himself 'Regent to the King of Spain,' though in reality he was Spain's unopposed dictator.

When Franco died, King Juan Carlos I succeeded to the throne of Spain, as per Franco's will. However, rather than ruling as the kings of old, Juan Carlos proclaimed his wish for Spain to become a democracy. As such, Spain became a constitutional monarchy, where Parliament maintains the majority of the power to rule and the king and his family are reduced to little more than symbolic figureheads.

Regardless, King Felipe VI and Queen Letizia are still technically the heads of state of Spain. They are recognized by the Spanish Constitution as the official rulers of Spain and have duties which include asking the winning party in an election to form a government and meeting with dignitaries and other visiting royal families who visit Spain.

But in reality, the Spanish royal family serves a largely symbolic role in the Spanish government. They sometimes attend openings, ribbon cuttings, or other public events in an official capacity, though they do far less of these than their British counterparts. More importantly, though, the king and queen of Spain maintain several important philanthropic endeavors. Apart from their own personal causes, the king and queen also patronize various charitable organizations, an important role that helps charities across the country.

Royal patronage raises awareness about certain issues or charities that may have otherwise remained obscure, hence encouraging further patronage. For example, Queen Letizia actively campaigns for increasing the vocational training available to Spanish youth, many of whom are unemployed as a result of the economic turmoil caused by the 2008 financial collapse. In addition, Queen Letizia is an advocate for increased awareness and research on breast cancer and other forms of cancer that disproportionately affect women.

The Spanish royal family, members of the House of Bourbon, has technically ruled over Spain since 1700. Despite a 40-year hiatus where they were unable to rule due to Franco's military dictatorship, the Bourbon monarchy was officially restored in 1975. At that point, King Juan Carlos I made his intentions clear to make Spain a constitutional monarchy, voluntarily reducing his own status from that of effective ruler of Spain to virtual figurehead.

Today's king, King Felipe VI of Spain is reduced to largely ceremonial roles. Though he is technically Spain's head of state, he serves little actual role in governance. The royal family includes Felipe's wife, Letizia, and their two daughters. Together, they have more practical roles in philanthropy, helping to raise the awareness of social issues and fueling charitable donations to good causes across the country.

Once you are done with this lesson, proceed to do the following:

The Crown: The Monarchy of Spain's History, Succession & Regency

What is a Dictatorship? Examples and Characteristics

Sinners In The Hands Of An Angry God by Edwards: Summary, Analysis & Metaphors