Examine the Safavid Empire, centered around modern-day Iran in the 16th and 17th centuries. Explore Persia and the Safavids including the empire's creation, discover characteristics including Shi'ism and theocracy, and review the ruling shahs. Updated: 10/27/2021
Create an account

Once known as Persia, the area encompassing and surrounding modern day Iran has seen many empires rise and fall. One of these empires is the Safavids. Today, we'll take a look at this ruling power that governed over Iran during the 16th and 17th centuries.

According to many historians, the Safavid empire marked the beginning of modern Persia. As an empire, the Safavids succeeded in placing the nomadic people groups of the region under their consolidated power. One of the main ways they did this was through religion. 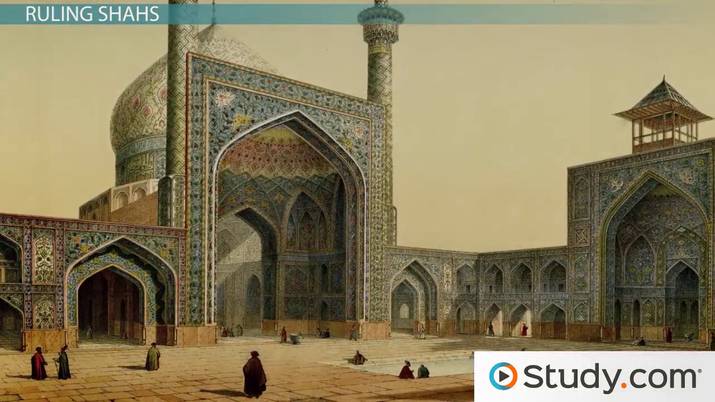 Coming up next: The Mughal Empire: Rulers, Characteristics & Hindu Influence

According to many sources, the Safavid Empire had its beginnings in Sufism, a mystical sect of Islam. However, as time went on, the empire moved closer to Shi'ism, a sect of Islam that believes all religious authority must come through the direct lineage of Ali, the Prophet Muhammad's son-in-law.

Believing that all other religions were heresy, the Safavids used their strong military force to force their Islamic Shi'ism to surrounding areas. In other words, it was definitely not an empire known for its tolerance. On the contrary, many would call it a theocracy, or a government formed and ruled by religious beliefs and rulers. As a theocracy, the Safavid rulers used their religious authority as a means to reign with rather unquestioned supremacy.

Speaking of rulers, Shah Ismail is traditionally considered the first ruler of the Safavid Empire. Maybe a bit like America's George Washington, it was Shah Ismail who freed the Persians from the Ottoman Empire of modern-day Turkey.

Moving further along in Persian history is Shah Abbas the Great. As his name implies, most scholars consider him to be the greatest emperor of the Safavids. Using the power of his theocracy, Shah Abbas strengthened the position of the emperor by limiting the power of the local nobles. In other words, he let everyone know he was the head honcho in charge.

Moving a bit away from politics, Shah Abbas the Great also enlarged the coffers of his empire. Being a bit of an opportunist, he opened up the doors of the empire to trade with Western powers, specifically the British.

As quite the well-rounded ruler, Shah Abbas' rule also saw a flourishing of arts and culture. During his reign, the empire witnessed the building of opulent structures, the publishing of literature, and a great appreciation of poetry.

After his death in 1629, the throne passed to his grandson. Unfortunately, his grandson seemed a bit more interested in partying than responsibility. With this, the empire began to weaken, and in the 18th century, the mighty Safavid Empire succumbed to internal strife and outside invasion.

Persia, the area surrounding and encompassing modern day Iran, was once ruled by the Safavid Empire. This empire governed over Iran during the 16th and 17th centuries. It marked the beginning of modern Persia.

With its origin in Sufism, a mystical sect of Islam, the empire's religion was that of Shi'ism, a sect of Islam that believes all religious authority must come through the direct lineage of Ali, the Prophet Muhammad's son-in-law. With its strong tie to Shi'ism, the empire was considered a theocracy, or a government formed and ruled by religious beliefs and rulers.

Shah Ismail was the first ruler of the Safavid Empire. He freed the Persians from the Ottoman Empire of modern-day Turkey.

As his name denotes, Shah Abbas the Great is considered the greatest emperor of the Safavids. Under his rule, he strengthened the position of the emperor. He also expanded trade, saw the building of opulent architecture, and ruled over a flourishing culture of the arts. Unfortunately, this era of prosperity would come to an end with the empire collapsing during the 18th century.

After this lesson ends, you should be able to:

Suleiman the Magnificent of the Ottoman Empire | Biography & Facts

The Fall of the Abbasids & the Rise of Regional Dynasties

The Rise of the Turks & Their Impact on Islam

Impact of World War I on European Colonies

Unification of Germany Summary & Timeline | When was Germany Unified?