Lauren has taught English at the university level and has a master's degree in literature.

Nathaniel Hawthorne describes his novel 'The Scarlet Letter' as ~'a tale of human frailty and sorrow.~' These frailties and sorrows are many. Among them is revenge. Through the character of Roger Chillingworth, we see its detrimental effects.
Create an account

It's been said that seeking revenge is like drinking poison yourself and waiting for your enemy to die. This holds true in Nathaniel Hawthorne's The Scarlet Letter as we see the detrimental effects of revenge unfold before us. As the story opens, Hester Prynne is made to stand on display with her scarlet letter 'A' as punishment for her crime of adultery. An old man, who calls himself Roger Chillingworth, stands in the crowd of onlookers. We soon learn that Chillingworth is actually Hester's husband, who has been long delayed in his journey. It would surely be a hard thing for Chillingworth to arrive, hoping to be reunited with his wife, only to find she had cheated on him. Sadly, he winds up inflicting more damage on himself before the novel ends. 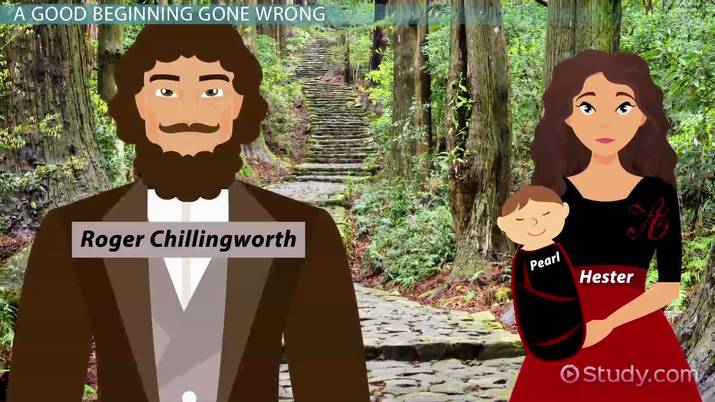 Coming up next: The Scarlet Letter Discussion Questions

Chillingworth starts off on a path of mercy when he opts to retain his pseudonym and, with it, his anonymity. He says to Hester, 'I seek no vengeance, plot no evil against thee,' but we soon learn Chillingworth's attitude toward Hester's lover is not nearly so benevolent. 'I shall seek this man, as I have sought truth in books,' Chillingworth vows to Hester. 'Sooner or later, he must needs be mine!' That doesn't sound like forgiveness! Hester realizes this, saying, 'thy acts are like mercy. . . but thy words interpret thee as a terror!' A 'terror' is exactly what this lust for revenge makes Roger Chillingworth. As the novel progresses, we watch as he's devoured by his own vengeance.

Chillingworth: A Victim of His Own Revenge

While Chillingworth himself believes he 'had begun an investigation. . . with the severe and equal integrity of a judge, desirous only of the truth,' the reality of the situation was much different. As Chillingworth discovers that it is the Reverend Arthur Dimmesdale who has been Hester's lover, we learn that 'a terrible fascination, a kind of fierce. . . necessity seized the old man within its gripe, and never set him free again, until he had done all its bidding.' The desire for revenge completely overtakes Chillingworth, and soon he finds it his master instead of the other way around. He discovers in himself 'a quiet depth of malice' which rises up and usurps his better qualities, leading him 'to imagine a more intimate revenge than any mortal had ever wreaked upon an enemy.'

So consuming is Roger Chillingworth's desire for revenge that it causes a physical change in him. 'Roger Chillingworth's aspect had undergone a remarkable change,' we read, 'there was something ugly and evil in his face.' Later in the novel, it is observed that 'so dark, disturbed, and evil was his look' that people thought it quite possible Roger Chillingworth 'rose up out of some nether region.' By this, it is meant that the people suspect him of being a demon from hell simply because of the look that is always on his face and in his eyes. He allows revenge to take him over so completely that he becomes 'a striking evidence of man's faculty of transforming himself into a devil, if he will only, for a reasonable space of time, undertake a devil's office.' Revenge has consumed Roger Chillingworth from the inside out and it shows now, even in his face.

Chillingworth thought himself on a moral high ground to begin with, but throughout the novel, we see him consumed by revenge until he is the meanest and lowest of sinners. After seven years, Hester Prynne seeks to confront him about the torture he is inflicting upon Dimmesdale. We are told that Hester has 'climbed her way. . . to a higher point' since the initial public shaming for her sin. She has sought to do good in that time. Chillingworth, meanwhile, has devoted himself to causing pain and torment. By so doing, he 'brought himself nearer to her level, or perhaps below it, by the revenge which he had stooped for.' Dimmesdale, too, recognizes the depths to which Chillingworth has fallen when he says, 'that old man's revenge has been blacker than my sin.' Because of his revenge, Chillingworth is brought lower than those whose sins he initially sought to punish.

At the end of the novel, Hester and Dimmesdale find redemption and renewal, while Chillingworth is left only with his own destruction. 'This unhappy man had made the very principle of his life to consist in the pursuit and systematic exercise of revenge,' we read, 'and when, by its completest triumph and consummation, that evil principle was left with no further material to support it, when, in short, there was no more Devil's work on Earth for him to do, it only remained for the unhumanized mortal to betake himself whither his Master would find him tasks enough, and pay him his wages duly.'

Chillingworth's entire existence has been to exact revenge on Dimmesdale. When Dimmesdale confesses his sins and dies, Chillingworth finds himself with no reason left to live. He has been effaced to such an extent that Hawthorne here describes him as 'an unhumanized mortal' and suggests that he's a demon and should go back to Hell where the Devil can keep him properly busy. Accordingly, Chillingworth dies less than a year after Dimmesdale. It's left for the reader to interpret where he might end up after that!

In Nathaniel Hawthorne's The Scarlet Letter, we watch as Roger Chillingworth tragically plays out one portion of this 'tale of human frailty and sorrow.' Chillingworth succumbs to a desire for revenge so thoroughly that it consumes him. He's transformed physically and spiritually, and he allows revenge to become the master of his will. He lives solely to torment Dimmesdale, thus effacing himself below those whom he sought to punish. At the end, when Dimmesdale and Hester find redemption, Chillingworth finds only dissipation and destruction. He has become a shell, with all his better attributes consumed by the cancer of revenge.

Feminism in The Scarlet Letter