Meet two-year-old Ronnie. Ronnie is fascinated by small objects. He will spend hours picking up small items to examine them, and he is learning how to manipulate them in his hands. Why is Ronnie obsessed with this behavior?

One answer to this question may be that he is going through one of the sensitive periods of development. Sensitive periods is a term developed by the Dutch geneticist Hugo de Vries and later used by the Italian educator Maria Montessori. The term refers to several overlapping periods of development where a child is sensitive to a particular stimuli or type of interaction.

According to Montessori, from birth until about the age of six, we seem to learn from our environment without any conscious effort. Young children become skilled at numerous activities without formal instruction. They may not even be aware that they're learning. According to supporters of the idea of sensitive periods, this occurs because it is very easy for children to acquire certain abilities during a specific sensitive period. Also, once a sensitive period is passed, the development of the brain has progressed past the point where that particular ability can be easily absorbed. After this, the ability must be formally taught, it will take a great deal of effort to learn, and will not be as readily acquired by the child. 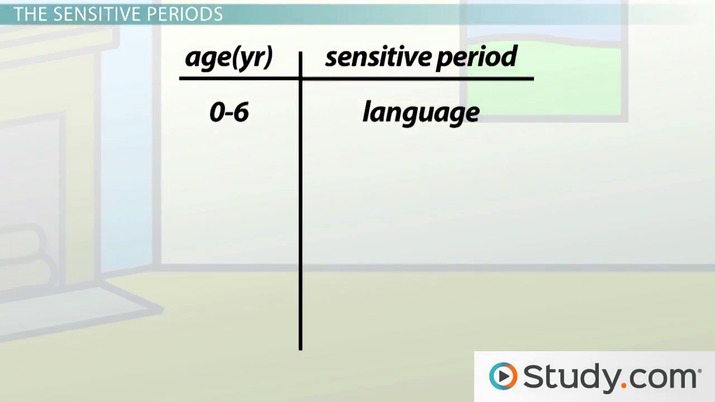 Coming up next: Infant Perceptual Development and the Five Senses

Let's use Ronnie again to illustrate these observable behaviors. Ronnie is clearly engaged in the activity of stringing buttons. The activity begins with a string and some large buttons, which he will continue to add to the string until he has used all of the buttons. He will always choose this activity when it is presented, and he will do it over and over again. If the activity is taken away before he is finished, Ronnie will cry and throw a tantrum. If he completes the activity to his satisfaction, he is always happy and calm afterwards.

The second sensitive period category is order. This period occurs roughly between the ages of one to three years old. During this period a child is learning to draw conclusions and organize information to make sense of the environment. There are four subgroups: spatial order, social order, sensory order, and temporal order. If a child is unable to accomplish these skills during this period, they may later experience difficulty with reasoning and learning.

The third sensitive period category is sensory skills. This period occurs between birth to about four years old. During this period the brain is quickly developing and is taking in information about the world through sensory input. If a child does not take in enough sensory information during this period, they may have difficulty discriminating between what sensory stimuli is important and what is not.

The fifth sensitive period category involves social skills. This period occurs from about thirty months to six years old. At this time, a child begins to notice the social environment. They will begin to observe behavior closely and learn what's expected of them, as well as others, in various situations. Children who are deprived of varied social interactions during this period will be less socially confident and may not handle social situations in an acceptable way.

Sensitive periods are several overlapping periods of development where a child is sensitive to a particular stimuli or type of interaction. The term was developed by a Dutch geneticist named Hugo de Vries and used by the Italian educator Maria Montessori.

Young children seem to learn many different skills without any conscious effort between birth and the age of six. They may not even be aware that they're learning. This ability may exist because it is very easy for a child to learn certain abilities during a specific sensitive period. Once a specific sensitive period is over, it can be much more difficult to learn a skill, and it will require formal teaching.

Sensitive periods are characterized by five observable behaviors. There will be involvement in a clear activity with a beginning, middle, and end. The activity will be irresistible to the child, and they will return to the activity over and over. The child will also develop an emotional attachment to the activity and will appear satisfied when the activity is completed to their liking. For the purpose of this lesson, we kept it simple and described five main categories of sensitive periods that occur between birth and age six. These categories are language, order, sensory skills, motor skills, and social skills.

After watching this lesson, you should be prepared to:

A sensitive period is a time when a child's brain is most receptive to a certain type of stimuli. Once that period has passed, the activity can still be learned although it will not be learned as fully and will take more conscious effort. If parents can stimulate their children during the first six years of life, a sensitive period for many skills, the children's brain will be able to maximally absorb the information. Imagine that you are a psychologist who has been asked to give a talk to teenage mothers, who are at high risk to not fully attend to the needs of their young children. In three to four paragraphs, describe what the sensitive period is, what skills if affects, and how to stimulate those skills maximally. For example, language is a skill that has a sensitive period. Parents should verbalize to their infants and young children very frequently, avoiding electronics in favor of as much conversation as possible.

Imagine that you are a teacher in a preschool classroom. You notice that one of the children, Charlie, does not climb on the playground equipment or go on the swings. He can walk, but he appears clumsy when running, throwing a ball, and jumping. He has been examined by a pediatrician and has no physical abnormalities. Write one to two paragraphs as to why this might be the case, and what you could do about it. For example, it may be that Charlie's parents are extremely protective of him physically, and do not allow him to use his gross motor skills at home. To rectify this, you could introduce Charlie to small gross motor movements at preschool and build on them while he is still in the sensitive period.

Phonogram Overview & Examples | What is a Phonogram?