One approach to understanding abnormal functioning is the sociocultural model. Learn the key components of this model: society's pressures, cultural rules, and expectations about race, gender, and sexual orientation, as well as treatments for abnormal functioning. Updated: 09/18/2021
Create an account

Things are going really well for Richard. As a leader in his field, he has recognition and gets praise regularly. His job is secure, and he is able to map out the career that he really wants. But, there's a problem, Richard has become more and more anxious recently.

He finds it difficult to breathe sometimes and feels like everyone is watching him. Sometimes people approach him at restaurants to compliment him on his work. This has made him feel stressed out whenever he goes out to eat. He has to fight off panic attacks more and more.

Richard is struggling with anxiety disorder, a type of abnormality. His condition would therefore fall under the umbrella of abnormal psychology, which is the study of people who have abnormal thoughts, behaviors and emotions. 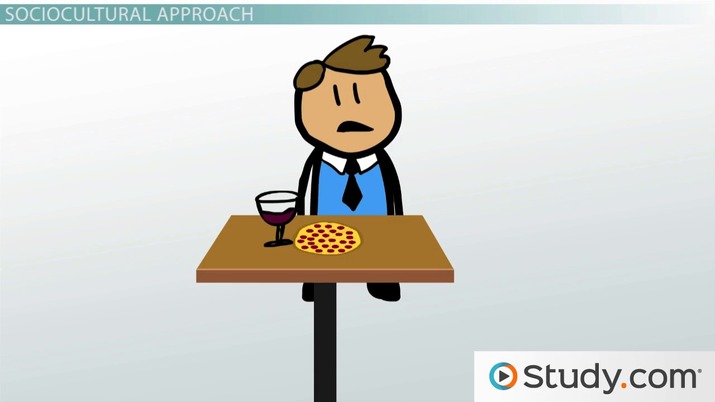 Coming up next: Social Roles and Labeling: Impact on Abnormal Functioning

There are many aspects to society and culture that can play a role in people's behaviors, thoughts and feelings. Let's look at a few key ideas in the sociocultural approach to psychology.

Many people feel the need to live up to what society considers successful. This can mean many things, including making lots of money, becoming famous and even changing aspects of their personalities to fit what society believes is good.

All of these pressures can lead to stress, anxiety and depression, as well as other mental disorders. For example, Richard is doing pretty well by society's standards. However, perhaps his anxiety stems from a fear that he will not live up to society's expectations. Perhaps he feels pressure to become even more accomplished than he already is.

Every culture has its own set of rules about what is acceptable and what isn't. In the United States, throwing a temper tantrum in the middle of a public space is not considered to be good form for adults. Other cultural rules might have to do with what religion you follow, what values shape your behavior and how independent you are.

Remember Richard? Maybe part of his anxiety comes from the cultural rules that dictate how someone in his position should act. Remember that when he's in a public place, like a restaurant, he has to fight off panic attacks. This might be because he worries that people will recognize him and notice if he does something wrong, like gets spinach caught in his teeth.

Your race and gender dictate what 'normal' behavior is, and some people who don't conform to these expectations are ridiculed or even shunned by society. Some stay-at-home dads find that people don't understand why they aren't 'providing' for their families, and some racial minorities face discrimination that can take a large toll on their lives and mental health.

Perhaps part of Richard's anxiety stems from the fact that he is homosexual, and he doesn't feel like society will accept him if he comes out of the closet. Society's expectations about a group you belong to can put a strain on people and sometimes cause them to act in ways that are not normal.

Like many other approaches to abnormal psychology, the sociocultural approach views therapy as a critical piece of treatment. Someone like Richard might work one-on-one with a psychologist to learn strategies to deal with his anxiety.

One additional key component of the sociocultural model is the way it views people as part of a larger unit. Family dynamics are a large part of the sociocultural approach to psychology and so family or couple's therapy is a significant part of many people's treatments. For example, Richard's psychologist might want to meet with Richard and his wife and kids to see how the family dynamics might be adding to his stress and what strategies the family can adopt to help Richard with his anxiety.

Another treatment plan common in the sociocultural model is group therapy. In this type of therapy, people with similar issues meet to talk and support one another. Richard's therapist might encourage him to attend a group therapy session once a week for people with anxiety disorders. Through the support of others suffering from the same issues, Richard might be able to find the strength to fight his anxiety.

Abnormal psychology is the study of abnormal thoughts, behaviors and feelings. There are many ways to approach abnormal psychology, including the sociocultural approach, which looks at the influence of society and culture on a person's mental health. Key components of the sociocultural approach include societal pressures, cultural rules and expectations about race, gender and sexual orientation. Treatment involves therapy, including family and group therapy.

The Cognitive Model in Psychology and Abnormal Functioning

The Behavioral Model and Abnormal Functioning