Rupert Brooke's 'The Soldier' is a patriotic sonnet written before the poet's death in World War I. Explore a summary of the poem, analyze why Brooke used the form of the sonnet, and discover the context of the soldier behind the poetry. Updated: 10/17/2021
Create an account

'The Soldier' by Rupert Brooke

Written during the early days of World War I, Rupert Brooke's 'The Soldier', also known as 'Nineteen-Fourteen: The Soldier,' is an expression of patriotism and loss felt by many as a result of the Great War. Since it's a sonnet, Brooke's poem isn't very lengthy, but as you'll see in a moment, it's long enough to convey some very touching and inspiring sentiments.

If I should die, think only this of me:
That there's some corner of a foreign field
That is for ever England. There shall be
In that rich earth a richer dust concealed;
A dust whom England bore, shaped, made aware,
Gave, once, her flowers to love, her ways to roam,
A body of England's, breathing English air,
Washed by the rivers, blest by suns of home.
And think, this heart, all evil shed away,
A pulse in the eternal mind, no less
Gives somewhere back the thoughts by England given;
Her sights and sounds; dreams happy as her day;
And laughter, learnt of friends; and gentleness,
In hearts at peace, under an English heaven. 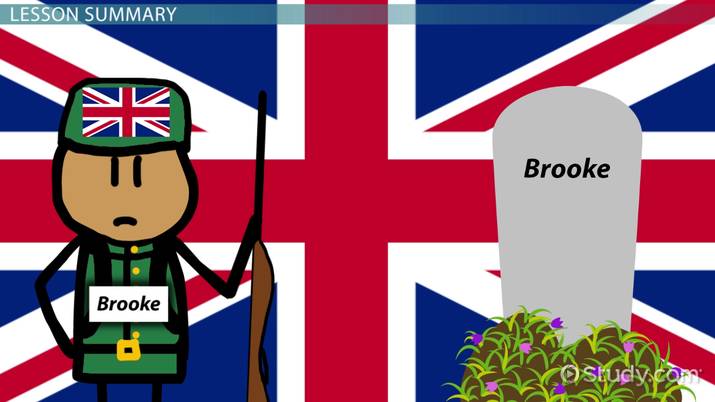 Try it now
Back
Coming up next: The Wreck of the Deutschland: Summary & Analysis

You've most likely heard the phrase 'Home is where the heart is.' But you've probably never heard someone express the sentiment quite as literally as Brooke did in 'The Soldier.' In his sonnet, the poet ties his entire being, physical and mental, to England, making the two practically inseparable even in death.

Many of us are familiar with the concept of 'Ashes to ashes; dust to dust.' This expresses the Judeo-Christian idea that since we're formed from the dust of the Earth, we're bound to return to it in death. In Brooke's thinking, then, since he was 'A dust whom England bore…' his final resting place even in 'some corner of a foreign field' would be 'for ever England.'

Of course, it's not just his physical 'body of England's' that carries with it the presence of the poet's homeland. Brooke asserts that even 'the thoughts by England given' would linger long after his death and recall the many cherished 'sights and sounds' of home. And whether we believe in any notion of the afterlife or not, it's evident from the poem's continued existence that Brooke and the England of his day have achieved some level of immortality.

In the minds of many writers, their art is their surest way to immortality, and often this means participating in a literary tradition that's already been immortalized. For Brooke, this meant 'The Soldier' and other poems in his sonnet cycle by the same name already had a leg-up by being written in the tradition of Shakespeare, Spenser, and countless others who've made the sonnet such a timeless staple of English poetry.

For his own work not to fade into all the rest though, Brooke had to set his sonnets apart in some way. He does that in 'The Soldier' by slightly altering the rhyme scheme favored by Shakespeare. For instance, he follows the pattern ababcdcd efgefg. This line configuration allows him to separate the sonnet into two sections, an octave (8 lines) and a sestet (6), much in the way Edmund Spenser and others traditionally divided their sonnets. And as we can see in 'The Soldier,' dividing the sonnet this way helps the poet examine two different viewpoints, as Brooke does when he looks more at the physical ties to England in the beginning octave and at the more mental ones in the closing sestet.

For Brooke, 'The Soldier' wasn't merely a poetic exercise in hypothetical scenarios. Having enlisted in the Royal Naval Division of the British infantry at the outset of World War I, the prospect of death in service to England was all too real in his case. And this makes his poem an even more poignant expression of just how intertwined their fates really were during this tumultuous period in world history.

In fact, Rupert Brooke died on April 23, 1915, during service with the Royal Naval Division; coincidentally, not too long after his sonnets featuring 'The Soldier' were published. He contracted blood poisoning from a mosquito bite while en route to the famous offensive at Gallipoli in Turkey and was buried on the island of Skyros in the Aegean Sea.

Though it's not his island home in the North Atlantic, if we're to believe Brooke's poem, the Aegean island has since become England, at least to some degree, as long as his 'richer dust (is) concealed' on its shores. However, although England may have gained footing on a 'foreign field,' Brooke's untimely death and his poem forecasting it became symbols of the country's substantial loss of young life and creative minds throughout the course of World War I.

Produced during the early days of World War I, Rupert Brooke's 'The Soldier' is a patriotic sonnet in which the poet demonstrates both his physical as well as mental ties to his homeland. While taking part in the well-established English sonnet tradition, Brooke also sets 'The Soldier' apart by using his ababcdcd efgefg rhyme scheme, making it easier to divide the poem into an opening octave (8 lines) and closing sestet (6 lines), in which the different types of connections to England can be examined. Brooke's ultimate bond to England, though, came on April 23, 1915 when he died from blood poisoning as a result of a mosquito bite while enlisted with the Royal Naval Division of the British Army on its way to the famous battle of Gallipoli.

To the Lighthouse by Virginia Woolf | Summary, Style & Analysis

The Charge of the Light Brigade by Alfred, Lord Tennyson | Summary & Analysis

To the Lighthouse by Virginia Woolf | Summary, Style & Analysis

The Charge of the Light Brigade by Alfred, Lord Tennyson | Summary & Analysis