The Spanish Constitution, similar to the U.S. Constitution, outlines their ~'recipe~' for enacting governmental structure and citizen rights. Follow the history of its relatively recent inception and the key topics that were developed since the 1970s. Updated: 10/20/2021
Create an account

Most things you do have directions. For example, most board games have rule books, and most dishes have a recipe for you to follow. For many national governments, the governing recipe often starts with a constitution. Usually a document or series of documents establishing the basic structure and laws of a country's government and the rights its citizens enjoy, constitutions are used as the founding documents of many Western countries. Spain is no different, though its own constitution was written less than 40 years ago, in 1978. In this lesson, we will explore the history and contents of Spain's Constitution. 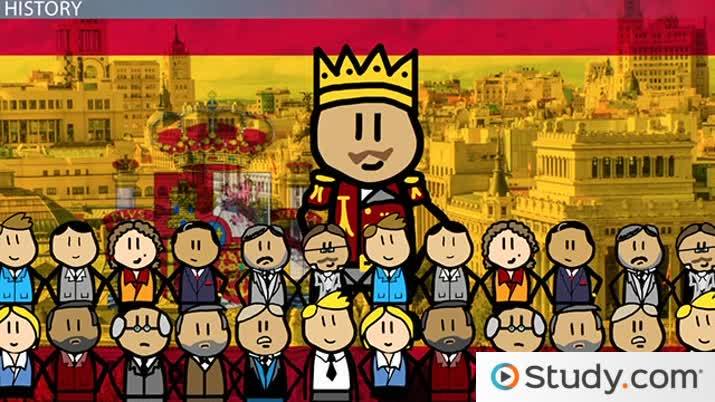 Coming up next: The Spanish Magna Carta & the Constitutional & Functioning Laws

That Spain would write a constitution or become a relatively democratic state in the 1970s was no sure thing. Though incremental moves toward a democratic system were made in the 19th century, in the early 20th century Spain was still technically a centralized monarchy ruled by the king. In the midst of political turmoil in the early 1930s, Spain's King Alfonso XIII abdicated the throne and declared Spain a republic in 1931. Unfortunately, the republic's rule quickly dissolved, and the country fell into a civil war.

In 1937, the Spanish Civil War ended with the triumph of General Francisco Franco, who soon installed a fascist dictatorship with himself as its head. When he died in 1975, he instructed that Juan Carlos de Borbon, Alfonso XIII's grandson, should resume the monarchy. Juan Carlos, however, had other ideas. Soon after Franco's death, the newly coronated king of Spain declared Spain a constitutional monarchy and ordered a constitution to govern the people of Spain and the new government's institutions to be drawn up.

The Constitution was written after elections took place in Spain. For the first time since the rise of Franco's dictatorship, Spain held democratic elections in 1977 for its traditional representative body, the Cortes. After the body met, the 36-member Committee of Constitutional Affairs appointed seven delegates to draft the Constitution. The Constitution was drafted over several months, and after it was finished, it was subject to a protracted debate and political arguments amongst the general Cortes.

For example, even before the Cortes could vote on the Constitution, its members had proposed over 1,000 amendments! Finally, the finished and revised document was put before the Cortes in October 1978, where it passed overwhelmingly. The Constitution was then put to a national referendum, where it passed with 88% of the vote. In December of 1978, the Constitution was ratified by King Juan Carlos I himself, becoming the binding legal basis for the government of Spain.

Writing a constitution for a country like Spain was no easy task. With the exception of the short and tumultuous Spanish republic of the 1930s, Spain had only known authoritarian dictators or monarchs; what legislatures existed were often exclusive bodies with little or no actual power. The writers were essentially starting from scratch. One old institution that the writers did keep was the king.

The Spanish Constitution declares Spain to be a constitutional monarchy, where the king is the official head of state and the symbol of the country. It also establishes Spain as a democratic country where the real political power rests in the hands of the people, who together elect a bicameral representative body, a legislative branch of government with two houses. The longest section of the Spanish Constitution by far is that which sets out the rights and freedoms enjoyed by all Spaniards. After decades of political and social repression under Franco's authoritarian regime, it's no surprise that the framers of the 1978 Constitution expounded the basic rights of Spaniards so forcefully.

Many of these rights are ones that you or I would take for granted, such as protection against unreasonable search and seizure, the presumption of innocence until proven guilty for all suspects of crimes, and the right to due process of law. All races, religions, and ethnicities are seen as equal by the Spanish Constitution. However, the Constitution also goes further than our own, guaranteeing some rights for trade unions and guaranteeing an old-age pension for all Spaniards.

Significantly, two institutions which get far less rights in the Spanish Constitution are the armed forces and the Roman Catholic Church. Most Spaniards are Roman Catholic and, therefore, the Church has a long history of influence in Spain. Similarly, the Spanish armed forces essentially ruled the country under Franco's dictatorship. The 1978 Constitution sought to lessen the influence of both of these bodies on the institutions of the new Spanish government.

Finally, the Spanish Constitution also decentralized the Spanish government to a greater degree. After decades of authoritarian centrism under Franco, the Spanish Constitution tried to recognize the disparate ethnic and linguistic groups which exist in Spain, from the Basques to the Catalans. Though extremists were ultimately unhappy - a root of today's separatist movements in Spain - the Constitution allowed for limited regional autonomy and the use of regional languages and social customs which were persecuted and attacked by the Franco regime.

Spain's Constitution has been the basis of the country since it was written and ratified in 1978. After centuries of authoritarian monarchy and subsequent decades of military dictatorship, the Spanish King Juan Carlos I succeeded in turning his country into a constitutional monarchy. Spain's Constitution was written by seven members of Spain's representative body, the Cortes, and voted on by the nation and signed by the king.

It establishes Spain as a democratic constitutional monarchy with the king as the official head of state, though he has little real power. It also establishes a wide range of basic rights and liberties for Spaniards, from freedom of speech and protection against unreasonable searches to guarantees of an old-age pension. The Constitution also limits the power of the Catholic Church and the army - two traditionally powerful entities in Spain - and grants Spain's disparate regions and ethnic groups more autonomy than they enjoyed previously.

Heads of Spanish Government: The Spanish President & Council of Ministers

The Spanish Golden Age: Growth of Power & the Arts