Copyright
Lesson Transcript
Instructor: Steven Shirley
The title of caliphate is given to the appointed successors to Mohammed, and so it carries significant responsibility and power. Understand the historical significance of the caliphate in the spread of Islam through the Arab world, northern Africa, and Asia. Updated: 10/26/2021
Create an account

After the death of Mohammed, the new religion of Islam was at a crossroads. Having unified the tribes of Arabia and solidified Mecca as the capital of their faith, the followers of Islam were faced with their first leadership crisis. Who would take up the mantle of Mohammed and lead?

The successor to Mohammed, given the title of caliph, was destined to be one of two men. The first man, named Ali, was believed by some to be Mohammed's personal choice. He was a cousin and a son-in-law to the prophet. Yet others believed Abu Bakr had a stronger claim. Abu Bakr, a longtime friend, confidant and father-in-law to Mohammed, had been the first male convert to Islam. Ultimately, it was Abu Bakr who got the nod from the majority of the elders to become the first caliph of Islam.

He would serve in this position for two years until his death in 634 CE. But during those two years, Abu Bakr proved himself an able leader, subduing the entire Arabian Peninsula and converting the population to Islam. What is more, those around Abu Bakr were well-schooled in the arts of war and conflict and understood the importance of strengthening their borders against encroachment from foreign armies and foreign faiths. They also understood the importance of preventing internal dissent. Soon, the armies of Islam would set their sights on expansion beyond Arabia, and two unsuspecting empires would be their choice targets. 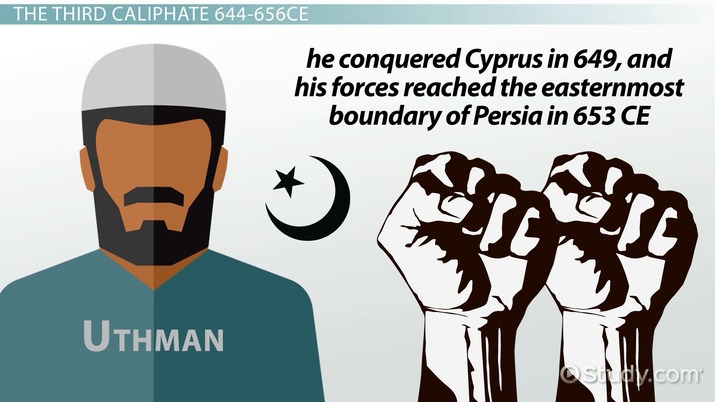 The first was the Sassanid Empire, a wealthy and prosperous kingdom built upon trade and commerce that controlled Persia (modern-day Iran) and Iraq. The Sassanids were inheritors of the great tradition - the tradition of the Parthians, who were master craftsmen, warriors, artists and followers of the Zoroastrian religion.

The second empire was Byzantium, an empire based in Constantinople. They were equally wealthy, prosperous and as culturally rich as the Sassanids, but they were Christians. Byzantium controlled much of the former lands of Romans, including what is now modern-day Palestine, Israel and Syria, as well as extending their power into Egypt.

Believing that both empires posed a threat to Islam, Abu Bakr declared a religious jihad against them. He felt that the expansion of Islam would be key to its survival. These wars were welcomed by true believers as a sign of God's will, a desire to root out the paganism of the Persians and the corrupted Christianity of the Byzantines. Even after Abu Bakr's death, the wars would continue.

The second caliphate (from 634 - 644 CE) was led by Umar, another father-in-law to Mohammed, and was marked by several successful military campaigns against the Byzantine Empire, including the capture of Damascus in the year 635 and the capture of Jerusalem in the year of 637 CE. Once he had conquered these lands, he instituted a modern form of Islamic government, allowing for both Jews and Christians (as well as others) to practice their faith if they paid the jizya (religious tax).

To the east, Umar's forces moved against the Sassanid and captured the capital city of Ctesiphon in 637 CE. Historical records of this time tell us that while the inhabitants of the city were not harmed, their palaces and libraries were burned. As a result, ancient knowledge and countless artifacts were lost forever. Sadly, this marked a disturbing trend in warfare for centuries to come, where priceless works of human culture were burned in the name of religion from Persia to as far east as India.

Muslim armies continued to have success in their war with the Sassanid and Byzantines, eventually capturing Babylon in 641 and the city of Alexandria, Egypt in 642 CE. Much of the Muslim armies' success was due to their internal unity. They were buoyed by their faith, and also, the internal divisions found in both the Sassanid and the Byzantine empires weakened both from the inside. By the time of Umar's death, Islam controlled a swath of territory second only to the Tang Dynasty of China.

Uthman, a member of the influential Umayyad family, was chosen as Umar's successor and served as the third caliph from 644 - 656 CE. In 645, he defeated the Byzantine attempt to recover Alexandria, and in 647, he began to expand the Muslim Empire west of Egypt. He conquered Cyprus in 649, and his forces reached the easternmost boundary of Persia in 653 CE. His accomplishments on the battlefield were mirrored by his promotion of Islam and Arabic culture and, most importantly of all, a unified and definitive version of the Quran, which significantly reduced doctrinal differences among the faithful.

But not all Muslims were happy with this leadership. Many felt Uthman had become too powerful, manipulating religion for his benefit. When Uthman was ultimately assassinated, a civil war erupted, and Ali, Mohammed's cousin and son-in-law, was declared the fourth caliph. Ali would also face immediate opposition, but he managed to maintain control from 656 - 661 CE, when he was assassinated in violence that threatened to tear the Islamic world apart.

From this chaos, the clan of the Umayyad ultimately emerged victorious. They would establish a new caliphate that would last until 750 CE, when another challenger would prove too strong even for them to resist.

The excesses of the Umayyad did not go unnoticed by many in the Islamic world, and challengers were abundant. Yet few had the power to make a real go at ruling. One group that did was the Abbasid clan, so named as they claimed descent from Abbas ibn Abd al-Muttabib, one of the younger nephews of the Prophet Mohammed.

They detested what they perceived to be secularism of the Umayyad and considered them immoral by Islamic standards. The Abbasid also appealed to non-Arab Muslims, who felt they were treated as second-class citizens within the Umayyad Empire.

The Abbasids began launching raids against the Umayyad ruling class - and finally outright war. With the support of the Persians, they were able to defeat and overthrow the Umayyad caliphate, establishing what would become the Abbasid Dynasty.

Known as the Islamic Golden Age, the Baghdad-based Abbasid Dynasty rekindled much of the secular intellectual pursuits that had suffered under previous rulers. Many classic works of philosophy, science and religion were translated from Greek and Persian into Arabic, saving much of the region's ancient knowledge for future generations and helping spur the scientific revolution that would come centuries later.

The Abbasids' empire was vast, but it was also this vastness that made controlling it problematic. What is more, the Umayyads were overthrown but not entirely destroyed, and they fled across the Mediterranean Sea into Muslim-controlled areas of the Iberian Peninsula, establishing themselves in what is now Spain by the year 756 CE.

Other divisions included the breaking away of the Shia sect of Islam, those believing Ali was the true successor of Mohammed. The Abbasids had at first embraced Ali's followers but later disavowed any support towards Ali's legacy and the Shia tradition.

Combined with a continued fight with the Byzantine Empire, Crusaders from Europe and internal rebellions, the Abbasid's power steadily declined. It would meet its ultimate end in the mid-13th century - not at the hands of Christians or Persians, but at the hands of an unbeatable military force: the Mongols. In 1258 CE, Hulagu Khan, grandson of Genghis Khan, attacked Islamic lands and destroyed the Abbasid capital of Baghdad. The last reigning Abbasid caliphate was executed on February 20 of the same year.

Islam would of course survive the Mongol onslaught, but the Abbasid dynasty would not. In its place, a fragmented Islamic world would emerge, and fragmented it would stay for the next 300 years, until once more it was unified under the Ottoman Empire of the 16th century.

Islam's journey from the sandy trails of Mecca to becoming the second-largest religion in the world was one of epic turmoil, passion, power and determination. While it did oversee destruction of ancient cultures, part of its legacy was the creation of a new unified Arab identity and the construction of fabulous wonders across the Arab world, from Jerusalem to Mecca and beyond.

By the end of the 14th century, Islam had not only established itself in the Arab world, but it also spread to Persia, Europe, Africa and India. From there, it would make the jump over land and sea to Southeast Asia and China, all the while expanding, growing and gaining momentum.

The religion of the Prophet Mohammed had grown to inspire many to do great things and converted millions with its simple message of piety and of dedication to their God, Allah. The world would never be the same.

Upon finishing this lesson, you should be able to track expansion and the spread of Islam through the various caliphates.

Justinian's Code of Law and Roman Emperors After Constantine

Umayyad Caliphate Leaders & Warfare | What was the Umayyad Dynasty?

Government Overview, Purpose & Types | What is a Government?

Justinian's Code of Law and Roman Emperors After Constantine

Umayyad Caliphate Leaders & Warfare | What was the Umayyad Dynasty?

Government Overview, Purpose & Types | What is a Government?