Animal herds and farms are probably very familiar to anyone who has grown up in or driven through rural areas. So often do we pass by field after field and herd after herd that they barely even register with us anymore. But 12,000 years ago, having a herd of animals would have been an incredibly novel thing; not only in rural America, but across the entire globe. In this lesson, we will explore the first instances of pastoralism and agriculture in Africa and discuss these practices' spread throughout the continent. 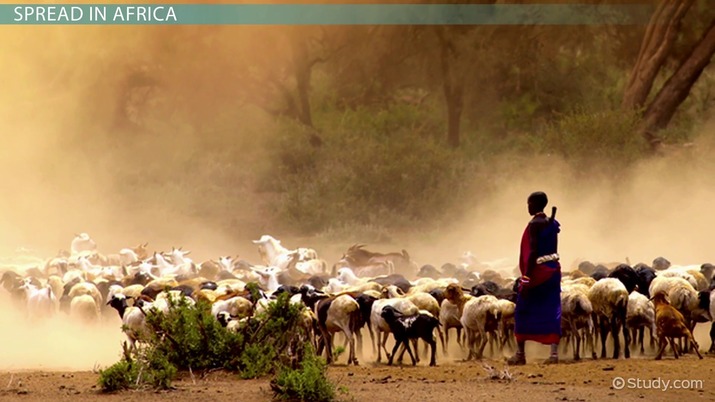 Try it now
Back
Coming up next: Ancient West Africa: Bantu Migrations & the Stateless Society

First off, we should probably explain exactly what pastoralism and agriculture are. Pastoralism is a way of life characterized by the herding of animals. These animals were domesticated centuries ago by early human civilizations, and are generally large herbivores that can provide milk and/or large amounts of meat. For example, cattle are preferred in many parts of the world today, such as North America and in parts of Africa, while the preferred animal in the Middle East is often goat or sheep. In other areas, it can be any large animal from horses to camels to reindeer.

People in pastoral communities often live semi-nomadic lives. They build shelters, but they are often rudimentary and easily movable. This is necessary because, as the herds of animals exhaust the grazing land and resources of a particular area, they are forced to move to new lands and hence, do not stay in the same area for too long. Many pastoral societies move in cycles, giving the land a certain amount of time to regrow and replenish its nutrients before allowing their animals to graze there again. As you might guess, the diets of these communities are heavily dependent on meat and other animal products like dairy.

Agriculture differs from pastoralism in many ways and in human history, it was often developed after pastoralism. Rather than living a semi-nomadic life herding animals, agriculturalists instead live more sedentary lifestyles and plant large quantities of domesticated plants. The earliest domesticated crops were likely wheat, barley, and millet, while today that quantity has grown to include all of the diverse fruits, vegetables, and grains that you can buy simply by going to the grocery store!

Having a food source that stayed in one location for the entire year allowed humans to settle down and stop moving from location to location. Using agriculture, humans can stay in place and build permanent settlements, which lead to villages, towns, and cities. In addition, agriculture generally creates a surplus of food for communities, which can be stored and eaten later. It also gives humans more free time to develop pursuits not connected with meeting basic living requirements - in other words, culture and the development of civilization.

Both of these lifestyles were incredibly important in the history of humanity and in the development of the modern world, and Africa is no different. As mentioned above, pastoralism often predated the beginning of agriculture in human societies throughout the world, and the same is true in Africa. Though the exact date for the beginning of pastoral society in Africa is highly disputed, the earliest bones of domesticated cattle have been found in the Nile River Delta, in Egypt, dating to the 10th millennium B.C.E. However, other historians claim that these early bones are from wild cattle and that pastoralism arrived in North Africa from ancient Mesopotamia in the east sometime in the 8th century B.C.E. It is possible, of course, that both of these things happened, since the DNA signatures of today's cattle in Africa suggest several different sources.

Regardless of the exact beginning, pastoral societies in Africa flourished across the north and through the Sahara region until the Sahara began to become dryer, a process historians estimate began around 5000 or 4500 B.C.E. This forced pastoralist communities south, into central and eastern Africa, spreading the practice. By 2000 B.C.E., the practice had reached the south of Africa and was practiced in some form in all areas of the continent.

Agriculture, on the other hand, historians believe almost certainly arrived in Africa from civilizations in the Middle East. Indeed, both iron tools and agriculture appeared to arrive in Africa at about the same time, and both exhibit similarities to the same tools and practices pioneered in ancient Mesopotamia. These practices likely made their way to Africa before 3000 B.C.E., though the exact date is not known and some historians push that date as far back as 5000 B.C.E. Early African agriculturalists did not discriminate in their choice of crops; they developed their own types of rice and other crops as well as planting the sorghum, wheat, and millet that were common crops of ancient Mesopotamia. Agricultural practices were likely diffused throughout the continent as a result of people moving away from the drying Sahara, in the same fashion as the spread of pastoral practices discussed earlier.

Pastoralism and agriculture are arguably the two most important practices in the history of humankind; indeed, without the increased food production these lifestyles created, the modern world would simply not be possible. Pastoralism was generally practiced first, and such is the case in Africa. Pastoralism spread throughout Africa from the north, and when the Sahara began to dry and expand, pastoralists pushed southward and spread their practices until the entire continent was touched by some form of pastoralism around 2000 B.C.E. Agriculture began much later, and as with pastoralism, the exact date it began is unknown. Likely agriculture arrived along with iron tools from Mesopotamia sometime before 3000 B.C.E. Early African agriculturalists planted native crops as well as those from elsewhere, spreading their practice across the continent in a similar fashion as the earlier pastoralists.

At the end of the video, you should be able to:

Midwest Region of the U.S. Lesson for Kids: Facts & History

Jomo Kenyatta Biography & Accomplishments | Who was the First President of Kenya?

Nile River Importance & Resources | What is the Impact of the Nile River?

The Spread of Pastoralism and Agriculture in Africa
Related Study Materials

Midwest Region of the U.S. Lesson for Kids: Facts & History

Jomo Kenyatta Biography & Accomplishments | Who was the First President of Kenya?

Nile River Importance & Resources | What is the Impact of the Nile River?