Honours Bachelor of Physical and Health Education with a minor in English, Bachelor of Education, and Master's degree in Professional Kinesiology. 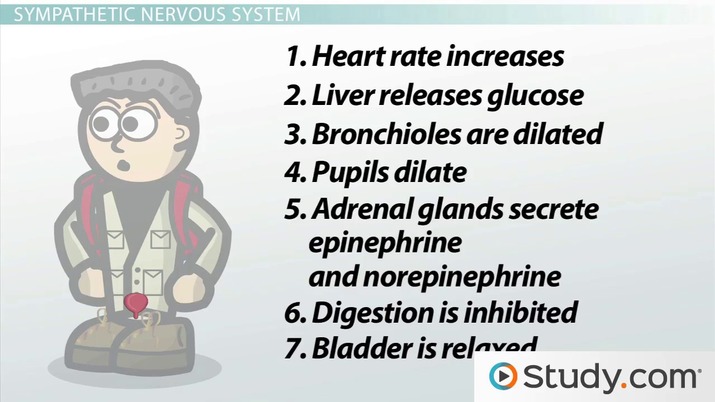 Coming up next: Brain Structures and Functions Part I

This is Phil. Phil is hiking in the wilderness all by himself and enjoying the tranquility of the great outdoors when he turns a corner and finds himself only feet away from a full-grown bear. In a fraction of a second, the brain recognizes the animal in front of him as a bear and classifies it as a very big threat. Immediately, the sympathetic nervous system is activated and without any conscious control by Phil at all, several body functions are affected all at once:

1. Heart rate is increased. Increased heart rate results in an increase in oxygen and nutrients that reach the brain and muscles, preparing them to deal with whatever Phil will have to face.

2. The liver is stimulated to release glucose into the bloodstream providing more energy that will be ready to power the muscles in case it is needed.

3. The bronchioles in the lung are dilated to allow more air into the lungs, which will increase oxygenation of the blood and keep up with the increased flow of blood through the lungs due to the increased heart rate.

4. The pupils of the eyes are dilated. Because the sympathetic nervous system is often activated when people are surprised, pupil dilation is a visual cue that we use to read surprise on people's faces.

5. The adrenal glands are stimulated to secrete epinephrine and norepinephrine. The adrenal glands are a pair of hormone-producing glands located on top of the kidneys that respond to stress. Together, the epinephrine and norepinephrine secreted by the adrenal glands have the same basic effects as the nerves of the sympathetic nervous system by increasing heart rate, increasing bronchiole dilation, and increasing glucose release from the liver. In addition, norepinephrine is also known to increase alertness. It may seem redundant that these hormones have the same actions as the sympathetic neurons, but hormones have longer lasting effects than nerve impulses, so while the initial fight or flight response is mediated by neurons, these hormones serve to reinforce and help to sustain the response.

6. Digestive activity is inhibited. In the moment of truth, a person may need every last ounce of energy they can muster. If Phil makes it through this ordeal, then he'll have plenty of time to complete digestion of whatever he ate for breakfast.

7. The bladder is relaxed. After all, this isn't the time for a person to relieve themselves; there are more pressing matters at hand. Even so, I'll bet that some of you out there are thinking, 'Hold on, I thought that people wet themselves when they get scared!' It turns out that the sympathetic nervous system is only activated in situations where the brain decides that there is a reasonable chance of survival. In very extreme cases of danger where the chances of survival seem remote, crippling fear often takes over and people can lose bladder and bowel control. They may also go limp and play possum as last-ditch efforts to survive.

This is not a complete list of all of the functions regulated by the sympathetic nervous system, but it does include most of the major functions that would come into play in Phil's situation with the bear. As it turns out, Phil opted for flight over fight, and ran away. He ran for almost a whole half-mile before he dared to stop and turn around, but he could have easily run further if the need was there because his sympathetic nervous system had prepared him almost instantly to run for his life!

When Phil turns around and sees that the bear is nowhere to be found, his parasympathetic nervous system begins the process of relaxing and calming the body so that it can recover from the heightened physical and metabolic activity.

Some of the effects of the parasympathetic nervous system are:

1. Heart rate is decreased. With the danger behind him, Phil no longer needs increased blood supply to his muscles, so the heart can slow down and conserve energy.

2. The liver stops releasing glucose into the blood and instead focuses its activity on producing bile and detoxifying dangerous substances.

3. The bronchioles in the lung are constricted to allow less air into the lungs. Now that heart rate is decreased and oxygen consumption in the muscles will be lower, the body doesn't need as much oxygen.

4. The pupils of the eyes constrict back to a more normal size.

5. The adrenal glands stop secreting epinephrine and norepinephrine. Now that the danger has passed, it's time for the body to relax and recover, and these two hormones are counterproductive to resting and relaxation.

6. Digestive activity is stimulated. Phil survived his encounter with the bear and his body can now continue digesting his breakfast. He'll need the energy to replace some of the reserves he used to run away from the bear.

7. The bladder contracts. Without an immediate threat around, Phil may now feel the need to relieve himself if he has a full bladder.

Again, this is not a complete list of all of the functions regulated by the parasympathetic nervous system, but it does include most of the major functions that would be affected in this situation.

When an immediate threat is present, the functions of the sympathetic nervous system prepare the body for extreme physical activity and include: increased heart rate, glucose release from the liver, bronchiole dilation, pupil dilation, secretion of epinephrine and norepinephrine from the adrenal glands, relaxation of the bladder and inhibition of digestive activity.

Once the threat is gone, the functions of the parasympathetic nervous system promote relaxation and recovery of the body and include: decreased heart rate, bile production in the liver, bronchiole contraction, pupil contraction, inhibition of the adrenal glands, contraction of the bladder and stimulation of digestive activity.

The Sympathetic and Parasympathetic Nervous Systems

The History of Animal & Human Evolution

Cranial Nerves: The Vagus Nerve and its Functionality

Detailed Structures of the Eyeball

The Central and Peripheral Nervous Systems