Jennifer has a Masters Degree in Business Administration and pursuing a Doctoral degree. She has 14 years of experience as a classroom teacher, and several years in both retail and manufacturing.

In economics, the Taylor rule helps central banks determine how interest rates should be changed to promote economic growth. Explore the definition, formula, and examples for the Taylor Rule in economics, learn the formula for the rule, and recognize its benefits and limitations. Updated: 10/15/2021
Create an account

Definition of the Taylor Rule

The Taylor rule, created by John Taylor, an economist at Stanford University, is a principle used in the management of interest rates. For example, central banks use the rule to make estimates of ideal short-term interest rates when there is an inflation rate that does not match the expected inflation rate. A central bank is a national bank that oversees a country's commercial or governmental banking system, such as the Federal Reserve System. It may also distribute currency or oversee monetary policies.

It is also useful when the expected gross domestic product (GDP) is different from the actual GDP growth in the long term. The GDP is the total cost of products and services delivered by an individual country in one year.

The main aim of the Taylor rule is to bring stability to the economy for the near term, while still sustaining long-term expansion. Let's take a look at some of its guiding principles. 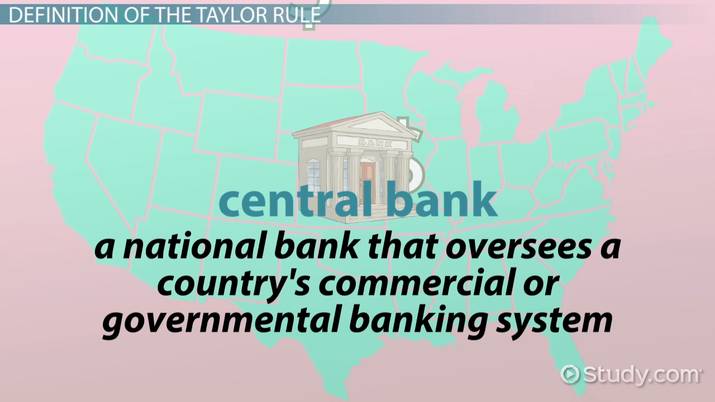 Coming up next: What is Economics? - Definition, History, Timeline & Importance

Key Factors of the Taylor Rule

The Taylor rule is based upon three factors:

Formula for the Taylor Rule

Below is a simple formula used to calculate appropriate interest rates according to the Taylor rule:

Let's break down the formula and explore what each one of the terms means:

How Does the Formula Work?

While you can find some Taylor rule calculators online that will do the work for you, let's explore an example to see if you can perform the calculations yourself.

We'll use the following variables:

Now, let's plug those variables into the target rate formula:

When compared to the targeted rates, the increased rate of inflation and the anticipated growth in GDP has made it necessary to increase interest rates to cool down the economy.

Benefits and Limitations of the Taylor Rule

There are three major benefits to using the Taylor rule:

For a quick recap, here's the formula for the Taylor rule and its variables explained:

What are the three factors on which the Taylor rule is based?

Calculating the Size of an Expansionary Gap

Factors That Shift the Phillips Curve