Attribution Theory asserts that people's own thoughts and beliefs influence how they perceive other people and situations. Explore internal and external attributes, the three determinants, and how we 'see what we want to see' in organizational behavior. Updated: 09/19/2021
Create an account

We See What We Want to See

John rushes in the front door, slams his briefcase on the kitchen table and runs upstairs. You pass a friend at the mall and he does not have time to talk to you. Sarah is sitting at her desk laughing hysterically while the phone rings.

All of these are examples of attribution theory, which is how people interpret events and, in their minds, relate them to the way they think or behave. You see, each of you listened to those situations and attributed the actions of the people in those situations based on your thinking and how you behave. It is important to us as humans to understand why individuals behave like they do, and this is the foundation of attribution theory. We can either interpret situations we are in and figure out why we acted the way we did, or look at others and try to determine why they acted the way they did. 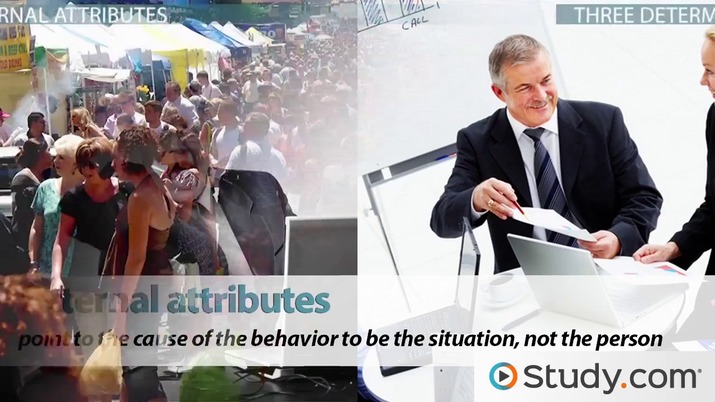 Try it now
Back
Coming up next: Attributional Bias in the Workplace: Self-Serving Bias and Fundamental Attribution Error

Three Determinants of this Theory

As we try to understand the causes for the actions of others, we must look at three aspects that help us to understand those actions. Those three areas are consistency, distinctiveness and consensus. Let's take a look at these first.

First, let's look at consistency. Well, just like it sounds, it's consistency. As it relates to attribution theory, we are trying to figure out if the person acting the way they are would act the same way given the exact same set of circumstances. If the person does act the same way when given the same set of circumstances, we can say they are consistent or that consistency is high. If they do not, we can assume that they are inconsistent and consistency is low. So, if a person is in a meeting at work and is talking a lot, and we put them in another group of people outside of work and they continue to talk a lot, they are consistent in their behavior.

Next, we have distinctiveness. Here we are trying to see if the person acts the same way in different types of situations. If the person does act the same way in different types of situations, we say distinctiveness is low. Or, put in clearer terms, their actions are not distinctive to a specific type of situation. If we have someone who is speaking to a group of underperforming salespeople and they are yelling and aggressive, yet when we observe them talking to underperforming production workers and they are calm, we can say their behavior is distinctive.

Finally, we have consensus. When taking into account consensus, we are trying to determine if other people, put in the same situation, would act the same way. In reality, here we are seeing if others would act the same in the same situation. The underperforming salespeople are a good example to refer to again. If other people in that situation are not screaming at the top of their lungs at the salespeople, then consensus is low.

As you can see, in our minds we are attributing why people act the way they do in a given situation. As we discussed, attribution theory is how people interpret events and, in their minds, relate them to the way they think or behave. The behavior can be centered internally, or caused by internal attributes, wherein the behavior is being caused by something inside the person, or by external attributes, which points the cause of the behavior at the situation, not the person.

When you have finished this lesson, you should be able to:

Consumer vs. Producer Perceptions of Quality